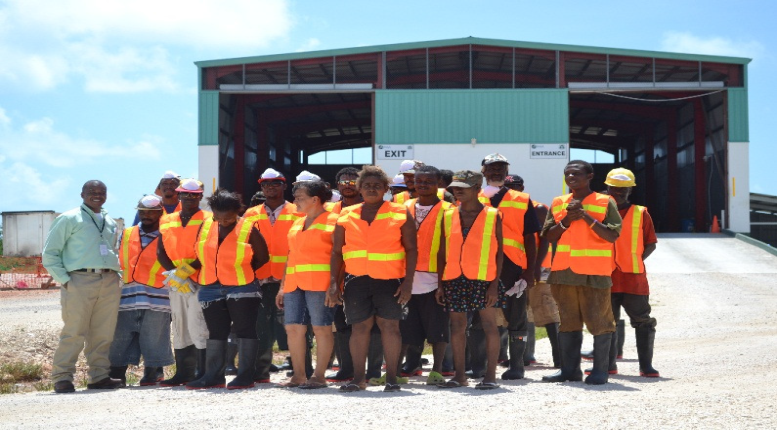 A feeling of sadness ran through me as Carmelita told me about her life growing up in the “jungle”. The “jungle” as Belize City residents would know, was the old unsightly dumpsite at mile 3 on the George Price Highway that used to overwhelm the outskirts of Belize City with a horrible stench. Prior to the Solid Waste Management Project financed by IDB, the previous open dumpsite caused tremendous environmental problems for the people living near the site.

The people most affected by the conditions of the open dumpsite were the ones who were called “scavengers”; a group of marginalized people. Most of them lived in the immediate area of the site, and would sort through the garbage in deplorable working conditions to recover recyclable materials to be sold as a source of income to provide for their families. Frequent fires on the site often caused difficulties in accessing materials for their daily income; but more tragically it posed serious potential health risks to them as well. Carmelita recalled her days as a “scavenger” searching through an endless sea of trash for something ‘to hustle’, under the scorching sun.

Some days were particularly difficult for Carmelita because she would search all day and find hardly anything to sell for little to no value. Sometimes nothing at all. It almost felt like an impossible task to find the more lucrative items like copper, jewelry, or even money. She has tried other income generating activities in the past, like selling food, but it could not pay the bills.  Carmelita also revealed that she has five “pickni” that she has to take care of and searching in the jungle was the best way she knew how to do so. She described past conditions as rough, swampy, hot; she often had no place to sit down, and even worse, she would have to go bathroom in the bush where she often encountered snakes.

However, I started feeling relief and joy as Carmelita mentioned how things began to improve when the Government of Belize partnered with the IDB and OPEC’s Fund for International Development to close the old dumpsite, create a transfer station and build a new sanitary landfill at mile 24 of the George Price Highway.

New sanitary landfill at Mile 24 of the George Price Highway

Besides solving a major environmental problem and uplifting the aesthetics of the city, this project also included a social component, where informal recyclers who once scavenged at the Belize City and San Ignacio/Santa Elena dumpsites were now incorporated as official recyclers, recovering and sorting municipal wastes arriving by truck to the facility. This particular aspect of the project is not just about picking up bottles and selling them, the recyclers are an essential and important part of the bigger picture for the preservation and upkeep of the environment.

Since the closing of the dumpsite and the inauguration of the newly constructed transfer station in Belize City, the enhancement of the physical environment has been accomplished. More importantly, the much improved conditions were able to spark motivation within the group to be better organized. They now want to be called “the Belize City Recyclers.” This attitude demonstrated how these people saw themselves in the wider scope; fully understanding the role they play preserving the environment and to better advocate for their livelihood in order to improve the living standards for their families. The Belize Solid Waste Management Authority has been working closely with the recyclers from the inception of the project, having the recyclers participate in various trainings such as Basic First Aid, Occupational Safety and Health and equipping the recyclers with protective equipment.

The IDB chooses an integrated approach to projects, because the investment in people is as important to the success of any project. As I listened to Carmelita, she mentioned thoughts of the future for her and her children, hoping to continue to grow and learn with more training; enabling her to give a good level of education to her children. As part of the overall Solid Waste Management Plan, the IDB will support future activities to assist the recyclers in the creation of a cooperative. This would potentially ensure worker protection, access to social services and further improve their income generation as well as value added trainings for capacity building.