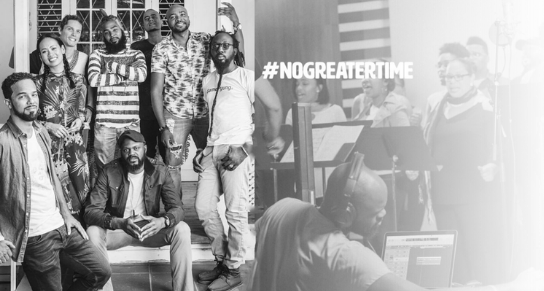 For many Trinidadians the present quarantine measures stir up memories of another time when we all had to stay at home. In 1990 the Jamaat al Muslimeen, a local Muslim group, attempted to overthrow the government of Trinidad and Tobago. Insurgents held the cabinet hostage at the parliament building. While other members of the Jamaat seized control of the national broadcaster Trinidad and Tobago Television (TTT). This led to 6 days of negotiations between the Jamaat and the state. During that time over 20 people lost their lives and there was widespread looting and arson in the capital city of Port of Spain.

When the government was reinstated and the curfew was lifted, the national morale was deeply wounded. And so, as they have always done, the musicians came to our rescue. I was 6 years old at the time, but I remember the desolated streets and images of broken store front windows. I also remember the music that was a balm to sooth our pain.

“Let the flowers bloom again” by Denyse Plummer was the song that stitched us back together. It was played on national television and radio stations, children sang it at school, it was one of the songs that made up the soundtrack of our recovery. We sang:

“As we journey ever onward

Let’s laugh and dream together

And let the flowers bloom again.”

And now, once again music might be our panacea. No Greater Time is a project by a group of Trinidad and Tobago’s most celebrated musicians working with Together WI, a platform co-founded by Anya Ayoung-Chee, who is a member of IDB’s NextGen board. The No Greater Time song features over 35 artists ranging from calypso legends David Rudder and Tambu, to the inimitable Ella Andall, to contemporary soca stars Kees and Destra, and Trinidad’s youngest soca and calypso monarchs, Voice and Aaron Duncan.

The song is healing, not just for us, but also for the musicians who created it:

“An opportunity to put something good out there.”—Darryl Gervais

“We were all feeling like something changed, and something needed to be said, so we started to speak…” —Kees Dieffenthaller

“It is important for artists to come together and reflect their times, and even more so, give answers to some of the problems of their times.” —Muhammad Muwakil

“As the only non-Trini involved, I’m in a unique position – this song is an opportunity for me to give back. The core of its message, togetherness and love is something I strongly believe in.” —Neel Dwala

The lyrics of the No Greater Time song address the particular challenges being faced by Trinidad and Tobago. It is a rallying cry for citizens to take individual action against social ills such as crime. According to Together WI “There is no greater time to be invested in a better future for our country.”  But now, in this time of the Coronavirus pandemic, the song is a dose of inspiration for the world. It says:

“We blessed the world with harmony

No greater time for love

No greater time for peace.”

Over the years Trinidad and Tobago has offered the world many musical forms including calypso, soca and chutney-soca. We’ve used music to bridge racial divides and heal internal conflicts. And now, at a time of global stress, we offer our gift of song again. There is No Greater Time.

To learn more about Together WI and the making of the #NoGreaterTime song and music video click here.