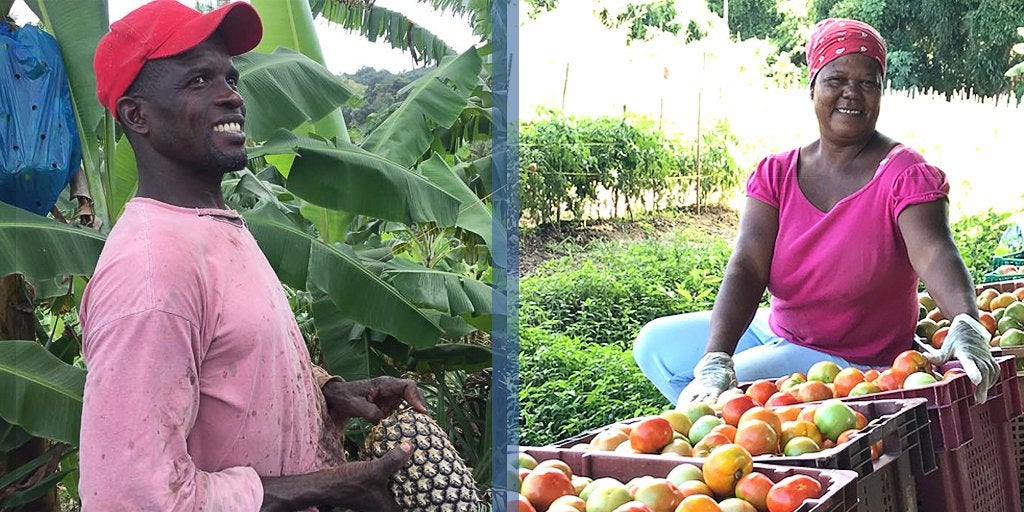 The island of St. Lucia, located in the Windward Islands chain of the Caribbean, has traditionally depended heavily on the production of bananas as a driver of exports and its Gross Domestic Product. However, the combination of loss of access to preferential EU markets and the accelerated impact of climate change, specifically increased temperatures and changes in rainfall patterns, has resulted in a significant decline in the island’s agricultural and fishing sectors. These economic and climate changes have had a negative impact on the livelihoods of St. Lucia’s farmers and fishermen, and have increased St. Lucia’s vulnerability to various food security issues.

To enhance the productivity and sustainability of livelihoods in local agricultural and fisheries production, particularly in the context of climate change, two parallel but inter-related changes are needed. First, as illustrated by a recent study, there is a need for training and technical support for producers in the adoption of more climate-resilient technologies and practices to increase both productivity and the quality of output. Second, small scale producers that dominate the regional agricultural sector in the Caribbean region require incentives in the form of greater access to higher value markets if they are to invest time and finances in the adoption of new farming methods.

In this context, the Multilateral Investment Fund (MIF) member of the IDB Group and the IDB Climate Change Division joined forces with the Laborie Co-operative Credit Union (LCCU) in St. Lucia on a project that will help farmers and fishers in the southern region of that country to transition from fishing and farming to agri-business operations, while improving their resilience to climate change. The project is known locally as SABLE (Sustainable Agribusiness for Laborie and Environs), and it is the first project prepared by the IDB in cooperation with Saint Lucia and the Caribbean Development Bank (CDB). Based on a memorandum of understanding signed in 2017 between the IDB and the CDB, both institutions renewed their commitment to collaborating on projects that contribute to sustainable economic development in the seven full membership nations of the Organization of Eastern Caribbean States, including Saint Lucia.

The SABLE project is funded by the MIF, the Pilot Project for Climate Resilience (PPCR) and the PROADAPT program and it will fund the following activities:

• Develop financial support for the adoption of climate resilient practices and technology;

• Set up an insurance facility to provide farmers with insurance products to protect their investments and loan liabilities;

• Enable Black Bay Farmers and Consumers Co-operative (BBFCC) and Laborie Fishers and Consumer Co-operative (LFCC) to become viable co-operatives, capable of organizing their members to ensure that quality, pricing and quantities of produce required by the market are achieved and maintained; and,

• Develop and leverage sustainable and profitable markets for agricultural producers.

At the project launch, held in Castries on January 30, 2018, the Prime Minister of St. Lucia Allen Chastanet pledged his government’s support for the project and congratulated the IDB, the MIF, the CDB, and Laborie Co-operative Credit Union for structuring the first private sector-led approach to expanding climate smart agricultural practices. In his remarks, Prime Minister Chastanet noted the importance of expanding the agricultural sector’s linkages with Saint Lucia’s tourism economy, notably with the planned addition of over 500 hotel rooms and a cruise ship terminal in the south of the island, both of which are in close proximity to the targeted farming communities.

We at the IDB and the MIF will be working in close collaboration with the Laborie Co-operative Credit Union and hope to share with you more updates as this project progresses.

Lorena Mejicanos leads the Multilateral Investment Fund operations in the area of climate change. She has experience in renewable energy, climate smart agriculture, natural capital, value chains and recycling in Latin America and the Caribbean. Prior to joining the IDB, she worked for the private, public and international development sector.