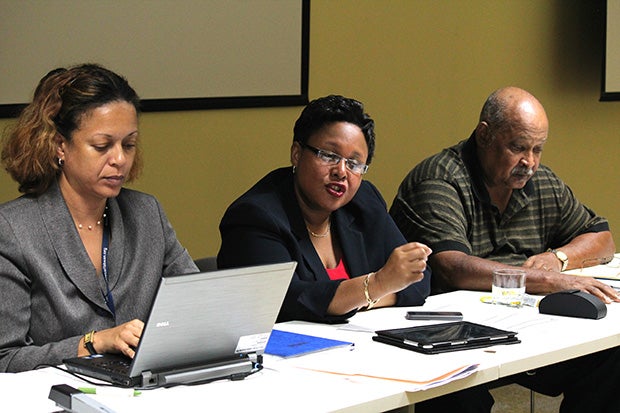 The IDB’s Barbados Civil Society Consulting Group (ConSOC) recently held a tripartite meeting with representatives of the Government and the IDB.

According to Chairman, of ConSoc Lynette Holder, who is also the CEO of the Barbados Small Business Association, the purpose of the meeting was for the ConSOC members to hear the state of implementation of Barbados’ IDB-funded loans.  Holder said that she was keen to see the ConSOC group achieve some tangible results.  The Barbados ConSOC has therefore planned a year of activities that include reaching out to the wider ConSOC sector, media releases and the conceptualization of a developmental project.

The meeting with the government representative kick-started the year for the group and fell within their objective to advocate for on-time execution of IDB-funded projects.

There are currently nine active operations in execution, with a total approved amount of US$142 million: (Perhaps instead of listing the names of the projects, the sectors could be identified?)

Though faced with implementation delays, last year was a milestone year for Barbados as it received one of the highest disbursements level (US$23.7 million) in the IDB’s history on the island.  So what is the formula for last year’s success?  IDB and the Government of Barbados took the following prescription:

As part of its outreach for 2014, ConSOC’s next activity is a training forum entitled “Project Development for Civil Society Organisations” to which a selection of wider civil society will be invited.