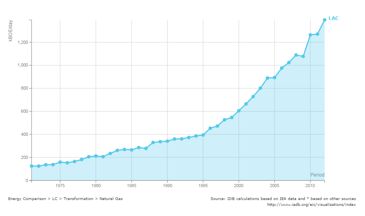 Most experts agree that Latin America’s increased use of natural gas to generate electricity is here to stay. Why? And what could this mean for climate change?

This shift is clearly good news for our planet. The numbers tell the story. According to the U.S. Environment Protection Agency, emissions from U.S. natural gas-fired generation average 1,135 pounds per megawatt hour of carbon dioxide (against 1,672 for oil-fired generation); 0.1 lbs/MWh of sulfur dioxide (against 12 for oil), and 1.7 lbs/MWh of nitrogen oxides (against 4 for oil).  Although the figures might be slightly different for the average plant in Latin America, there are no doubts that the planet is better off with natural gas over oil.

But Mexico is not the only Latin American country to increase the use of natural gas to generate electricity. Over the past few years, natural gas has become the go-to fuel for base load generation when hydropower is threatened. First, the region is running out of river basins to develop. In addition, environmental and social concerns often challenge the completion of such projects.  Third, climate change is creating volatile rainfall patterns and wreaking havoc with the region’s reservoirs.

Take the case of Brazil. From July 2001 to the end of September 2002 the country suffered a nationwide rolling blackout. The “crise do apagão,” as the event was nicknamed, was brought about by low reservoirs combined with lack of planning and investment in generation and distribution. From then on, the government has sought to increase the use of natural gas in electricity generation as an alternative to hydropower in times of need. This was the case in 2008, 2010, and 2012.

2015 is likely to see yet another boost in natural gas use in electricity generation in Brazil. November usually marks the beginning of the rainy season, but that month’s rain levels were 31% below their monthly average. The problem has been particularly acute in the Southeast of the country where, according to the Brazilian electric grid operator, reservoirs were at 16% of their capacity.

Under the circumstances, it is arguable whether Brazil has a better choice than to turn to natural gas. The original source, hydro, is as “green” as it gets. A replacement with a hydrocarbon, no matter how benign, is not an improvement.

Sometimes an increase in natural gas-powered electricity is much better for the environment. Other times, especially when it comes to base-load power, it’s just the art of the possible.