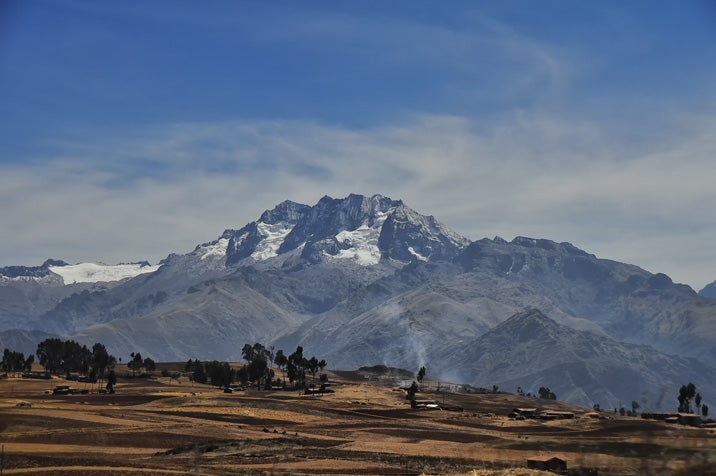 In Latin America, natural resource extraction and economic growth are inextricably linked. However, the exploitation of precious metals and hydrocarbon can also cause devastating environmental damage. A new evaluation of Peru’s largest energy project highlights the important role that environmental safeguards play in mitigating some of the ecological risks while still promoting economic development.

Throughout its history, the fate of Latin America and the Caribbean (LAC) has been inextricably tied to the region’s exceptional wealth in natural resources. Between the 16th and 18th century, Latin America produced 80% of the world’s silver and primarily fueled the monetary systems of Europe, China, and India. In the early 2000s, high prices of commodity exports led to impressive economic growth.

The region is endowed with some of the world’s largest oil, gas and mineral resource deposits. According to some estimates, the region holds almost 20% of the world’s proven reserves of oil and over 4% of global gas reserves, so that the increasing  investment in exploration and exploitation of hydrocarbon and mineral extraction projects is not surprising. In 2016 alone, the pipeline of mining projects totaled over $1 billion, and the region received 25% of global exploration investment flows.

Environmental degradation and the role of safeguards

Despite the positive economic effects that are associated with natural resource extraction, such as creating local employment and a steady flow of government revenues, the necessary large infrastructure investments carry a high environmental risk. Infrastructure extension is among the leading global causes of deforestation, associated with biodiversity loss and increased carbon emissions. As reserves of unconventional oil and gas are increasingly discovered in sparsely populated and biologically and ecologically diverse regions, there is a growing concern that extraction will degrade important local ecosystems and endanger the livelihoods and cultural traditions of indigenous communities.

In the face of significant ecological degradation, environmental organizations, development agencies, and donors have demanded more stringent environmental and social safeguards from project developers. Environmental and social impact studies (EIA) can help identify areas of high ecological value and select appropriate measures such as enhancing property rights, creating and enforcing protected areas and wildlife sanctuaries, to protect the most vulnerable areas. These environmental safeguards are often complemented by social safeguards to protect the livelihoods of local communities affected by infrastructure projects.

Evidence from the Camisea Gas Project

Under what conditions can natural resource extraction then lead to economic growth without causing long-term harm to the environment and local communities? Can environmental and social safeguards help mitigate environmental risk, and make positive economic impacts sustainable? In a recent study, we analyze the regional economic and ecological impacts of Peru’s biggest energy project, the Camisea Gas Project. The Camisea gas fields, located in the Department of Cusco, have proven reserves of 9 trillion cubic feet of natural gas. In 2000, Peru’s government awarded licenses to develop the Camisea field and to build and operate a 700 km pipeline to the Peruvian coast. Since the project’s operational inception in 2004, Cusco has enjoyed significant fiscal windfalls, receiving approximately $300 million in annual revenue.

The Camisea fields are located deep in one of the more pristine parts of the Peruvian jungle and their exploitation faced significant opposition from environmental protection groups. Its opponents at the time claimed that the project threatened tribes of Amazon Indians, rare species and the rainforest. This led the Inter-American Development Bank, which provided a $75m loan for the pipeline construction, to condition its financial commitment on stringent environmental and social safeguards designed, in coordination with key stakeholders, to curb any adverse effects on local communities and ecosystems. To minimize the risk of colonization and illegal extraction activities, project design modifications included using an “offshore” technology, operating drilling sites as if they were islands in the jungle, so that workers and supplies were helicoptered in, and no access roads were built. To protect native communities’ territories near the Camisea Project, four new protected areas covering close to a million hectares were created, and property titles were improved or newly issued to more than 60 native communities and 10,000 property owners.

Can growth and conservation go hand in hand?

To carry out the evaluation, the study employed rich time series data from administrative sources and satellite imagery to capture economic growth (as approximated by remotely sensed night-light density), and changes in deforestation rates, along with other relevant variables. The results indicate that the Camisea Gas Project had a positive impact on local economic growth, measured by an annual impact of approximately 7.5% in Cusco’s GDP. Despite the feared adverse environmental consequences, our analysis does not detect any significant negative effects on deforestation during the eight available years since the gas fields took up operation.

Taken together, these findings suggest that the Camisea Gas Project has contributed to the sustainable development of Cusco, creating long-term economic benefits for local populations and the environment due to the explicit commitment to actions geared towards protecting the area’s vulnerable ecosystems and native communities. The evaluation offers important lessons for how natural resource extraction can be developed to realize long-term benefits within fragile environments. Of course, future research in this vein is necessary to further assess the economic and ecological impacts of large infrastructure projects, to identify specific safeguard mechanisms that are most effective at avoiding negative impacts, and to measure additional impacts of environmental importance beyond deforestation, such as biodiversity.

Maja Schling is an economist in the Environment, Rural Development, and Disaster Risk Management Division (RND) of the Inter-American Development Bank. She has substantial work and research experience in international development, specifically in the areas of agriculture, natural resources, and climate change. In the last five years, she has been involved in the design and implementation of impact evaluations for numerous agricultural and natural resource projects throughout the LAC region, including animal and plant health projects in Brazil and Mexico, agricultural extension programs in Guyana and Argentina, and a coastal protection program in Barbados. Her work currently focuses on incorporating innovative data sources and methodologies into evaluation strategies to capture all possible dimensions of impact – economic, social, and environmental – with the goal of improving the effectiveness of future interventions. Prior to joining the IDB, Maja obtained a Ph.D. in Economics from American University, and worked with the NGO Impact Network to evaluate their schooling program in rural Zambia.