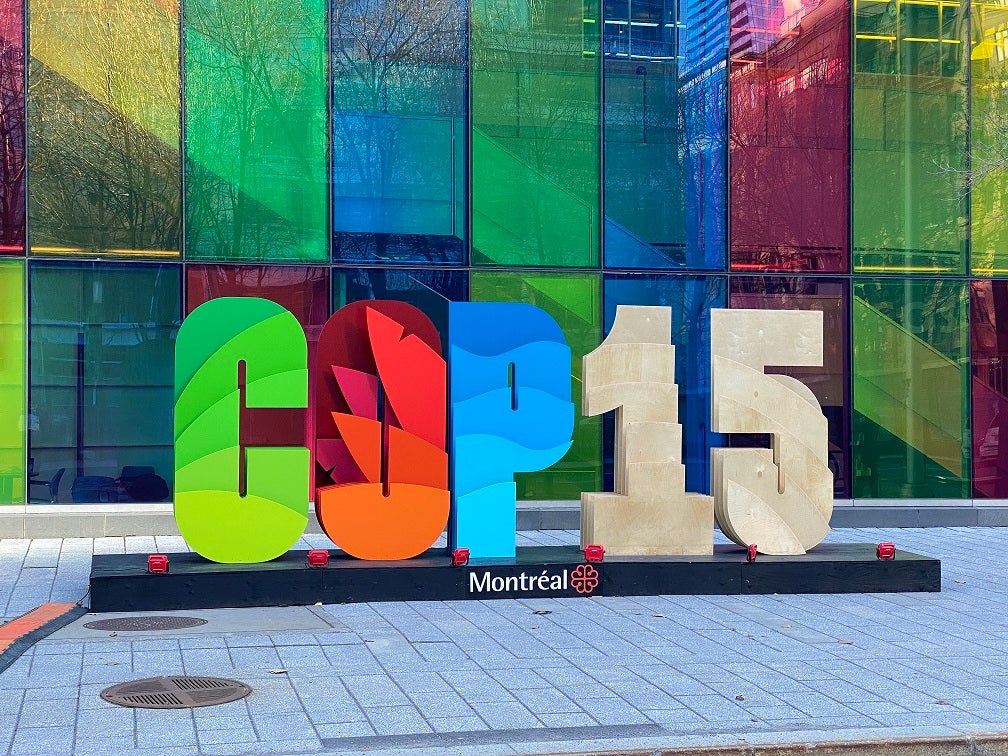 The fact that COP27 occurred on the African continent demonstrated the important role of developing countries in climate adaptation, mitigation (reduction) of greenhouse gases, and combating biodiversity loss – three key elements of the fight against climate change. But unfortunately, the conversation often focuses on the first two, and we cannot leave biodiversity aside.

COP15, the sister UN conference on biological diversity, ended in Montreal. Having two of the most important environmental conferences in a row demonstrates that the world is taking climate change adaptation and mitigation issues and their connection to biodiversity and nature more and more seriously.

COP15 had one central objective: to agree on new targets to protect nature over the next decade through the post-2020 framework of the Convention on Biological Diversity (CBD). A unique opportunity to set precise targets for reducing deforestation, ecosystem fragmentation, pollution, unsustainable exploitation of natural resources, and other drivers of biodiversity loss. It was also an opportunity to reflect on how global, multilateral, national, and private financial mechanisms can best support these goals’ achievement.

Part of the same problem

We have increasingly sophisticated information and better projections showing that climate change generates biodiversity loss and that biodiversity loss exacerbates the impacts of climate change. The two most important environmental threats are actually a single, linked process – we need to stop addressing them in a disjointed way!

Clearly, there are biodiversity conservation, restoration, and sustainable use projects that are not directly linked to climate change. However, we need to ensure that they are given the priority they deserve. Nevertheless, in a period of limited resources, we must look for projects where a dollar spent has multiple impacts on biodiversity, climate change, poverty and inclusion, employment, and infrastructure, among others.

We live in a paradox in Latin America and the Caribbean. On the one hand, the region is home to 40% of the world’s biodiversity, half of the world’s tropical forests, the largest reserve of available freshwater, 12% of the world’s mangroves, and six of the most megadiverse countries. Yet, on the other hand, it is highly threatened by the environmental crisis and presents alarming vulnerability figures – showing how the loss of natural wealth increases climate risks and vice versa.

As if that were not enough, environmental tragedies and risks deepen economic inequalities and generally affect the poorest communities the most. Remote territories, islands, and coastal regions are the most threatened and affected – among other reasons, due to lack of preparedness, precarious health systems, absence of early warning strategies, and insufficient infrastructure.

An excellent opportunity for green growth

Nations and institutions join the fight against biodiversity loss. We must position natural wealth as an ally to solve the Latin American paradox. This can be achieved by promoting green, inclusive, and efficient growth. The energy transition with the possibility of generating multiple jobs is an example of the opportunities.

The protection of nature is not only a goal but is also a means to protect us from climate change, and it is a financial investment that can yield positive cost/benefit results. For this reason, we must stress the urgency of boosting financing for natural capital and biodiversity, which are fundamental regional assets. In short, a new approach that puts sustainability at the center increases productivity and boosts resilient and just economies.

Multilateral banks are already moving to strengthen this approach. For example, at COP26, 10 multilateral banks committed to integrating nature into their policies and significantly boosting related financing among their member countries. In addition, through the IDB-led Joint Statement on Nature, People, and Planet, the banks committed to helping countries define and implement their sustainability strategies.

Post COP15, we took on the challenges of mainstreaming biodiversity within the IDB, which implies a strategy dedicated to incorporating natural capital and biodiversity into operations, as well as increasing our biodiversity financing in the future, fundamental conditions to help land the means of implementation of biodiversity projects in the region. Key to this will be establishing financial mechanisms, resource mobilization, capacity building, and technical cooperation.

Resource mobilization was one of the points discussed at the conference. It was determined that this is a crucial aspect of implementing the GBF appropriately, effectively, and sustainedly over time. We now know that the success of the initiative will depend, to a large extent, on the articulation between the States, multilateral banks, civil society, academia, and the private sector.

From the countries’ point of view, valuing natural capital is fundamental. In this sense, creating scenarios for investment, policy, and sustainable use of biodiversity by measuring its impact on the planet and people, for example, through methodologies such as the gross ecosystemic product, are viable initiatives with positive impacts.

There are also opportunities to scale up and increase positive financing for nature, including a green finance target setting process and the initiation of a process to study the risk of biodiversity loss.

In addition, programs and partnerships with specific commitments can strengthen biodiversity investments and co-benefits from using innovative products. One example is the use of guarantees linked to policy changes to support debt-for-nature conversions, as has happened in Barbados.

The task is complex, but the good news is that Latin America and the Caribbean have everything to be the region at the forefront of solving both sides of the same problem.

The agreement was called the Kunming-Montreal Global Framework. The most relevant agreed targets are: to protect 30% of ecosystems by 2030, restore strategic ecosystems, reform biodiversity funding, and protect the rights of indigenous peoples.

The GBF is an encouraging early victory. However, given the failure of some agreements in the past, there are doubts about the implementation of the new treaty. Nevertheless, on this occasion, an innovative element could be successful: the creation of a trust fund with precise goals and direction so that the resources reach where they are most needed.

Multilateral banks are crucial players in the area of financing. At the IDB, we understand that nature-positive investments are essential for Latin American economies and for the region’s well-being, which is why we subscribe to the agreed guidelines and are committed to:

We cannot limit ourselves to financing, but we must continue incorporating biodiversity into the Bank’s operations, partnerships, and technical cooperation with the countries.

Below, we highlight some processes that we must continue and that -under the approval of the GBF- will become more valuable. Two years ago, we brought the natural capital and biodiversity agendas together with the climate change agenda. We are convinced of their interconnection and the need for a joint approach. The mainstreaming of biodiversity in governments and national agendas is already a reality in nine countries in the region; based on the lessons learned, we will continue to expand this work to other nations. We currently have 30 infrastructure projects based on biodiversity in the region. We created the Amazon initiative with four pillars: bioeconomy, sustainable agriculture and livestock, human capital, and sustainable cities and infrastructure.

Finally, there is the Bank’s Biodiversity Action Plan, which we will be launching soon. This document is an innovation for the MDBs and will also be our roadmap to make the GBF a reality in our institution as well. Additionally, this document will help this region become an example of the possibilities and benefits of living in harmony with nature.

Relive the event we implemented at COP15 here.