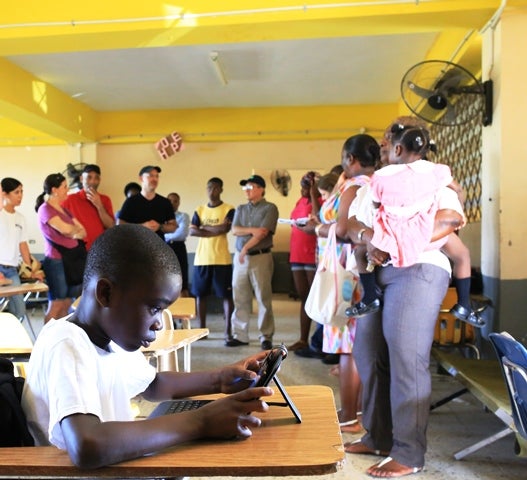 After the recent protests in Baltimore, Maryland, there was discussion among commentators in newspapers and talk shows in the US on how we all have a responsibility in responding to the marginalized, disaffected population that took to the streets over several days in, at times, violent protest.  President Obama commented on the troubling situation and promoted My Brother’s Keeper, an organization he hopes to grow with corporate support to recruit mentors to work with these predominantly inner-city, young African-American males, frequently out of school (or not attending regularly) nor participating in the formal economy.

I recently returned from Jamaica where my employer, the Inter-American Development Bank (IDB), is financing the third phase of the Citizen Security and Justice Program (CSJP); the program also receives important funding from the Governments of Jamaica, UK and Canada.

CSJP works primarily with at-risk youth and their families in 50 high violence communities throughout the island.  Its focus is on people, not infrastructure. It seeks to give people the means to peacefully resolve conflict, to raise children without resorting to violence, to acquire the necessary skills (academic remediation, life skills, job readiness, vocational training) to participate in the formal economy and to promote alternative justice resolution.

During three visits over the past couple of months, I observed how Jamaicans can be extremely warm and welcoming, which explains why it is such a popular tourist destination (in addition, of course, to its warm weather and beautiful beaches).  I also noticed how, at times, Jamaicans can be aggressive and hostile to one another, especially when the interactions involve residents of marginalized communities.  It is puzzling how Jamaican workers in the country’s large and important tourist industry put up with so many demanding North American and British tourists yet they seem to have little tolerance and patience for their countrymen (and women).  As a result, minor disagreements from the classroom or playground to crowded urban streets escalate into different forms of violence.

I experienced first-hand during my recent visits to Jamaica the indifference of certain segments of the private sector to the need to step up and take some responsibility for the country’s marginalized population.

The Citizen Security and Justice Program not only trains but also provides stipends for those who complete the vocational training for internships to test out their newly acquired work skills.  I lobbied a large resort in Montego Bay over several weeks to simply discuss the possibility of receiving CSJP trained young people interested in working in the hospitality industry at no cost to the hotel.  The hotel’s response was one of frustrating indifference.  The resort declined to assign a staff member to hold a short meeting with the CSJP manager to simply find out about the program and possibilities for collaboration.

Over the years it has been challenging for CSJP to develop relationships with private sector employers to give trained youth work opportunities in the formal economy.  There are, however, several examples of private Jamaican companies, including in the tourism sector, that have been highly supportive of the program’s activities. CSJP informed us that in the hospitality industry, one of the only major hotels to work with at risk youth through their corporate responsibility program is Sandals Montego Bay.

It is obvious that Jamaican as well as American businesses need to develop a greater sense of responsibility for responding to the marginalized populations of both countries.  It cannot just be a problem of the government, NGOs or a multilateral development bank.  These populations literally live in the backyards of where these businesses have made huge investments.  If these communities explode, as we recently saw in Baltimore, there is an immediate negative affect on tourism, commercial activities and the profits of these businesses.

What can we do through IDB funded violence prevention programs working with at-risk populations to get greater private sector buy-in?   From my position, it seems like a no brainer for the private sector company.  But as I saw with this resort in Montego Bay over the past several weeks, there are many businesses that do not feel that the problem is theirs.

Subscribe to our email blog alerts. Most blog postings are in Spanish

Joel Korn is the principal operations specialist for the modernization of the state division at the IDB. He has worked in operational divisions, including social programs, water and sanitation and most recently institutional capacity of the state.  Joel also served as the IDB’s deputy representative in Bogotá, Colombia for four years. Joel was born in New York City. and has a Bachelor of Arts degree in Political Science from the State University of New York at Albany and Masters Degrees in Business Administration from the Kellogg Graduate School of Management of Northwestern University and in Public Administration from the Kennedy School of Government at Harvard University.