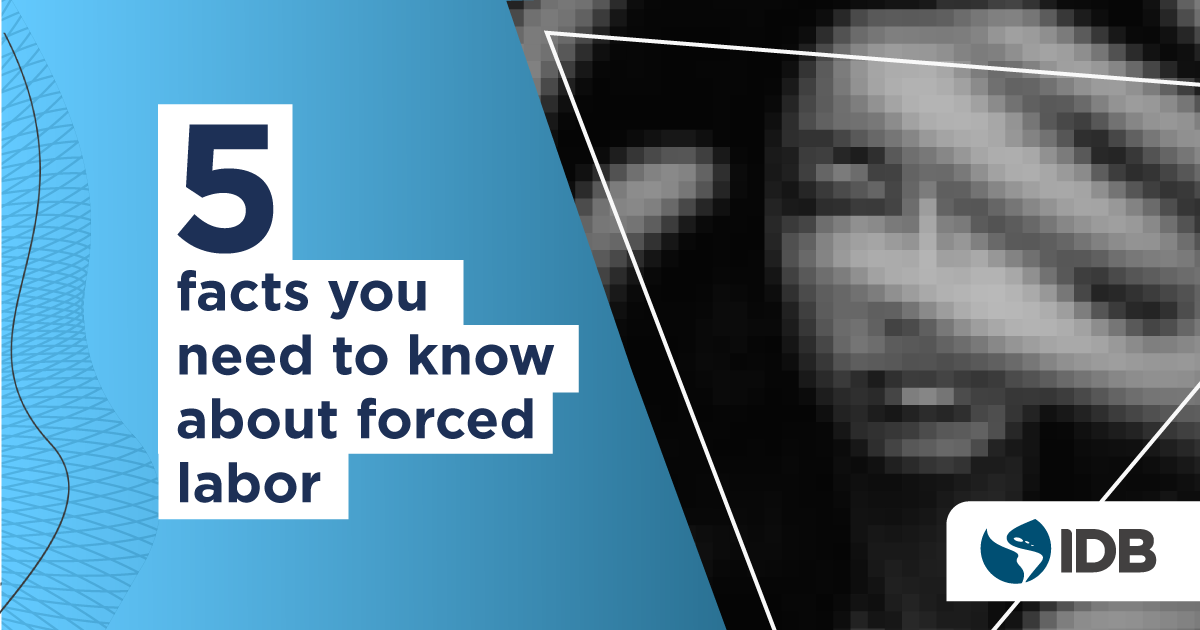 Human trafficking is a crime and a violation of human rights that affects millions of children, women and men around the world. Although sexual exploitation is the most detected and visible form of trafficking, both globally and in Latin America and the Caribbean (LAC), there are multiple additional forms, including forced labor, forced begging, and trafficking for the purpose of organ removal, among others.

In the specific case of forced labor, in recent years the percentage of identified cases has gradually increased. This, in addition to raising alerts, leads us to ask ourselves: What are the particularities of this type of exploitation? How can we better understand this crime in order to prevent it and deal with it effectively? What is the Inter-American Development Bank (IDB) doing to address this problem in Latin America and the Caribbean?

In this blog post we will seek to answer these questions and, at the same time, present you with five basic facts you should know about forced labor as a form of human trafficking.

1. Forced labor is not the same as “modern slavery”

In some spaces, the term “modern slavery” is used to refer more broadly to various legal concepts that include forced labor and other forms of human trafficking as defined in the Palermo Protocol.

However, the United Nations Office on Drugs and Crime warns that this concept is not defined in international law and that its use runs the risk of rendering invisible various types of exploitation with less obvious forms of control, which are not necessarily associated with the traditional concept of slavery.

Almost one hundred years ago, the International Labour Organization (ILO) first outlined this concept in the 1930 Forced Labor Convention. It is defined as “all work or service which is exacted from any person under the menace of any penalty, and for which said person has not offered themself voluntarily.” This definition emphasizes two key elements in categorizing forced labor as a form of exploitation: i) the existence of a threat of penalty or punishment, and ii) its involuntary nature.

2. It is estimated that worldwide, there are 25 million people in situations of forced labor

3. In the Americas more than one million people are victims of forced labor

4. The majority of people in situations of forced labor are women

A study shows that 58% of victims of trafficking for labor exploitation in the private sector economy are women, compared to 42% of male victims. In addition, one in fivevictims of commercial sexual exploitation is a minor under the age of eighteen.

5. Domestic work and construction are the sectors that present the most cases of forced labor

The economy’s five sectors with the highest percentages of cases of forced labor include domestic work (24%), construction (18%), manufacturing (15%), agriculture and fishing (11%), and accommodation and food services (10%).

In domestic work and in the accommodation and food services industry, there is a higher percentage of women in situations of forced labor (61% and 92% respectively). On the contrary, in the construction, manufacturing, and agriculture and fishing sectors, it is men who represent the majority of cases (82%, 82%, and 68%, respectively).

Although these respective industries boast high traditional female and male representation and participation, it is important to incorporate a gender perspective in the approach to studying forced labor in order to avoid biased analysis due to stereotypes about traditional gender roles and norms. This also helps prevent the invisibility of certain victims whose profile is not associated with the traditional profile of the sector.

What is the IDB doing to respond to the challenge of forced labor?

There are major challenges in Latin America and the Caribbean for the prevention and identification of human trafficking, detection of its victims, and prosecution of the crime, including forced labor. To respond to these challenges and in line with Vision 2025, the Inter-American Development Bank (IDB) has a multi-sectoral agenda that includes strengthening the capacity of institutional response, proactive coordination between security and justice institutions and other sectors, and collaboration with the private sector.

Since 2020, the IDB has promoted the “Series of Technical Dialogues on Trafficking in Persons in Latin America and the Caribbean,” which have deepened the knowledge on the response of Citizen Security and Justice institutions to this crime and their coordination with institutions from other sectors. You can find a recount of the Dialogues below:

Additionally, with the participation of 14 countries in Latin America and the Caribbean, the IDB is implementing the Regional Public Good Project: “Regional Model for Strengthening the Capacities of Security and Justice Institutions to Address Human Trafficking in LAC with a Gender Perspective and Focus on Digital Technologies,” which seeks to improve the partaking countries’ response to human trafficking.

The IDB is also developing various knowledge products such as: “Trafficking in Persons in Latin America and the Caribbean: Situation, Trends and the Response of the Security and Justice Sector,” (available in Spanish, soon to be translated to English) which presents a current overview of the situation of the crime of human trafficking in Latin America and the Caribbean. It describes how the crime’s characteristics have evolved in recent decades as well as the institutional capacity-building actions that the region’s countries have implemented to respond to this offense in an active and coordinated manner.

The IDB also recently launched the contest “Gobernarte: the Art of Good Governance – Pablo Valenti Prize.” In this eighth edition, subnational governments in Latin America and the Caribbean are invited to present public innovation projects that address the crime of human trafficking and the challenge of new migration flows.

In addition to these efforts, internally the IDB is committed to mitigating the risk of trafficking in its operations. To this end, in 2021 it launched its new Environmental and Social Policy Framework, which includes a specific standard on labor and working conditions to prevent forced labor.

Understanding the dynamics surrounding the crime of forced labor contributes to strengthening the capacity of the security and justice sector to effectively identify and prevent the wrongdoing and protect its victims. This is why the IDB reaffirms its commitment to continue working hand-in-hand with countries, partners, and allies to eradicate this infamous crime in the region.