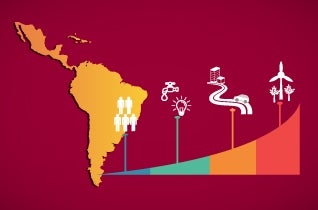 The Inter-American Development Bank is offering the second edition of its Massive Open Online Course (MOOC) on the principal problems and challenges of macroeconomic growth and stability in Latin America and the Caribbean. Two new modules in the course focus on the financial sector and productive development policies.

Entitled Latin American Macroeconomic Reality, the free, seven-week course is intended to give journalists, policymakers and other non-specialists a comprehensive and detailed look at the issues behind the region’s relatively low rates of growth and its recurrent episodes of recession, banking crises, high inflation and currency problems.

Why is growth and productivity low in Latin America and the Caribbean compared to many other regions of the world? Why has it been unable to take advantage of its abundant natural resources to achieve a higher quality of life for its citizens? What are the factors behind its low private investment and inadequate infrastructure?

Prepared by some of the IDB’s top economists and supported by large amounts of their own research, as well as that of the World Bank and dozens of Latin American universities and research centers, the course delves into these questions and many more. Rather than mathematical formulas and jargon, it uses simple, everyday language. Rather than theory, it emphasizes concrete examples from the region’s history and current situation while making use of a gamut of modern teaching tools, including videotaped interviews, to provide a lively narrative.

Examine issues of macroeconomic instability through the history of banking, sovereign debt and currency crises in countries like Argentina, Brazil and Mexico. Understand the risks of overdependence on natural resources by looking at the recent fall in Chinese demand for the region’s products and the factors behind the recent crash in oil prices. Explore the role of central banks by reviewing, among other issues, how the region’s countries use different tactics to control the flow of international reserves.

Economics, with its complex mathematics, terminology, and theory, can be intimidating and, for the non-specialist, even inaccessible. Latin American Economic Reality strives to be the opposite: easy to grasp, fast paced, and peppered with  relevant current and recent historical examples. It will bring into sharp relief the problems that buffet the region and give the student a deep sense of both the challenges that lie ahead and their potential solutions.

Offered in Spanish through Edx, the online learning program founded by Harvard and MIT in 2012, Latin American Macroeconomic Reality begins Oct 11, 2016 and requires approximately 7 hours of work each week for seven weeks. While the course is free, participants can pay $25 for an instructor-signed certificate if they wish to verify their achievement and use it to improve their job prospects.