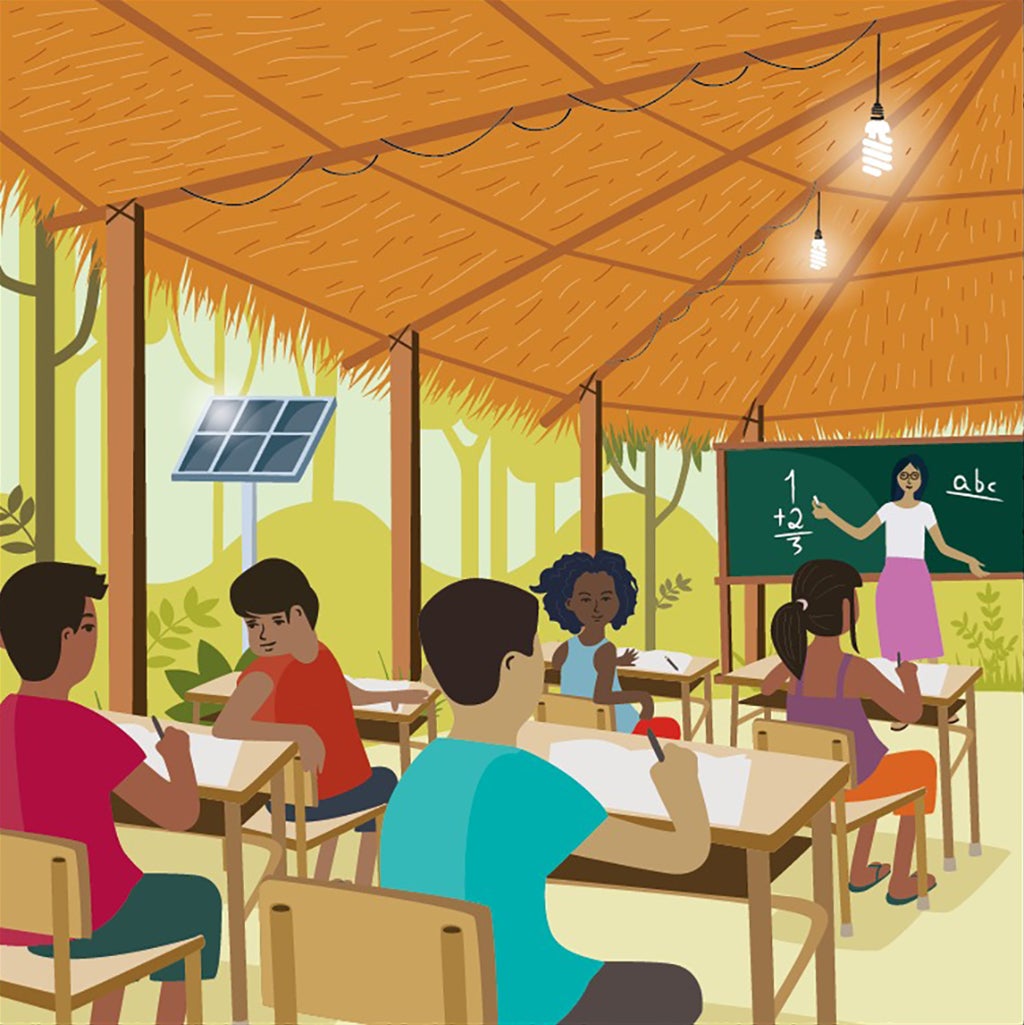 Rural electrification may have a direct impact on reducing primary school dropout, a recent study published by the IDB’s Energy Division shows that Schooling is associated with the reduction of child labor and is considered an important step in the search to reduce poverty cycles of the rural population.

One of the mechanisms used to ensure the universalization of access to electricity has been the programs focused on bringing this service to populations in isolated areas of Latin America and the Caribbean.  Nevertheless, the effects of the access to electric energy on the population’s quality of life, are not always quantifiable.

Some direct effects may be measurable, mainly those related to households, but not the indirect ones.

Light for All in Schools Program

The program “Luz para Todos” (in English “Light for All”,) was created in 2004 for the purpose of bringing electric energy to all rural areas in Brazil.  Among its priorities, we may highlight the electrification of rural schools, especially those located in indigenous communities, ribeirinhos[1] and quilombolas[2]. This program encouraged the creation of the “Light for All Schools Program” (in Portuguese Luz para Todos nas Escolas,) in coordination with the Ministry of Education (MEC) and the Ministry of Mining and Energy (MME), of Brazil.

The challenge to link isolated schools is very meaningful.  The electric companies (distributors) may choose to supply energy service, connecting schools to the network, or may choose as well to provide these communities with distributed generation solutions, such as, solar panels.  However, the access to these schools may be more difficult when it is intended to extend the distribution network to isolated areas or transport the distributed generation equipment.

For instance, one of the schools that did not have access to electricity in 2016, (as reported by MEC), is located in the riverside of Içaná, River, in the State of Amazonas, 24 kms away from the border Brazil – Colombia.  The easiest way to access these school is sailing along the Içaná River, one of the tributaries of the Negro River.

Location of one of the schools lacking Electricity in 2016

Therefore, the cost to provide these schools with electricity is high and the benefits of the supply are not direct, which makes it difficult to elaborate a policy impact assessment. However, one of the advantages of the Luz Para Todos en la Escuela program is the annual data collection executed by the Ministry of Education, allowing the monitoring of the performance before and after the policy implementation.

Providing rural schools with electricity causes improvement in infrastructure as well as benefits for teachers and students.  For example, devices for a better environmental thermal adaptation and systems to purify water may be installed.  In addition, access to electric energy allows a better lighting inside classrooms, enabling students to have more hours to study, more concentration and less reading effort.

Some studies proves that school desertion is closely related to endogenous factors (students’ poor performance) and exogenous factors (such as child labor and bad nutrition habits in extreme poor households) to school cycle.

Other benefits of rural electrification include a broader integration between school and its community. In many rural areas with no electrification, once schools are electrified, they become a key factor in the social, cultural and sports life in these communities.

In our publication, we estimate a short and mid-term impact of electrification in rural schools benefited from the Luz Para Todos en las Escuelas Program.  The average of the assessed schools had a dropout rate of 4.4% in elementary schools in 2013 (children between 7 and 11 years old), and a dropout rate of 3.9% in 2016.

Average drop in the school dropout rate because of electrification

In conclusion, the Luz Para Todos en las Escuelas Program, has been very successful in promoting the reduction of school dropout indicators.  This improvement in schools may be potentially reflected in the benefits for the community development indicators, such as reduced child labor rates, in a long term, as well as the development of new social and economic activities.

[1]  Communities living on the Amazonian riverside.

[2]  Centennial communities founded by men and women who sought to exit their slavery condition.

[3] MEC’s assessment was conducted between February 2014 and June 2015. In spited of the delays in the   publication of the geolocation, some schools had already received the program in an organic way.

[4] The educational program is not the same for all schools. In some schools, the classes are conducted in native languages ​​of the indigenous peoples and the activities are integrated into the community.

Alexandre Mejdalani was a consultant t the Inter-American Development Bank and worked on research projects in the Energy Division, Infrastructure and Energy Sector. He holds a master degree in Applied Economics from the Federal University of Juiz de Fora (Brazil) and is currently a Ph.D. Candidate in Economics at the Fluminense Federal University (Brazil). His topics of interest are energy market design and clean technologies transition.

Roberta is a Ph.D. student in Economics at Federal Fluminense University (UFF) and holds a Master’s degree in Economics from y the same university. She is a member of the Center for Studies on Inequality and Development (Centro de Estudos sobre Desigualdade e Desenvolvimento, CEDE, in Portuguese). Her areas of study are Welfare economics and applied microeconomics, with a focus on economics of education and labour economics.