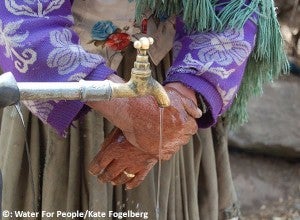 Dr. Atul Gawande in his fascinating book “Better” reports his bewilderment on the mystery on why “the meticulousness of the operating room has not spread beyond its double doors”: even after a year-long campaign in the Hospital in which he works in Boston, 30% of all doctors still did not follow standard hygiene protocols.

The Centers for Disease Control and Prevention estimates that in the US roughly 1.7 million hospital-associated infections cause or contribute to 99,000 deaths each year.

It is quite astonishing that restroom users in New York have better hand washing habits. A recent article in the New York Times reported that 80 percent of people using the restrooms at Pennsylvania Station and Grand Central Terminal washed their hands.

Washing your hands matters a lot. According to the World Health Organization, “Nearly one in five child deaths – about 1.5 million each year – is due to diarrhea”: more children die in the world each year from diarrhea than AIDS, Malaria and measles combined. And washing hands is probably the most effective and cheapest alternative to avoid diarrhea.

A recent study by Harvard researchers Victoria Fan and Ajay Majal shows that hand washing can reduce the prevalence of acute watery diarrhea by 58%and diarrheal duration by a third.  Gel sanitizers can also be effective.

In Colombia, a randomized controlled trial (RCT)in child day care centers showed that the risk of acute diarrheal decease decreased by as much as 50% when sanitizers are regularly used.  And hand washing can be a factor in school absenteeism.

A 2002 study in the US showed that absenteeism is 50.6% lower in the group that washed hands regularly.

In China, the provision of a large-scale hand washing promotion program was associated with significantly reduced absenteeism.

So we know that washing hands can save millions of lives, particularly of children.  What we know a lot less on why hand washing is not more prevalent and widespread, particularly when we are with kids around.

One study in Colombia, while stating that only 33.6% of school children reported washing hands always or very often, identified that “scarcity of adequate facilities in most schools in Bogotá prevents children from adopting proper hygienic behavior and thwarts health promotion efforts”. Nevertheless, both the sanitizer study in Bogotá and the controlled trial in China mentioned above showed that simple sanitizers or informational campaigns can be very effective.

Maybe the solution is a hard as washing your hands, particularly after having celebrated on October 15, World Hand washing day.  Please wash your hands after reading this post.