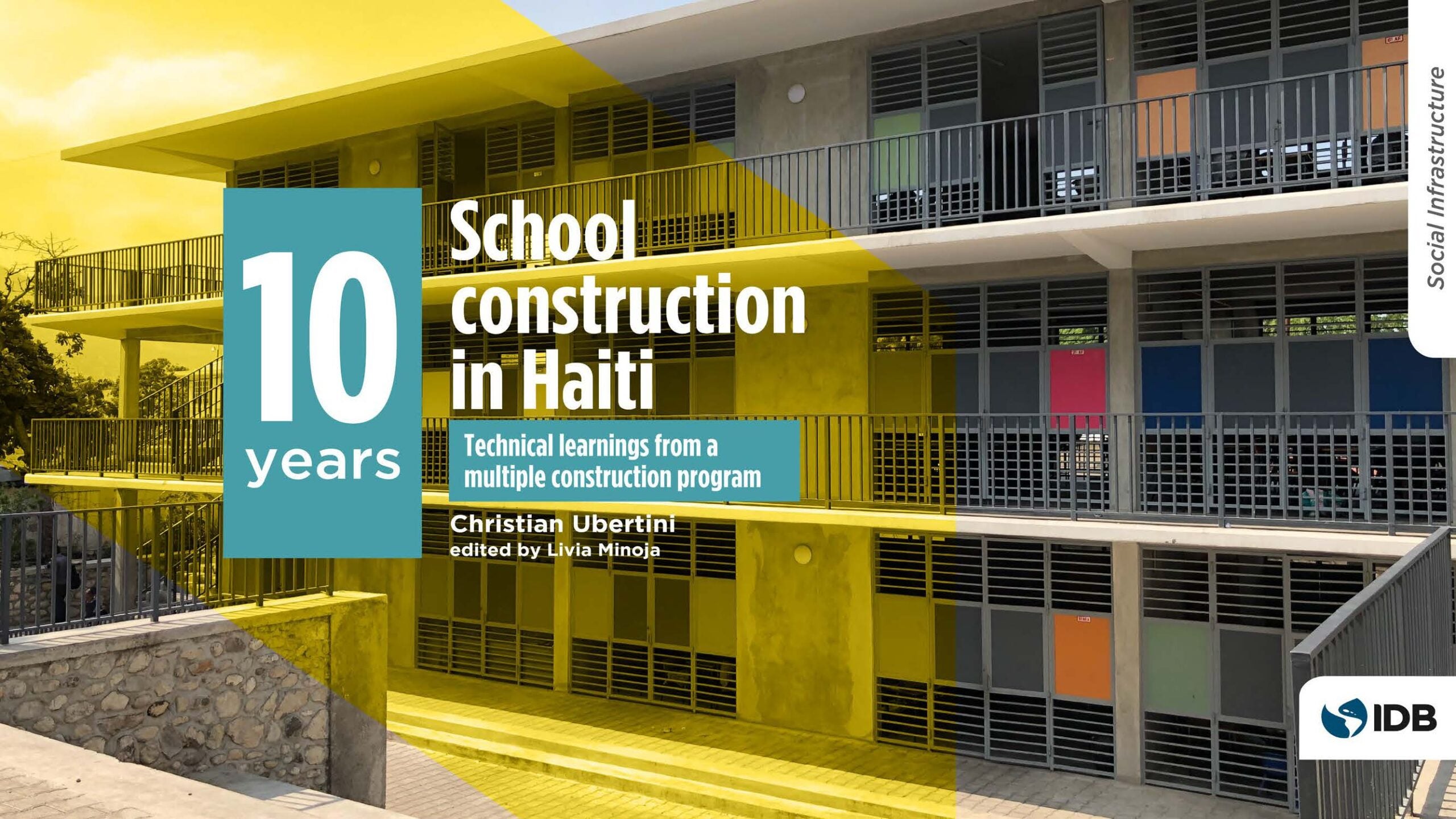 In the aftermath of the 2010 Haiti’s earthquake, the Government of Haiti faced massive reconstruction needs in all sectors. In the education sector alone, the Ministry of Education (MENFP) stated that 82% of the schools (public and private), located in the affected regions, were damaged or destroyed[1] (i.e., 4,000 schools damaged and 2,000 destroyed out of 7,300 schools located in the affected regions).

The earthquake was part of a long series of disasters that regularly damage or destroy school infrastructures, at a faster pace than the country can rebuild. Various cyclones during 2008 and Hurricane Matthew in 2016 combined, have affected nearly 13,000 schools countrywide – about 70% of the 18,000 schools registered in Haiti.

As part of the response of the Government of Haiti to the massive reconstruction needs, from 2010 to 2020, the IDB designed a series of grant operations[1] plus seven co-financings[2] designed to support a wider School Reconstruction Program.

These four operations allowed, among other achievements, the (re)construction of 90 public schools countrywide, creating approx. 1,000 classrooms and 40,000 seats, but most importantly providing a safe and comfortable learning environment for approximately 60,000 children each school year[3].

The journey to complete the construction of the 90 schools was not an easy one to achieve.  From the onset, starting in 2010, the education sector faced two main infrastructure challenges:

a) a technical one: how to design and build cost-efficient schools that are both hurricane and earthquake resistant.

b) an operational one: how to identify a strategy that permits to up-scale construction countrywide while assuring quality and controlling costs.

After 10 years of implementation, the technical challenge has been progressively overcome with the development and adoption of a series of reference documents for a quality- and cost-efficient school construction, including prototypes, construction drawings, manuals, and guidelines; having these reference documents have allowed to accelerate and harmonize project implementation, to ensure quality, and to contain costs.

The operational challenge has been more difficult to solve and required the project team to constantly adapt the implementation strategy to address the weaknesses observed during the different phases of project execution. The solutions evolved within the context shift from a post-earthquake emergency to a more stable environment. As a result, several options were explored and tested during this 10-year period with regards to project delivery methods, design preparation, and procurement strategy.

This continuous search for improvement has produced many valuables lessons, that are worth documenting and sharing, as they are relevant to other contexts and most importantly future emergency situations that require large reconstruction of social infrastructure.

Despite the many challenges, to date 82 new schools were built, and the last 8 are just being completed, thus, representing a successful result of the last 10 years of hard work.

That the new building codes were successful, was demonstrated just this summer, when another 7.2 earthquake hit the southwest of Haiti causing death, large-scale destruction of housing and infrastructure.  A first assessment of the 15 schools financed by the IDB Program and located within the affected area (Grand’Anse, South, and Nippes regions) showed that 14 schools were unaffected and did not experience any damage; and only 1 school suffered minor damages (mainly cracks on non-structural walls) that can be easily repaired.

Those 14 schools were safe to open for the start of the school year in September 2021. While it is still a bit early to draw conclusions, it appears that the Program’s efforts to develop and implement new construction standards are beginning to bear fruit.

The fact that students were able to resume their schooling immediately after a major disaster and without interruption is likely one of the most significant and positive effects of the work done since 2010 on school infrastructure in Haiti.

[3] This is an estimation considering that many of these schools are functioning in double or triple shifts.

Christian is an architect with a large experience in post-disaster reconstruction projects in various countries such as Sri Lanka, Myanmar, Bangladesh, and Haiti. Since 2014, he works as a consultant for the IDB and the World Bank, mainly on social infrastructure related projects in Haiti. Member of the Swiss Humanitarian Aid, he is also regularly on mission for the Swiss Agency for Development and Cooperation SDC. Following the 2010 earthquake in Haiti, Christian has accompanied the Haitian authorities to elaborate and promote new standards and guidelines for disaster-resilient school infrastructure. Following the 2004 Tsunami in Sri Lanka, he has managed a cash for housing reconstruction program for more than 4000 families. Holding a master’s degree on Monumental Archeological Heritage, Christian has been involved in conservation projects of historical monuments in Cairo for the Aga-Khan Trust for Culture. He has also conducted various research on ancient Egyptian architecture and published several articles for the Swiss Institute of Archaeology in Egypt. Since 2016, Christian teaches Architecture and history of Architecture at the State University of Port-au-Prince.