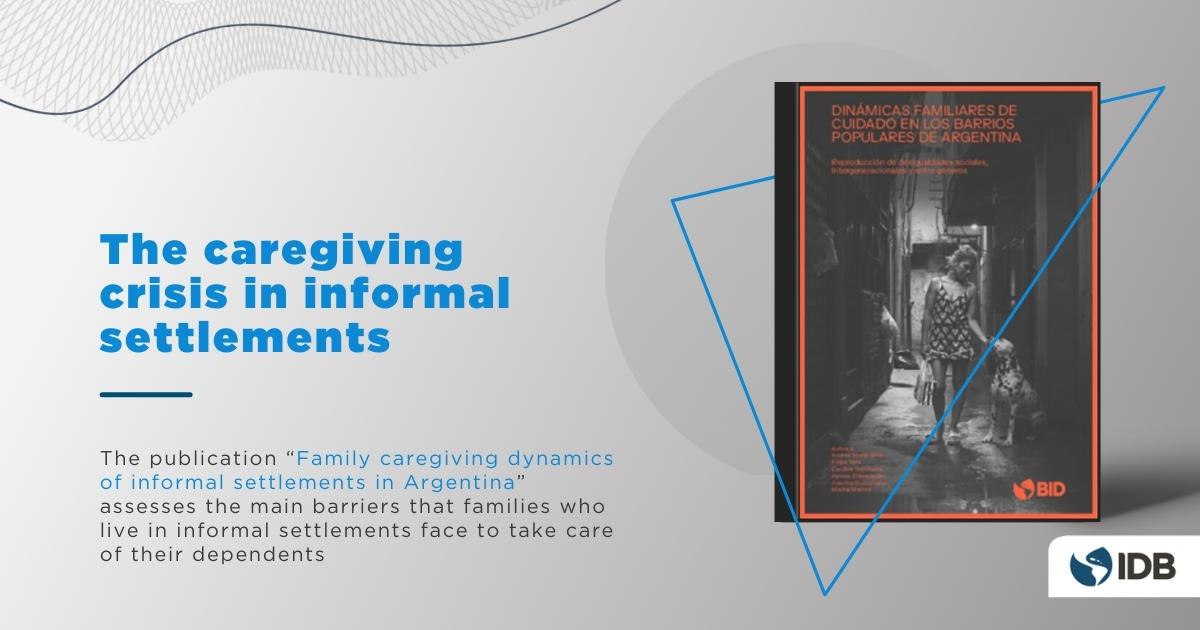 “I‘m a hairdresser (…) but I need to take care of my aunt [who has a severe disability], of my daughter [who’s only 12 years old] and the house” says Lorena, from Río Paraná, in Corrientes, Argentina. Just like many other women in the region, Lorena must balance her professional life with housework and caregiving responsibilities. These responsibilities are particularly challenging for those who live in informal settlements, also known as “working-class neighborhoods” (barrios populares). In Argentina, at least 4.5 million people reside in these types of settlements, and 2.5 million are dedicated to caregiving tasks.

The absence of basic services such as clean running water, electricity or access to a sewage system are some of the obstacles faced by communities from informal settlements. Additionally, half of this population does not own a property title. Also, more than 40% of the inhabitants are underage, which means that almost half of the households have caregiving responsibilities (almost two times the number of the ones in neighborhoods with adequate infrastructure).

The IDB study focuses on the 2.5 million people who live in these settlements and are responsible for, at least:

Caregiving has its costs. The resources families need to take care of others are: time, material goods, intermediate services (such as health, education, transport, among others) and an adequate environment. Through the study we found major differences in the rate of access to these resources when we compare families from formal and informal settlements, which makes the burden of caregiving a lot bigger and more expensive for the latter.

For example, in terms of access to resources, even though 88% of the families in barrios populares with caregiving responsibilities have at least one member with a paid job, for every hour these families dedicate to work, they earn 47% less than their pairs in neighborhoods with adequate infrastructure.

Furthermore, caregiving work demands a great volume of time and requires several tasks to be completed, such as cooking and cleaning. In general, personal, and institutional services – such as childcare facilities and respite centers for dependent elders – are key to free some of the time dedicated to caregiving and redirect it towards income-generating activities. However, given that for families located in informal settlements the access to financial resources is very restricted, assigning these tasks to an external institution is not usually an option. In fact, we have discovered that in barrios populares the proportion of families with small children who are enrolled in these spaces is less than 20%, compared to formal settlements, where enrollment reaches 37%.

On the other hand, the precariousness of housing and the access difficulties to basic essential services increases the time, goods, and services that families need to provide care. This is the case for 31% of the families with caregiving responsibilities that live in informal settlements, who affirm they have health issues related to the contamination of drinking water. In formal settlements, only 9% of the population faces this same problem.

In view of this context, generations grow in an unfavorable environment, where not only social inequalities prevail, but also gender inequalities.

For many households established in barrios populares, the only available resource to solve their caregiving dynamics is time.

This disbalance between the caregiving load impacts women and the youth in differentiated ways:

Based on the previous information, we can conclude that the difficulties to access basic services, financial resources and food, poor condition environments, and the absence of caregiving alternatives, are challenges that compromise the wellbeing and full development of the families that inhabit informal settlements.

What can we do to decrease gaps?

As a part of our Vision 2025,  the IDB is committed to closing gender gaps through our projects, and we understand that gender mainstreaming in sectors, such as urban development, are key to reach this goal.

If you enjoyed this blog, sign up here to receive our monthly newsletter with all the blogs, news, and events from the IDB’s Housing and Urban Development Division

Felipe Vera Sector Specialist from the Housing and Urban Development Division of the Inter-American Development Bank. He works in Chile and Argentina for programs to improve slums, urban revitalization of central areas, sustainable infrastructure, metropolitan governance and sustainable housing. Previously, he was an associate researcher and visiting professor at the Harvard Graduate School of Design and director of the UAI Research Center for Ecology, Landscape and Urban Planning in Chile. He is the author of the books' Kumbh Mela: Mapping The Efhemeral Mega City '(2014),' Andrea Branzi: Ten Recommendations for a New Athens Charter '(2015),' Rahul Mehrotra: Dissolving Thresholds' (2015) and 'Ephemeral Urbanism Cities in Constant Flux '(2016) "Housing: What's Coming?" (2018) "Building Metropolitan Governance: The Case of Chile" (2019), "Immigrating: Strengthening Destination Cities" (2020). He trained as an Architect and Urbanist at the University of Chile (2009) and has an MDeS in Urbanism, Landscape and Ecology from the Harvard Graduate School of Design (2013) and a Master in Real Estate Project Management from the University of Chile (2010). He has also received many Awards, including the Adolfo Ibáñez Award for Outstanding Research Achievements (2016), the Academic Committee Award at the Shenzhen Biennale of Architecture and Urbanism (2015), various research grants, Fulbright, Chile Scholarships, ITEC Fellowship and the Mario Awards Record for the best student of undergraduate (2009) and Jaime Bendersky for the best designer (2009) at the University of Chile.