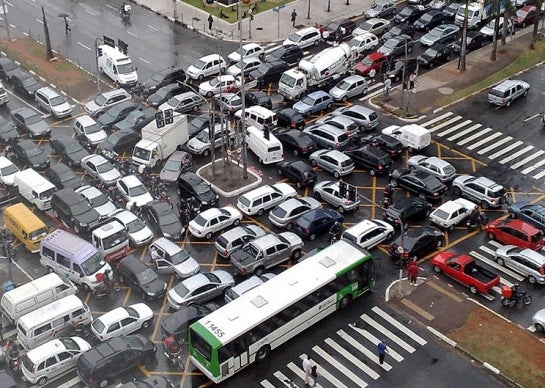 By the time you finish reading this sentence, a person will have been killed or injured in a road accident. According to the World Health Organization, an estimated 1.24 million people die in traffic crashes globally, mostly pedestrians, and that number increases on an annual basis. Between 20 to 50 million more people suffer non-fatal injuries, with many incurring a disability as a result of their injury. In the United States alone, traffic accidents account for an annual rate of 33,000 deaths, double the annual deaths due to murder.

Despite most of its countries having less road miles than say, India or China, Latin America ranks number one globally with the highest number of deaths from traffic accidents. In March of 2010, the region’s leaders joined the UN General Assembly in a resolution proclaiming 2011-2020 the decade of action for road safety. However, research has shown that the Latin America’s road safety record continues being the worst in the world, with over 130,000 fatalities and an additional 6 million people seriously injured every year in traffic related accidents.

When discussing the most pressing challenges in Latin America today, crime and violence are certainly considered by many as the main priority. Despite recurring shocking news headlines of violence in the region, traffic accidents kill more people in Latin America than violent crimes. The average number of homicides in Latin America (20 per 100,000) is lower than the average number of people killed in car accidents each year. To outsiders that are concerned in traveling to the region due to its high levels of violence, and to locals living in constant fear of being a victim of a crime, this may come as a surprise.

Various studies claim that human error is the main reason for over 90 percent of accidents on roads. However, drivers and other commuters that share the streets cannot bear all the responsibility for traffic crashes, especially when traffic designs are flawed.

How can we design safer cities?

Our growing cities need knowledgeable road engineers, urban planners and transportation specialists who are equipped to design safe environments that reduce the inherent risks in urban mobility. A good start to addressing this challenge is a new publication by the World Resources Institute (WRI), Cities Safer by Design, “a global reference guide to help cities save lives from traffic fatalities through improved street design and smart urban development”.

This toolkit was recently launched during a panel session that included experts from the WRI Ross Center for Sustainable Cities, Brookings Institution, the World Bank, and the IDB’s Emerging and Sustainable Cities Initiative (ESCI). Panelists explored how cities can implement and scale up safer designs that result in better quality of life for all users of urban transportation. The presenters and the audience discussed the various components needed to make a city’s design safer, including the creation of more compact, connected cities, which decrease the need to drive, and simultaneously prioritize bicycling and walking. WRI’s Ben Welle noted, for example, that a dense, walkable city like Tokyo has traffic fatality rates of 1.3 per 100,000, while a sprawled out city like Atlanta has a fatality rate of 9.7 per 100,000.

Large Latin American cities have already begun to implement these types of advanced safety designs into their urban traffic plans. Mexico City rebuilt its Avenida Eduardo Molina as a “complete street”, featuring exclusive transit, bike lanes and a central median for pedestrians. Bogota reduced cyclists’ deaths by over 45 percent between 2003 and 2013, by adding more than 100km (62miles) of dedicated bikeways while doubling the use of bicycles in daily trips. Costa Rica, a country where pedestrian deaths are the third most common cause of fatalities on roads, has carried out awareness campaigns to attempt to curb these incidents, such as the yellow hearts that designate where a pedestrian was run over by a vehicle, a sight much too common throughout San Jose.

Intermediate cities in the region, growing at increasingly faster rates, need to provide more than just transportation. Public transit is no longer about innovative ways to transport large amounts of people at faster speeds, but requires creating better access to the different mobility options while designing more efficient safety measures. As ESCI’s Ellis J. Juan explained, emerging cities in Latin America need to transition away from the idealization of vehicle ownership, due to the fact that some 90 million cars are expected to be on the roads by 2025, and users will not be able to share such congested and dangerous roads.

Unsafe roads do not only account for tragic loss of life, but they come with high social and economic costs as well. IDB studies have found that the region loses as much as 2 percent of Gross Domestic Product a year due to road crashes. Additionally, the high dependency of vehicles is also associated to a broad range of health concerns including obesity, diabetes and heart disease. AS WRI’s Claudia Adriazola highlights: “an environment that is friendly to walking, biking and public transport will improve air quality, and encourage physical activity and economic development by encouraging more street-level commercial activities. Better design can create safer, healthier, more vibrant cities”.

We know that safer cities make for more modern, competitive cities. Yet to create safer cities we must redesign our roads and methods of transportation, so that even the worst of drivers can make it home safely.

Could driverless cars revolutionize the way we move around in cities and reduce the number of traffic accidents worldwide?