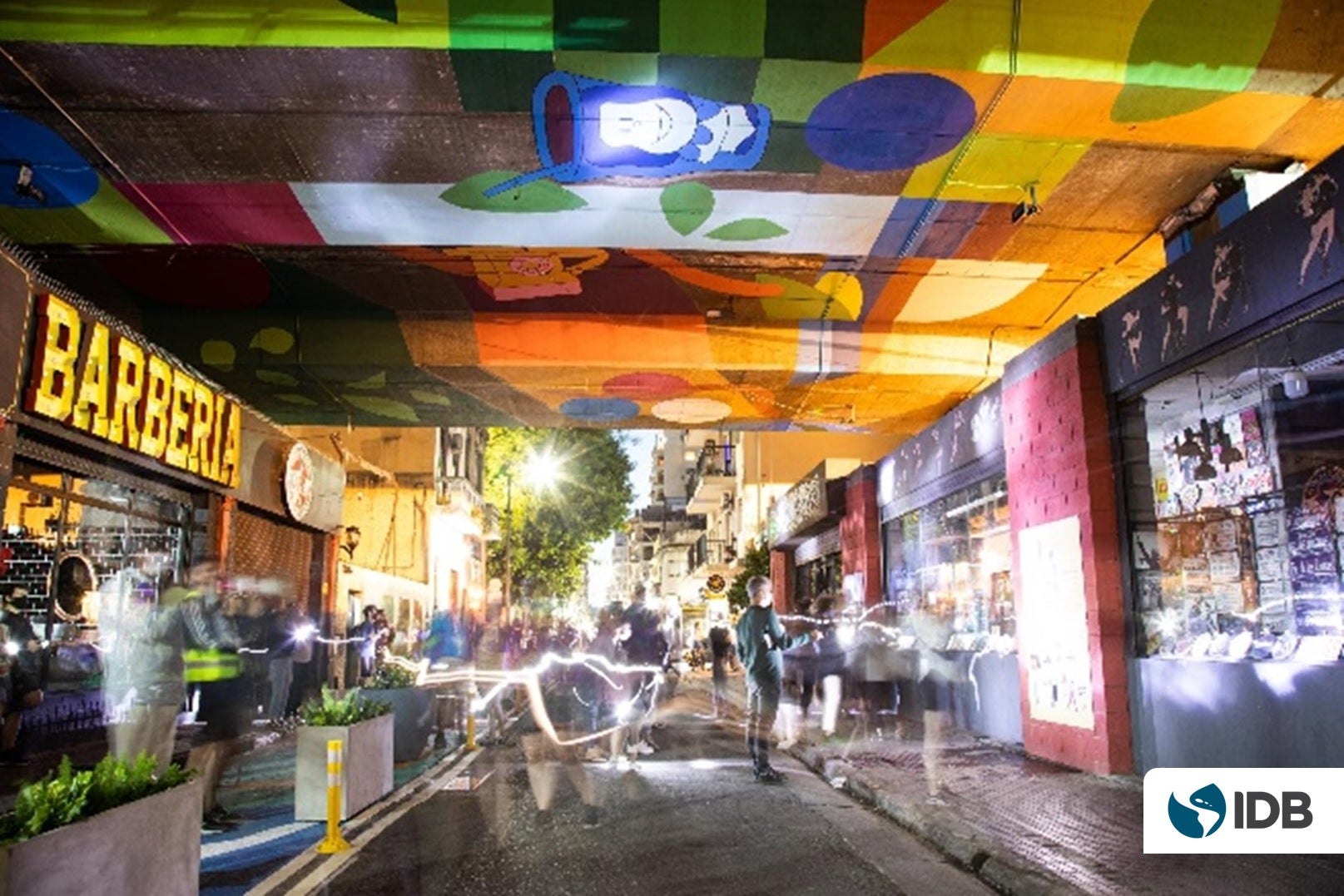 How would you describe the space located under an elevated highway? What feelings or perceptions come to your mind?

You probably associate this type of urban space with words like “darkness”, “insecurity” or “dirt”. It is also possible that it does not generate any sense of identity or belonging, and you do not feel like sitting down to talk with your friends or play with your child. Perhaps, the space under a highway coincides very well with what Marc Augé defined as a “no-place”; that is, a space that lacks symbolism or identity for people, where the social relationships or affective ties that characterize a community do not develop. Like the undersides of highways, cities are full of “no-places.”

In this blog we will address how, in the historic San Telmo neighborhood in Buenos Aires, Argentina, the Enlace Defensa project managed to turn an underside of a highways into a living space that captures the identity of the neighborhood and invites its permanence.

How to humanize a space that is unfriendly for socialization?

In the 1970s, the “25 de Mayo highway” was built in Buenos Aires. This infrastructure divided the San Telmo neighborhood into two parts, disconnecting two such iconic places as Plaza Dorrego and Parque Lezama, as well as other elements of historical and patrimonial importance in the neighborhood.

Image 1: Situation of the space under the 25 de Mayo highway bridge prior to the Enlace Defensa project

To revitalize the space under the San Telmo neighborhood highway bridge, the IDB Cities Laboratory launched a competition in 2019. The proposal presented by the Faculty of Architecture, Urbanism and Design from the National University of Córdoba obtained the first prize.

The IDB, within the framework of the Programa Patrimonio Vivo, launched the Enlace Defense project. This project was based on the proposal of the winning project of the contest. The objective of this project was to “link” both parts of the neighborhood, improving the experience of the people who circulate on Defensa Street in the lower sector of the highway. This temporary intervention was carried out through tactical urban planning and had the participation of residents and owners of businesses in the sector. In fact, the community played a leading role throughout the process.

Stages of the Project:

The process to carry out the project was developed in a participatory manner, involving the community in all stages, which were:

1. Understanding and empathizing with the community and the territory

3. Co-devising solutions to the challenges encountered

4. Prototyping and materializing the intervention

5. Testing whether the intervention positively modifies the defined urban variables.

Due to the COVID-19 pandemic, stages 1, 2 and 3 took place virtually. Surprisingly, the transition to virtual mode favored participation, increasing the number of residents who attended the workshops. Similarly, thanks to the dynamism of digital tools, which allow you to visualize results almost immediately, it was possible to maintain people’s motivation throughout the entire process.

Stage 4, which corresponds to the moment of implementation, was a real party in which the neighbors took over the public space and gathered to appreciate the result of months of co-creation work. The identity elements in the floor and ceiling murals, the micro-stories of the “Universes of San Telmo” written by the residents themselves, the new furniture in public space gained from the vehicle, artistic interventions and games for children, allowed people to enjoy themselves. feel comfortable in what a few months ago was an unfriendly space.

The actors that participated in this process were: residents, the merchants’ association, representatives of social entities, the neighborhood hospitality sector, different entities of the Government of the City of Buenos Aires, the IDB Cities Lab, and the Urbanismo Vivo.

Image 3 4 and 5: Situation of the area after the implementation of the Defense Link Project

How has this project impacted on the lives of neighbors and users?

After the implementation of the project, it was time to check whether the intervention had met its objectives (phase 5). Qualitative and quantitative indicators were used to collect information. The indicators were the following:

The data showed an improvement in the positive evaluation of the environment, going from 36% to 70%.

Pedestrian traffic on a Sunday showed an increase of 23% in the mornings and 37% in the afternoon.

Regarding vehicle flow, there was no decrease in quantity, but there was a speed reduction of 39%.

The data and observations also reflect improvements in the perception of cleanliness and hygiene, identity attributes of the neighborhood, increased residence time, and appropriation of neighbors to care for the installed pots.

In addition to the urban benefits and the improvement of the perception of the people, the appearance of COVID-19 during the development of the pilot project, allowed to discover that there are other ways of interacting and collaborating between local government, civil society and citizens to transform urban environments and turning non-places into living and attractive spaces.

Likewise, this project was a test of resilience for all the actors involved. This is because it has combined different success factors for a project with these characteristics, such as: