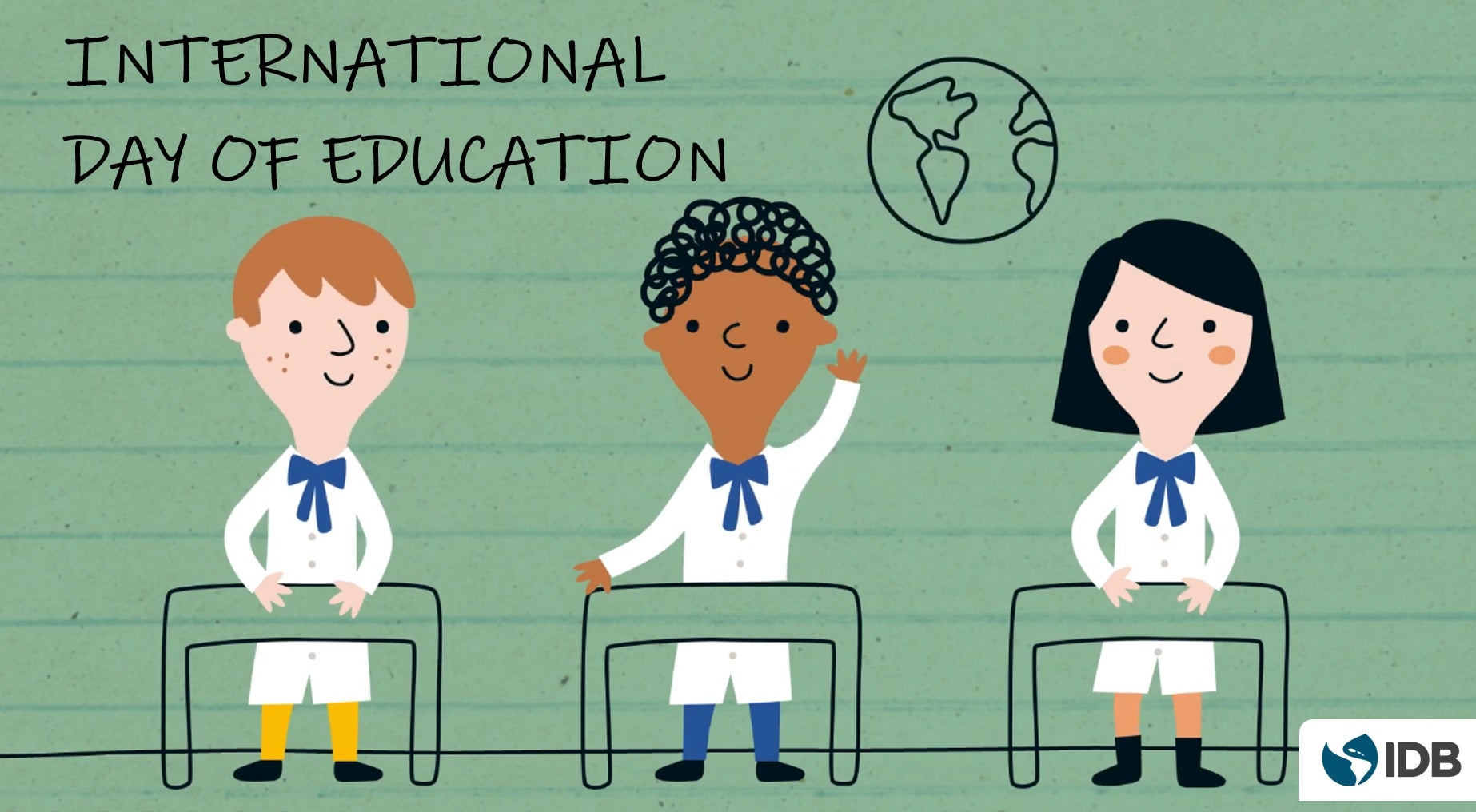 Every January 24 we commemorate the International Day of Education. This celebration offers us an excellent opportunity to highlight the importance of quality education for countries to break the cycle of poverty that leaves behind millions of children, youth, and adults.

For this reason, today’s blog will be dedicated to present a recent study that has found evidence of the positive impact that neighborhood improvement programs financed by the IDB has in favoring the school attendance. Would you like to learn more about it?

The rapid growth of cities in Latin America and the Caribbean (LAC) has caused many neighborhoods to grow out of control, giving way to what are known as informal neighborhoods, villas, settlements, favela camps depending on the country where we are. According to data from the World Bank, in 2018 almost 21% of the urban population in the region lived in informal settlements.

These neighborhoods are characterized by the low quality of the materials in their houses, overcrowded conditions, lack of services such as water or sanitation, or security of tenure. Their inhabitants are also at a socioeconomic disadvantage: they are poorer and less educated than residents of the formal city, and they are also more likely to be discriminated. Combined, these elements of precariousness lead slum households to fall into intergenerational poverty traps.

Education is a key instrument to promote the upward social mobility of people. The more training, the more chances of getting a better paid job. Therefore, education and training are the best alternative to prosper and get a quality job. However, students belonging to vulnerable populations living in marginal neighborhoods have high rates of absenteeism and school dropout. These two factors threaten their chances of breaking the vicious cycle of poverty, condemning them to low-quality jobs that do not require formal education.

In order to integrate slums into the social and urban creation of formal city areas, over the last five decades, LAC governments have carried out slum upgrading programs (PMB). The Inter-American Development Bank (IDB) has been very present during this time helping countries to achieve this goal. Without going any further, between 1992 and 2005, the IDB invested more than 5,000 million dollars a year in PMB throughout the region.

Although it is true that the most notable investments of the PMBs focus on providing basic infrastructure to these neighborhoods (water, sanitation, electricity, roads, etc.), these are usually accompanied by actions to increase social capital (social accompaniment during the presence of the program, training courses, employment, financing of community initiative projects, among others). The objective is to achieve not only the urban integration of these areas, but also the social integration of their inhabitants. In addition, these investments are complemented by the provision of some degree of security of housing tenure and support for the formalization of property titles.

The evaluations carried out to determine the direct impacts of PMBs (which measure the impact of some of their partial components such as water supply) show that PMBs are effective in reducing the incidence of malnutrition and water-borne diseases, increasing hours of work and employment, as well as the quality of life in general.

At the IDB, we have gone a step further and set out to find out whether the PMBs have an impact on something as important as the school attendance of children in these neighborhoods. Given that the existing empirical evidence of comprehensive interventions in this regard was scarce or inconclusive, the IDB’s Housing and Urban Development Division, in collaboration with the IDB Education Division, conducted a quasi-experimental study (you can access it free of charge here) with administrative data to answer the following question: Do neighborhood upgrading programs improve children’s school attendance? The answer is yes.

In the study, we take Uruguay as a reference to evaluate the impact of the PMB on the daily attendance of primary school children. Why Uruguay? Despite its wealth (Uruguay is the second highest income country in LAC), the country, like the entire region, has irregular settlements. Indeed, in 2018, Uruguay had 607 marginal neighborhoods that encompassed 165,000 inhabitants in 50,000 households.

According to the results of the study, neighborhood improvement programs increase children’s attendance at primary school by 30%. This is very important, because not attending school in primary school is the first determinant of educational disengagement in secondary school, preventing the accumulation of human capital and perpetuating the cycle of poverty of these families.

Regarding the way in which the program improves school attendance, this seems to be related to improvements in infrastructure, but also to the improvement of families’ expectations about their future and that of their children. This evidence is key in the discussion of public policies in both education and urban planning since the long-term effects on human capital broaden the discussion of policies on the long-term economic and social profitability of PMBs.

Do you want to know more about the results of the study? Don’t miss the next video, and of course: Don’t hesitate to download the publication here!

Finally, we are happy to announce that the IDB has developed a study in Uruguay that tries to promote attendance by providing information to parents about the importance of education in the preschool cycle. A publication will be available shortly in the IDB library with all the details.

Paloma Acevedo is an economist, Specialist in Evaluation and Urban Development in the Argentina office of the Inter-American Development Bank where she works on projects to improve vulnerable neighborhoods. He has a doctorate in Economics with a specialization in Public Policy Evaluation from the Complutense University of Madrid and a Master's degree in quantitative economics from the Center for Monetary and Financial Studies (CEMFI). Before working at the IDB, he was a Monitoring and Evaluation Specialist at the World Bank working in the Office of the Chief Economist of the Human Development Sector and in the Research Department. Throughout these years, he has supported a multitude of project teams in the development of impact assessments to inform the public policies of governments around the world, some of which have been published in prestigious journals.

Wladimir Zanoni is a Senior Country Economist for Ecuador at IDB. Before joining the Bank in 2018, Zanoni worked at Chapin Hall Center for Children at the University of Chicago on the design, evaluation, and implementation of public policies in the USA in the education, early childhood, health, and social protection sectors. Zanoni has been a Fellow at the Harris School of Public Policy at the University of Chicago (where he obtained an MPP and a PhD in public policy) and has taught in the Economics and Public Policy departments in Carleton and McGill Universities in Canada

Marcelo Pérez Alfaro is a Lead Education Specialist at the Inter-American Development Bank (IDB). He joined the Bank in 2003 and worked in the Country Offices of Suriname, Ecuador, Brazil and Uruguay, in addition to developing projects and policy dialogue in Chile, Argentina and the Dominican Republic. He has extensive experience in leadership and management of the strategic and budget planning of large social programs and agencies, such as the National Social Security Administration and the National Institute of Social Services for Retirees and Pensioners of Argentina. Marcelo has a Master's degree in Public Administration from the Kennedy School of Government at Harvard University, a Postgraduate degree in Economics from the Di Tella Institute, and a Bachelor's degree in Economics from the Universidad Católica Argentina.