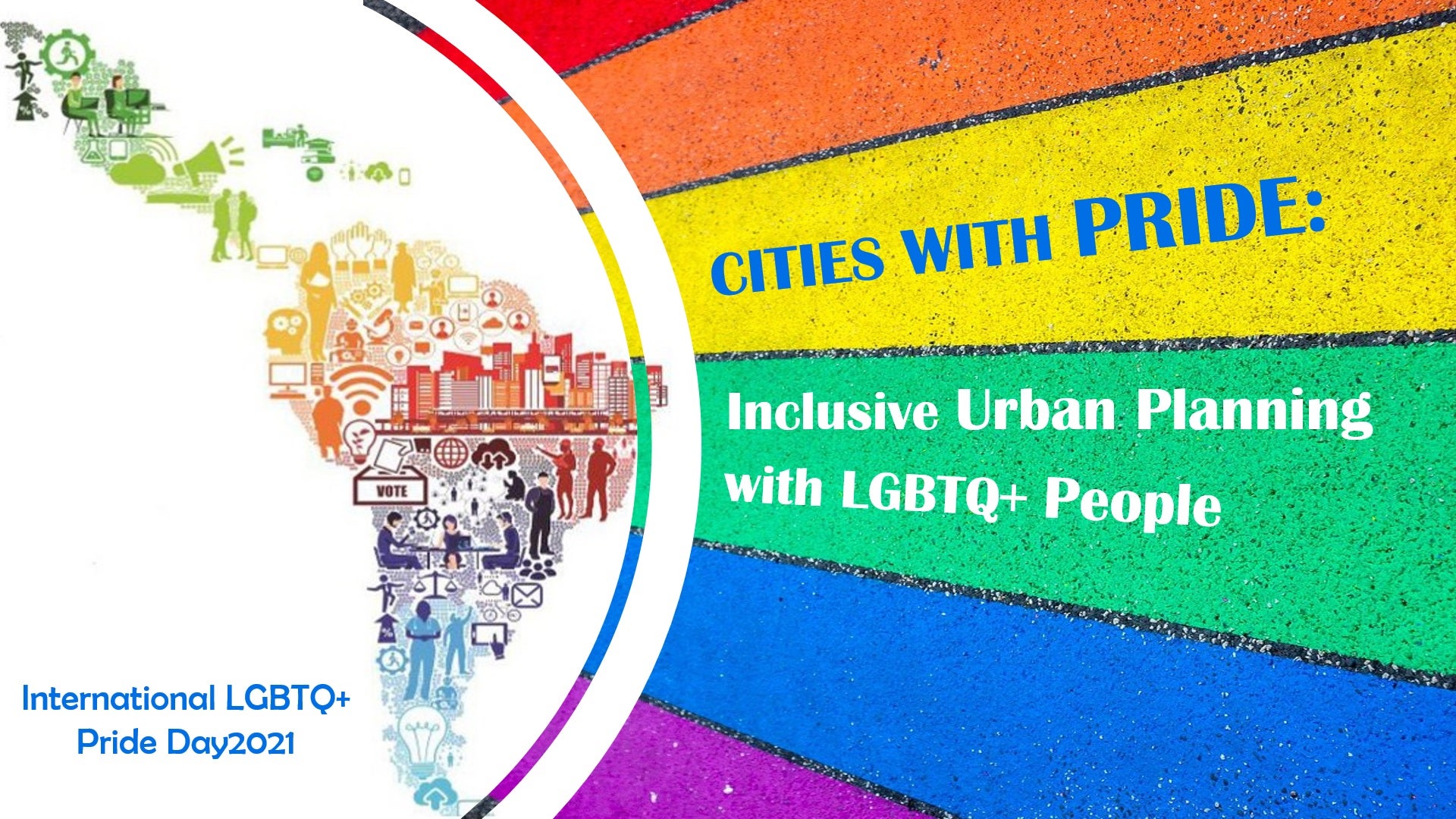 To commemorate today´s International LGBTQ+ Pride Day, in this blog we will address why inclusion, respect, and education are key elements to build cities but also, a more inclusive society in Latin America and the Caribbean (LAC).

Discrimination against the LGBTQ+ people in accessing public space

Urban spaces reflect social relations, but also, they can reproduce systems of domination. For this reason, they can be constructed according to patriarchal, binary and / or heteronormative logics. Heteronormativity considers heterosexuality as a norm and excluding all other sexual orientations. Like gender, gender is not always binary it can show in different phases throughout a person’s life.

As society and academia have often been limited to addressing this binarity, the needs of lesbians, gays, bisexuals, trans and non-binary people today are not sufficiently taken into account in the city’s public policies. LGBTQ+ people are often very invisible and are subject to a lot of violence, both in public and private spaces, and in many cases their right to enjoy urban space is not respected. The annual report of LGBTQ+ deaths in the region highlights the special vulnerability of this group.

From 2014 to 2020, a total of 1,292 people belonging to the LGBTQ+ collective were murdered in LAC because of their sexual orientation. This means that 20 people with a diverse sexual orientation, gender or identity were murdered every month. This shows that public policies, including urban ones, still do not take into consideration LGBTQ+ people needs and also, they do not protect LGBTQ+ people enough in our region. For this, it is important to create spaces for conversation and exchange to incorporate these specific needs in urban interventions.

A first step towards achieving this goal is to learn, for example, about the challenges and struggles of the trans community in the region. To do this, we will ¨travel¨ to Brazil, because this country offers us with some promising practices that can be replicated in any other country in the region.

An interesting initiative in Brazil is the Draft Law on Public Access Bathrooms for trans people and transvestites. This initiative aims to advance towards the solution of the symbolic and physical violence represented by gender toilets (explicitly identifying that there is one bathroom for women and another for men only)

The statement of the Brazilian Congresswoman, Renata Souza, about the Bill helps to understand the issue: “Many people who are not transgender (cisgender people, or simply” cis people “) do not imagine the suffering of spending hours without being able to go to the bathing, suppressing the desire to satisfy physiological needs for fear of disapproving looks, bad jokes, harassment and even physical aggression. “ When designing a public space or equipment with a bathroom, it is important to take these aspects into account.

Another powerful tool to empower the voice of the LGBTQ + community in their right to the city, among other things, are the LGBT Citizenship Centers. They are public facilities where legal, social and psychological services are offered to lesbian, gay, bisexual and transgender people, in addition to acting as a spur by promoting public policies to combat homophobia, transphobia and promote LGBT citizenship. They function as articulators of a network for the protection and guarantee of rights for the LGBT population, minimizing the vulnerabilities to which this people is subjected, for example providing legal, psychological counsel to families and victims. Rio de Janeiro, Natal, Brasilia, Recife and São Paulo are among the many cities that opened their LGBT Citizenship Centers.

CHEGA DE FIU FIU is a social mobilization campaign started by the Think Olga NGO to map, raise awareness and fight against harassment in public spaces. The campaign began in 2013 and aims to increase women’s safety and their right to walk freely in public spaces without being harassed, attacked, or discriminated. This includes LBTQ+ women. The impact of the campaign led to the production of a documentary also titled Chega de Fiu Fiu, which has already had a great impact on its free and accessible distribution in Brazil and other countries around the world.

Going back to basics: what is intersectionality? What does LGBTQ + mean?

Intersectionality is a term used to refer to the ways in which different social aspects – gender, race, class, sexuality, age, among others – interact with each other, influencing the way we live life in society and in the city. The concept was popularized by black feminists, responding to the predominantly white and bourgeois Western feminist movement, and, particularly, by Kimberle Crenshaw, American feminist and academic in areas such as race or gender.

This approach allows us to broaden our view of the various forms of discrimination that can be experienced, particularly in public spaces, for reasons of race, ethnicity, class, religion, nationality, sexuality, physical and cognitive capacity, age and gender. Discrimination occurs even more with working-class black women or trans women. Ultimately, individuals have complex identities that cannot be understood on a single plane (being a woman or being a man, for example). This requires an analysis from various perspectives and at different levels to understand how individuals position themselves in the city and in society in general.

The letters LGBTQ+ stand for:

– Bisexuals: men and women who feel emotional / sexual attraction to the male and female gender. People who are emotionally / sexually attracted to all genders identify as pansexual.

– Transsexuals or transgender: people who identify with another gender, different from the one assigned at birth, even within the non-binary spectrum. It is a concept related to gender identity and not to sexual / affective orientation.

– Queer: people who identify themselves as a queer gender transition between female and male genders, or in other gender (s) in which binarism is not applied. The term refers to queer theory, which states that sexual orientation and gender identity are the result of a social construction and not a biological functionality.

– +: includes all the different possibilities of sexual orientation and / or gender identity that exist.

Why question gender in public space and in the city?

Simply because these are places that promote meeting, visibility, and exchange between people in society, and where gender is demonstrated. Public space is often defined as a “neutral” space when it is not. Public space is not public to everyone either, as its name suggests. To understand the power relations in the design, use, and occupation of public space that perpetuate social representations of gender and drive change, the IDB has created a Practical and Intersectional Guide for More Inclusive Cities (available in Portuguese).

The guide aims to open a space for reflection on feminist and intersectional perspectives in the design and management of cities in Brazil. It addresses urban planning through the integration of different characteristics of city users such as gender, race, sexual orientation, age, and physical condition: are the characteristics of urban spaces designed in an equitable way according to the needs of each user, including children, the elderly, people with disabilities, LGBTQ+ people, people of different ethnicities and races? How can this diversity of users be better integrated in the city to make it accessible, safe, and inclusive?

Additionally, we invite Portuguese speakers to listen this IDB podcast “Diversity and the Right to the City” with Marina Reidel, LGBT Director of the Brazilian Ministry of Women, Family and Human Rights, which informs us about the ways in which daily violates the right to enjoy the city of LGBTQ+ people, and how the voice of LGBTQ+ people should be taken in urban planning.

We would like to know initiatives of this type that are being carried out in your municipality or country. We encourage you to share them in the comments section!

Sarah Gamrani is a French urban specialist, Master in Urban Strategies and Metropolitan Governance. Throughout her academic career, she has integrated her feminist readings into her work, and was co-founder, in 2019, of the feminist collective 'urban femina' created to question gender approaches in the academic world, but also in the practice of urbanism. . The notions of care, intersectionality and inclusion of women in urban spaces are central themes of her research.

Marina Reidel is teacher of Education and current LGBT Director of the Ministry of Women, Family and Human Rights in Brazil. Marina is a transsexual woman that during her career worked as a public school teacher and LGBT manager in Rio Grande do Sul. She was the first woman transsexual to complete a Master's Degree in Education at the Federal University - UFRGS.