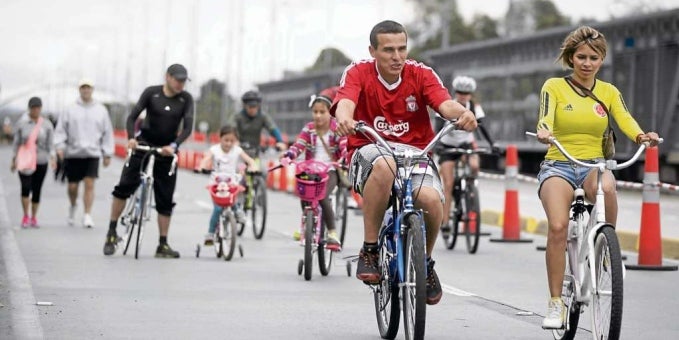 On workdays, when the traffic is so clogged that cars get stuck in the intersection for multiple light changes, you probably wish you’d taken your bike. However, riding a bike can be a daunting challenge in a city with limited bike lanes. Plus, who wants to bike uphill to the office on a hot day?

Those kinds of scenarios are exacerbated in Latin America and the Caribbean, where urban commute times average two hours each way (the equivalent of one work month a year), many urban metropolises sit on mountainous terrain, bike lanes are scarce and hundreds of thousands of new cars join the roads each year.

The IDB is working to improve the region’s travel by enhancing road infrastructure, expanding mass transportation, and encouraging cities and municipalities to incorporate bike lanes into their infrastructure plans. It is also looking into the latest innovations in cycling by attending events like the World Bike Forum that took place in Medellin. This year’s forum showcased numerous solutions for these problems, such as two bike innovations that caught our attention: mobile BikeShieldApp that alerts drivers to the presence of a bicycle; and the Copenhagen Wheel, a low-cost, light-weight motorized wheel that temporarily transforms any regular bike into a hybrid electric with a smart phone app.

Assaf Biderman, co-founder of the Copenhagen Wheel, spends most of his time finding solutions and new models of transportation for cities. “Beyond the environment, beyond cleanliness of air, beyond economic impact, people are beginning to suffer from spending hours in a box, and we’re seeing this in the numbers,” he said. According to Biderman, all over the world millennials are delaying the once-coveted driver’s license, and Japanese people under the age of 35 are less likely to buy cars than previous generations.

At about $1,000 per bike, the Copenhagen Wheel could be as much as one third the price of an average electric bike, and its simple design makes it easy to handle. The battery-operated motor fits inside the wheel, and an app lets riders pre-program their ride with modes like “eco” and “turbo” to adjust for varying geographies. “No throttles, no buttons, no external wires,” Biderman noted.

Imagine that you’re turbo-cycling up that final hill, the wind gently kissing your face as you breeze by lines of rush-hour car drivers, and one anxious rubbernecker sees an opening in the next lane and tries to pull out in a flash. That’s where drivers and bikers might both benefit from the new smart phone-operated BikeShieldApp. It sounds an acoustic bike bell tone alerting drivers to your proximity even in a blind spot.

“It takes a lot of pressure off of drivers whose visibility may only be 65 out of 360 degrees,” explained BikeShieldApp inventor Pere Margalef, a Spanish biker who has a spent a decade weaving through Los Angeles’ notorious traffic congestion. The UC Irvine graduate’s self-titled app rings its acoustic bell on the smart phones of 4,000 California drivers, and it’s soon to reach about 20,000 more phones in Mexico’s bustling Guadalajara through an agreement with the Instituto de Movilidad y Transporte del Estado de Jalisco (Mobility and Transport Institute of Jalisco State in Mexico).

“I think it can improve the coexistence on the street and help non-bikers understand that we all have to share the road and that it doesn’t cost them anything more than the time to download the application,” Margalef said.

Okay, so you can improve your ride with a turbo-mode motor or weave through traffic easier, but how much is this really going to improve the environment and cut commutes for the masses?

“I think we’re part of the infrastructure or at least we can become part of it, even in the future when the application is more developed and we have the resources for our own company. That same company will invest in infrastructure because we can’t completely substitute one thing with another,” Margalef concluded.

Click here to listen to the entire interview with Assaf Biderman.

Diana Braier is a Communications Senior Associate in the IDB’s Office of External Relations.

Julienne Gage is a multimedia communications specialist in the IDB’s Office of External Relations. She has worked as a reporter and producer in North and South America, Africa and Europe, and frequently investigates ideas for sustainable cities.