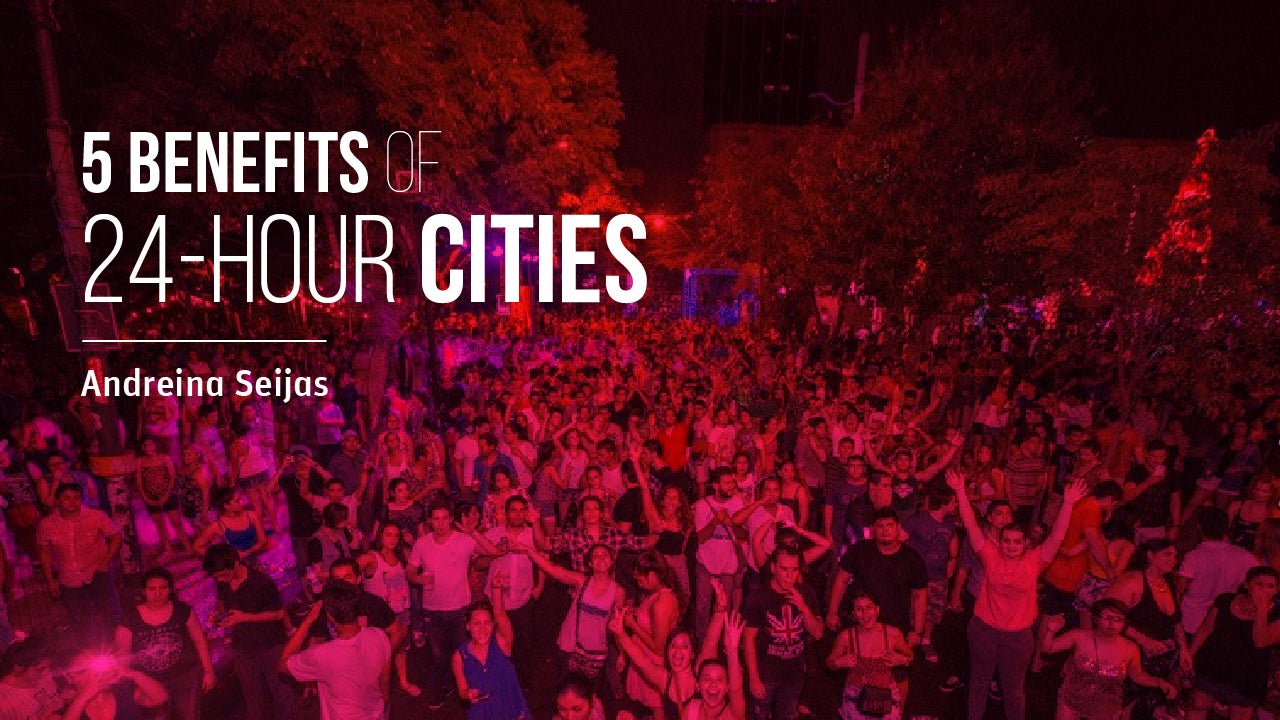 When we think about the night, the first things that come to mind are bars, restaurants, noise, alcohol, partying. However, the notion of the night has a much broader meaning.

For many years, cities like London and Melbourne have studied human behavior during the night in order to design policies that help regulate this time-frame and improve quality of life in these spaces, not only for entertainment, but also for those who work during the night. Examples of these policies include public lighting, hours of operation of shops and services, and the labor conditions of those who work at night.

It caught my attention that in Latin America there is almost no literature about this subject. I have also noticed that there is a negative perception of the night in the city, perhaps because it is mainly associated to issues such as noise (40% of citizens surveyed by ESCI complain about high noise levels in their city) and insecurity (only 18% report that they feel safe walking around their city at night).

That is why my goal is to find positive night-time experiences in Latin America, in order to pave the way for our cities to become increasingly 24 hours.

Why should our cities promote a greater night-time economy?

From the experience of cities like London, we can identify a series of advantages or reasons why our cities should promote a greater night-time economy:

1. More jobs: The night-time economy is a source of new jobs and new income for the city.

2. Revitalization of public space: It allows the revitalization of areas and buildings in the city, particularly those that are not used after a certain hour of the day.

3. Safety: 24-hour cities promote citizen security. Why? Because–at least perceptually–a street that is filled with people feels much safer than an empty street. For this reason, policies that invite people to stay outside, such as expanding the hours of operation of shops, restaurants and movie theaters, help maintain lively streets.

What night-time policies and experiences exist in Latin America and the Caribbean?

More and more cities in the region are finally understanding the importance of night spaces and designing their own policies.

There is no doubt that the first city to design night spaces in Latin America was Buenos Aires. For more than a decade, the city has organized La Noche de los Museos (The Night of the Museums), an event that brings together thousands of people every year–and a million people in 2014–to celebrate the city’s art and culture.

From a social and cultural perspective, there’s also Por el Medio de la Calle (In the Middle of the Street), a festival that since 2006 has gathered thousands of people in the streets of Caracas to celebrate the city’s night-spaces during one night a year.

A more recent experience is that of Asuncion‘s historic center. The municipality is currently trying to revitalize this important area of the city, in order to create more meeting spaces for its citizens. With this goal in mind, a group of retailers and entrepreneurs who work in the area came together a few months ago to create the Association for the Night-Time Movement of Asuncion’s Historic Center, with the objective of revitalizing and stimulating the area with cultural activities, gastronomy and the creation of meeting spaces for the youth and for people of all ages during the night.

All these activities are positive examples that illustrate why Latin American cities can become more 24 hours. However, it is important to clarify that, in order for these experiences to become good practices, there has to be a balance between their economic and their social benefits, and they have to invite citizens to reflect on how they use public spaces in their city, during the day as well as during the night.