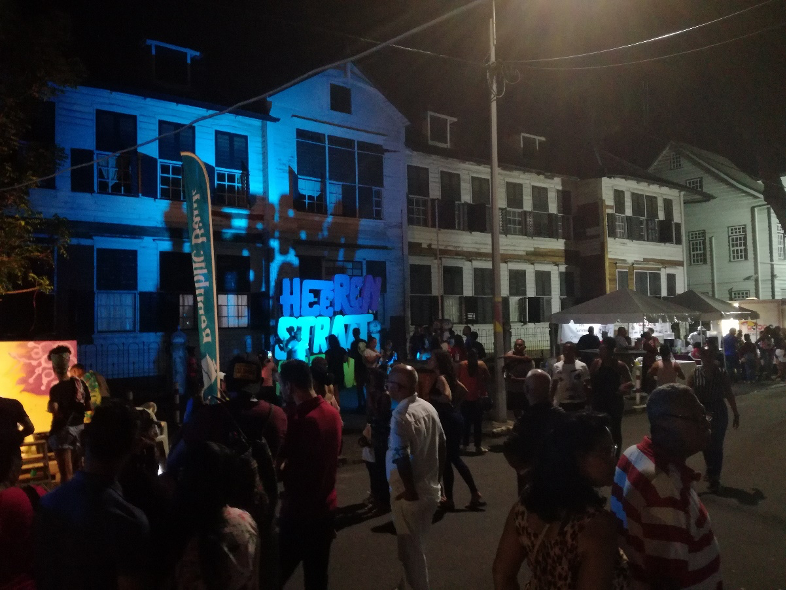 Heerenstraat Festival is a place of encounter to celebrate the living heritage of Paramaribo’s city center. The first edition of the Festival took place between September 30th and October 6th 2019 on the streets of Paramaribo’s city center, a World Heritage Site (WHS). The IDB in coordination with the Ministry of Education and Culture of Suriname partnered with The Back Lot foundation (TBL) to organize the film, gastronomy and arts festival. Today, it is unthinkable having crowds of people coming together on the streets. However, outdoor spaces like streets, plazas and parks are the safest spaces to physically distance while socially interacting with each other. Covid-19 presents the opportunity to convert the outdoor festival, which is more than just an annual event for entertainment, into a regular stream of people coming to the city center enjoying their living historic and cultural landscape and buying-local on a daily basis.

We can draw the following lessons from the Heerenstraat Festival, which was designed as a pilot project, that are important to consider for the future valuation and enjoyment of the historic city centers:

This urban experiment (considering the first edition of the festival and ongoing programs) is designed and reviewed to scale up and replicate place improvement schemes in Suriname and across the region. As you just read it is not just an event, but part of a collective urban activation process where we bring together the best of the local software (people, skills and traditions) and hardware (heritage buildings and streets).  With covid-19 the collective efforts are more important than ever, to reinvent business strategies, provide safe conditions for people, and build back a better tomorrow.

Look here at many other projects in urban revitalization to understand the diversity of urban challenges and solutions the Cities Lab is facing.

Ruth Lanting joined the Housing and Urban Development department of the IDB in 2019, where she works on urban revitalization, housing and climate adaptation projects. Prior to working for the IDB, Ruth worked as a project manager on rehabilitation and urban renewal projects for the social housing associations Ymere and Alliantie in Amsterdam. She also has experience as an urban designer on redevelopment and urban planning projects in The Netherlands, Germany and India. Ruth holds a Master’s in Architecture from Delft University of Technology and a Bachelor’s in Architecture, Urbanism & Building Sciences from the same university.