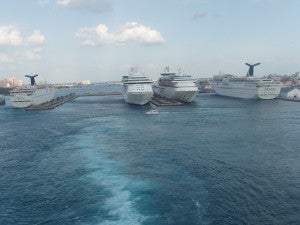 Lush sandy beaches, beautiful clear aqua-blue waters, sunshine, a beach towel and a martini.  For most, a dream vacation, especially for those that live in colder climates and landlocked areas. The Bahamas has been one of the luxury vacation hot-spots for decades.  It is known for attracting celebrities. The Bahamian tourism brochures are still exploiting the nostalgia, eternal pictures from the fifties and sixties with celebrities, such as Jackie O. walking through downtown Nassau wearing their big sunglasses.

The Bahamas’ main assets are its 315 annual days of sunshine and some of the most beautiful beaches.  Today, The Bahamas, with its population of 400,000, is attracting 1.4 million tourists annually.  It is a small, open, service-based economy that relies on tourism for approximately 53% of its GDP.

In spite of all of this, there is much regional competition, as well as the imminent opening of Cuba to US tourists, causing a need for The Bahamas to strategically prepare and come up with a plan to better sale its particular niche in the tourism sector.  Conde Nast Traveler, one of the important tourism magazines, ranked in 2014 the city of Nassau as among the 10 most un-friendliest cities in the world. The magazine states, “Though Nassau has wonderful beaches and great bars, readers emphasized that Nassau felt unsafe and depressing.”  This is definitely not good for an economy which gets more than 50% of its GDP from tourism.

There are other challenges as well that The Bahamas is facing, such as the deterioration of the social situation worsened by an increase in poverty and double digit unemployment (15.7% by the end of 2014). Other obstacles The Bahamas faces are the slow economic growth (of less than 0.7% in 2013 or 1.5% over the last 15 years) and a deteriorated fiscal situation, leading to an increased central government deficit which in return has caused a double downgrade of its credit rating in 2014.  And on top of all this, the country is experiencing a significant level of violent crimes, which may have a direct impact on tourism.

All the challenges that this small country and its government are dealing with, make it of utter importance to make the right decisions. Those decisions and costly investments need to be sustainable over time. Therefore, a long term national development plan is the way to go and its main priorities such as tourism would be planned with the opposition party and the civil society.

I am also determined to ensure that the National Development Plan process is inclusive and that it incorporates the inputs of our citizenry. Indeed we want this Plan to serve as a truly national Vision for The Bahamas so that our children and grandchildren will have a roadmap lay before them as to how our nation can and should evolve from one generation to the next…”

The Government of The Bahamas and the Inter-American Development Bank joined efforts implementing a TC aimed at strengthening the institutional capacity of the OPM by enhancing its long-term development planning and investment project assessment functions. An improved institutional capacity for planning and investment assessment would ensure a better economic performance and ultimately contribute to the sustainability of public finances. It would provide comprehensive overview of the economy, set policy direction for economic growth, and identify strategies, programs and projects to improve the overall health and sustainability of the economy.

In the 19th century Emile de Girardin came up with the saying “Gouverner, c’est prévoir” or in English “To govern, is to anticipate”. Change is inevitable if tourism is to continue to be The Bahamas’ number one lifeline. The Bahamas must plan and move forward to keep tourism not only alive but make it grow. It is possible.  All it takes is a plan and action.