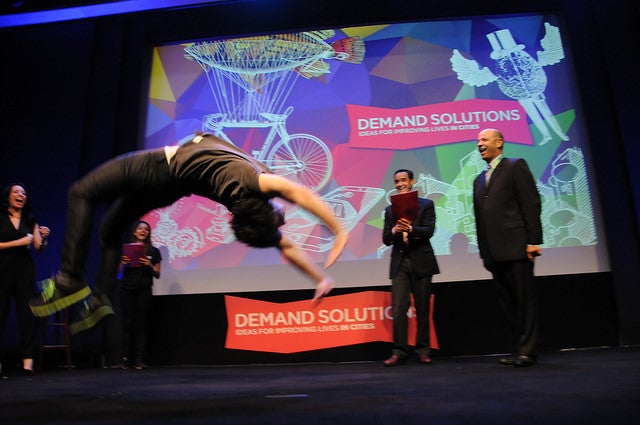 Washington, D.C., is usually a serious place.  In this city, an on-stage backflip is a rare occurrence. (Please note that I don’t mean rhetorical backflips, which are much more common.) So I was shocked when one of our guests flipped across the stage during the 2015 Demand Solutions, the IDB’s flagship event on innovation and creativity. More on that stunt shortly.

For anyone living in a city anywhere in the world, you’re probably used to the ubiquitous and necessary presence of traffic police —not always a welcome one. Montevideo is no exception. The often-uneasy relationship between drivers and the police there made @chanchosuy one of Uruguay’s most popular twitter accounts back in 2013. In effect, many @chanchosuy followers used the account to alert others about lurking traffic cops (or “chanchos”, as they are popularly known in Uruguay). A small controversy soon followed: were these alerts intended to undermine the enforcement of traffic rules? Or were they meant to uncover speed traps where officers were hiding instead of policing in high accident locations?

To Marcelo Wilkorwsky, the creator of @chanchosuy, that wasn’t a major concern. He had loftier ambitions. His success on Twitter moved quickly to something well beyond reporting the presence of police and even the monitoring of traffic. Commuters were connecting with each other to report what they were  observing on the streets, in an effort to help their fellow citizens. Soon, even the press began to use the information to report on the street as it occurred (first to know, first to report!). The initial brouhaha blew over.

Inspired by the success of @chanchosuy, Wilkorwsky, now with partner, Rafael Cavestany, launched Oincs, a mobile application aimed at encouraging citizen collaboration to alert followers on anything happening on the streets. Inevitably, comparisons with Waze, the world’s largest community-based traffic and navigation app, followed. Did users in Montevideo need another navigation app? Was this simply another spin-off of an existing platform that had already achieved global scale and success?

Wilkorwsky and his co-founders moved quickly to dispel such notions. If anything, they asserted, Oincs complements Waze. GPS navigation wasn’t part of Oincs intended functionality. The Uruguayan app’s main driver was more ambitious than providing navigation, they argued: it aspired to bring citizens together and to put them citizens in touch with local governments, especially city officials, in order to detect and solve problems.

They decided to prove the point, even as they were reaching their desired scale and sustainability (the Holy Grail of entrepreneurship). They knew that they had latched on to a key fact: in a world where governments are continually facing the challenge of reinventing themselves in order to deliver efficient and cost-effective services, gaining information and insight through communication technologies was becoming a must. And this is how they’re re-engineering Oincs: as a G2C (government to citizen) platform targeted at small to medium-sized cities.  They’re calling the platform “Collaborative Cities.”

With Collaborative Cities, Oincs now aspires to provide cities with a customizable application that will allow citizens and governments to dialogue in real time about mobility, security and transparency issues. It will also enable citizens to report on quality-of-life matters such as garbage that hasn’t been collected, potholes or dangerous spots. With this data, Oincs’ primary goal  is to help city governments solve or even anticipate problems, based on observed patterns, thus helping to improve the allocation of always-scarce public resources. Many cities will   be looking at this idea to adapt Oincs to their specific needs. Some will place a priority on improving mobility, others on transparency, and still others on security and quality of life.

And now for the backflip. In the picture that opens this posts Wilkorwsky is surprising us after winning one of the Demand Solutions prizes. But the real stunt is the story of Oincs itself: how it overcame a minor controversy to become a tool to improve relations between governments and citizens. Yet another example of how our people are finding innovative ways to solve our most pressing problems.

Marcelo Cabrol heads External Relations at the Inter-American Development Bank, the largest multilateral development lender for Latin America and the Caribbean. As an international development expert, he currently manages all external communications for the IDB and coordinates efforts to bring to light the Bank’s work on innovation and entrepreneurship as a critical tool to accelerate development. As a leader and strategist, Mr. Cabrol is used to fostering a culture of change in complex and diverse environments to unleash creativity among those working with him to generate new business development opportunities. He has spearheaded Demand Solutions, a business model that applies entrepreneurial thinking and creative approaches to solving persistent development problems in fields such as health, transportation, energy, and citizen security. Previously, Mr. Cabrol served as a Chief of the Education Division at the IDB. In this role he redefined the Bank’s strategy and priorities, breaking existing paradigms to support projects that used technology to expand the reach and quality of several education programs in Latin America. He formed innovative alliances with several Fortune 500 companies, renowned international organizations, and academia in more than 20 countries in Latin America and the Caribbean. As a seasoned executive used to evolving management situations, he enjoys uncovering new talent, watching his people grow, and partnering with new organizations and businesses to develop innovative opportunities to improve lives in Latin America and the Caribbean.