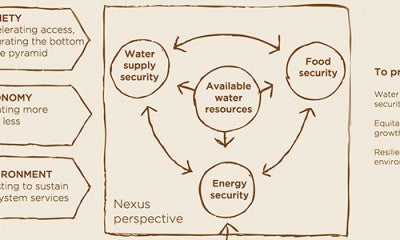 Source: SEI, as shown in the IDB Sustainability Report (2011).

I have been away from this blog for a while, and I was waiting for the right story to write again. This one in particular has a bit of remembrance.

I lost my mother to cancer nearly a decade ago. Like most children, I frequently didn’t pay attention to many of the things she used to say to me (I realize this now that I am a parent of two teenager daughters!). Fortunately, she talked to me a lot and over the years this made a few of these things she told me constantly stick somewhere in my head.

I remember she used to say: Life is not complicated, people make it so. Well, this phrase of hers came to mind when I started thinking again about an issue that caught my attention (and imagination) many years ago: the relationship between water, energy and food; what is known today as the water-energy-food nexus.

I grew up in Venezuela, a country of many contrasts. While being an oil country, the majority of energy consumed in the country comes from hydropower. And, while oil is used primarily for exports, a good fraction of the revenues from selling oil is used to buy food. So, this “salad” of water, energy and food has intrigued me for a long time, going back to my college years where I was exposed to the legendary work in Limits to Growth (more on this in a later post).

As I have worked and learned more about the region over the past 25 years, the countries in Latin America and the Caribbean  are physically and socioeconomically very diverse. Some areas have ample rainfall; others struggle to irrigate crops. Some countries rely on hydropower to meet large shares of their energy needs; others use mostly fossil fuels. Some countries have embraced production of biofuels with its accompanying concerns about ecosystem loss and competition with food crops.

All across the region, development has been the top priority for decades, and certainly the focus of efforts of institutions like the IDB. As a result of these efforts, income has risen in most countries, accompanied by increases in  both production and consumption. Accelerated development linked to globalization is also hastening urbanization and concentrating large numbers of poor people in peri-urban zones, where they are vulnerable to constrained availability of water, energy, and food. In rural areas, intensified agriculture responding to global demand for commodities, energy development, mining, and the expansion of infrastructure are degrading resources, disproportionately affecting the poor. Finally, climate change poses particularly acute threats to many areas, in particular the high mountain ecosystems in the Andes and some Caribbean islands.

A number  of key interactions illustrate the water-energy-food nexus in the region.

Water is needed for food production: 90 percent of the region’s agricultural land is rain-fed. In the water-constrained Andes, there is sufficient water to produce a diet of 3,000 kcal with 20 percent animal products. But changing precipitation patterns and growing demand for food are increasing the need for irrigation. Combined with urbanization, this is increasing pressures on rural landscapes and on water supplies.

Energy is needed for food production: This is the least well understood link, but food production, harvesting, transport, processing, packaging, and marketing all use up significant energy resources.

And like these, I could go on with many examples.

So, what are we doing about the water-energy-food nexus at the IDB? Well, I can’t tell you everything in just one blog post, so I will leave this part of the story for the next one.

In the meantime, I will tell you that while it is probably easy to understand the linkages between water, energy and food, approaching them in an integrated and efficient fashion gets much more complicated. Why you ask? Well, it seems my mother had the answer to this all along 🙂