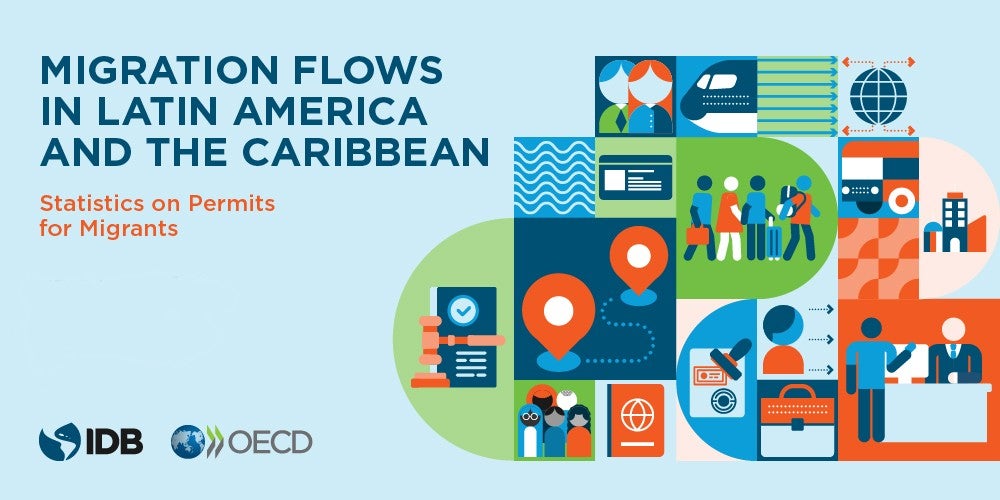 We are pleased to present the report Migration Flows in Latin America and the Caribbean, which provides the most comprehensive analysis of the residence permits issued by countries of the region over the five years between 2015 and 2019. This report is the result of an enormous effort by the Migration Unit of the Inter-American Development Bank (IADB) in collaboration with the Migration Division of the Organization for Economic Cooperation and Development (OECD) to compile this information in the most updated database on residence permits in the region.

The ability of institutions like ours to effectively support countries in the socioeconomic integration of immigrants, fully leveraging their potential to promote economic growth, relies on the availability of accurate and updated data to guide decisions and design public policies. This database is unique among recent multi-country data collection efforts related to international migration. It is intended to provide researchers and policy makers with statistics on international migration which are both comparable and understandable in national terms. The data are available online to explore in an interactive visualization.

Latin America and the Caribbean is experiencing significant changes in migration patterns. The crisis in Venezuela has displaced nearly 6 million people – second only to Syria – and is receiving far less international attention and resources. At the same time, there is a large and growing population of Haitians that have migrated to South America and are once again on the move. Large numbers are moving from the Northern Triangle of Central America into Mexico and towards the United States, and from Nicaragua into Costa Rica.

An interactive database on residence permits for migrants

The new database presented and described in this report compiles data on the number of permits granted in fifteen countries of the region by type of permit and nationality of the migrant over a five-year period from 2015-2019. This time frame clearly shows the ongoing transformation of the region from primarily one of emigration out of the region, to a much more complex scenario of growing intra-regional movements. In 2015 and 2016 the countries in the database issued less than 700 thousand residence permits per year. In 2018 and 2019 the number of permits more than doubled, while permits to immigrants from outside the region fell.

Latin America and the Caribbean now faces all the challenges of countries that send migrants, receive them, and host them in transit. The difficulties for the migration governance institutions in the region are significant. Considering only the Venezuelan crisis, for example, by the end of 2019 there were an estimated 1.1 million migrants without regular status in the region, representing nearly one third of the displaced population. While this number will be significantly reduced by the regularization program announced by Colombia in 2021, and other countries are reported to be considering similar initiatives, the challenges of irregularity for migrants and their host communities are significant, both for public administration and community relations. The evolution presents challenges to all countries, and this new database is one measure to better understand these phenomena and help guide policy and investments in the region.

Monitoring migration flows is fundamental to the ongoing work of both the IADB and the OECD. This new database, which will be updated and expanded going forward, is a key part of that effort. Additionally, we have an ongoing collaboration to produce indicators of migrants’ socioeconomic integration in Latin America and the Caribbean, which will be published in the coming months. We will continue to work together, and with other partners, to produce the data needed to inform policies and investments that enable the region to overcome these challenges, and to maximize the benefits from international human mobility in the region and beyond.

Jean-Christophe Dumont has been the Head of the International Migration Division in the Direction for Employment, Labour and Social Affairs, OECD since 2010. He joined the OECD Secretariat in 2000 to work on international migration issues. He oversees the OECD annual flagship publication on migration International Migration Outlook and of numerous publications on the economic impact of international migration as well as on migration management and the labour market integration of immigrants and their children in OECD countries. He has also worked on migration and development issues and on the international mobility of health workers. He holds a PhD in development economics from the University Paris IX-Dauphine and was a research fellow at Laval University, Quebec, Canada.