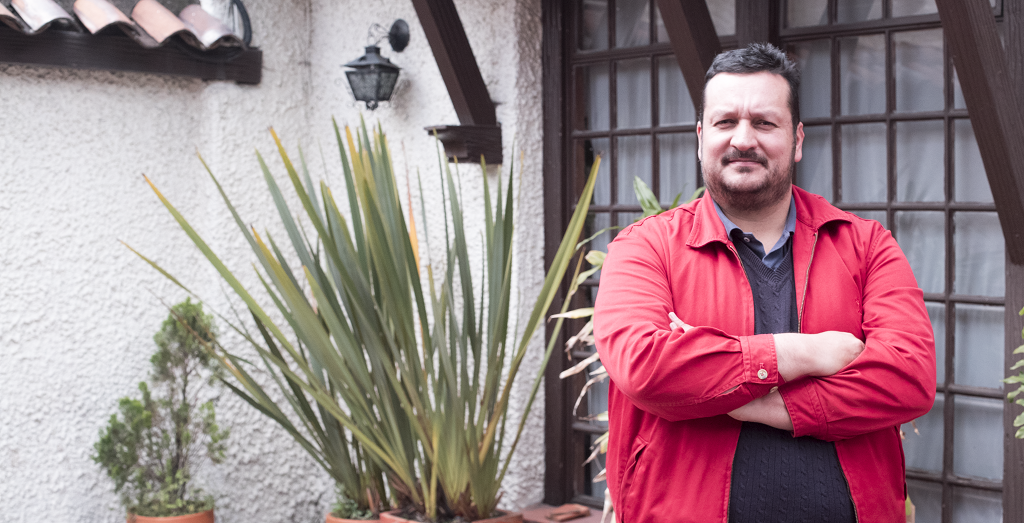 Luis Martínez is originally from Bogota, but life’s twists and turns meant that he ended up working as an administrative employee at a bank in Canada for 13 years. Back then, he might not have imagined that he would become an entrepreneur, but he was definitely already a technology enthusiast. While he was working at the bank, he learned to program and got interested in new animation trends. He and a few friends started a 3D animation project and began to sell their services to cinemas.

Luis says that the next step was overcoming prejudices.

We Latinos often start off thinking that we’re inferior to everyone else. Learning about this technology has changed how I see things. When I began to visit other countries and showed people what we do, I discovered that they thought it was great, even better than what was on offer locally. When you can get out there and show people your work, get them interested in your project, and then find that they ask you for a quote, you realize that your work is pretty good after all. We Latinos are just as capable as people from other countries—maybe even more so. Latinos in creative industries can break through those barriers

Luis Martínez says proudly from his office in Colombia.

After starting out in the animation industry in Canada, Luis decided to return to Colombia and set up Brash 3D, which began by making standard promo videos and then incorporated 3D animation and imaging.

“We are a technology company that creates innovative solutions for companies. We mix video with technologies such as augmented and virtual reality. It builds brand recognition and people really seem to like it,” says Luis, now the CEO of Brash 3D. There are nine people on his team, including architects, engineers, and artists. He also has business managers in different countries in the region.

One of the company’s star products are their augmented reality business cards. After downloading the Brash 3D application to a tablet or smartphone, users can project augmented reality animations onto the card, play videos, or go on virtual tours (see demo video).

“Around 95% of people just toss regular business cards away. So we created an app to make them more interactive and attract people’s attention, so that when you show them to your friends and colleagues you are actually expanding your business reach,” Martínez says.

His experience at Outsource2LAC Costa Rica

The augmented reality business card helped Brash 3D to capture different business opportunities during Outsource2LAC Costa Rica (link in Spanish), the biggest outsourcing and offshoring event in Latin America and the Caribbean, which the Inter-American Development Bank (IDB) organizes each year through its online platform ConnectAmericas.com

Over 800 entrepreneurs from 32 countries took part in the 2017 event in Costa Rica, at which around 3,200 bilateral business meetings were held. There was also a focus on the latest breakthroughs in animation, video games, and virtual reality.

“Costa Rica was really a turning point for me. I was having a coffee with another entrepreneur and showing him how our augmented reality business card worked, when Juan Luis Flores from the Peruvian company Sgtel came over to see what I was doing. He told me that he worked in tech, too, and that he’d been looking for a solution like ours and wanted to take the project to Peru,” Luis says.

Over the next three days at Outsource2LAC Costa Rica, the teams from the two companies quoted the project and closed the deal. “Sgtel needed to apply augmented reality to some drawings in a book on the Smurfs,” Luis says, explaining how this technology requires hours and hours of programming and a lot of creativity.

Luis Martínez has since taken part in different events organized by the IDB and ConnectAmericas. “We’ve been to events in Korea, China, and Mexico. You can generate really important leads at gatherings like these. You meet people that you can build great business synergies with. It’s like one big family that you can play an important part in. The support that we received from the IDB, ConnectAmericas, and the entire team working at the forums was enormous. Events like these really put companies in the spotlight,” Luis says.

One of the projects that came out of those trips was a job for Fundación Albatros Media, in partnership with the IDB, the aim of which was to raise awareness about endangered species through an augmented reality application.

Luis is still thinking about growth. He acknowledges that some aspects of business in Latin America need to improve. “There is little support or government incentives for developing technology. We were invited to the US Embassy for an event and found that we could set up there with tax benefits. If we believed in our potential a bit more, we could be on a par with just about any place on earth, and we shouldn’t forget that,” Luis Martínez argues.

He and his partners have created a Facebook community to help other entrepreneurs, which already has over 135,000 followers. “I’m really grateful that I’ve always been given the chance to learn, one way or another, and I want to pass that chance on to other people who are exploring similar paths.”