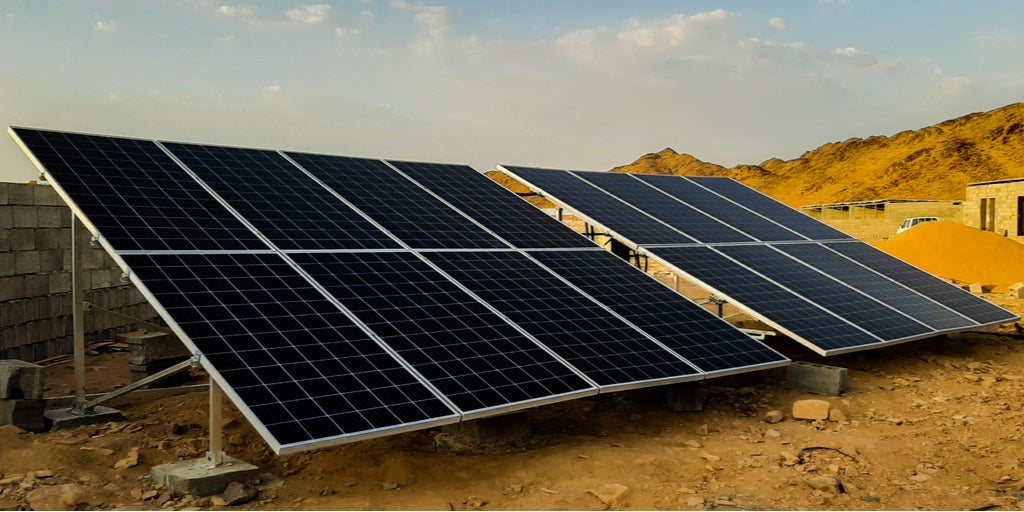 For most of the last century, we’ve used a single metric to understand how a society is doing in supplying its citizens with power: electrification rates. By that standard, most of Latin America is doing very well, with 97 percent of households in the region having access.

But the binary metric of whether people have electricity access or not can be misleading. It fails to capture whether a nation’s electricity system is the sturdy foundation that it must be in order to support a modern, dynamic, and equitable economy.

If electricity is going to help drive development, it matters whether electricity is available when it is needed. It matters if electricity can power the equipment that users demand. National electrification rates can mask these system weaknesses.

Especially in the era of Big Data and off-grid electricity systems that offer alternatives to the traditional grid, governments need to see the full picture. They need tools to make critical electrification decisions less of a political exercise and more of an evidence-based process.

In the first partnership undertaken between Duke University (Energy Access Project), SEforALL and IDB, a team developed an “Energy Access Dividend” methodology specifically for Haiti and Honduras that can help drive more informed electricity planning. The approach can be used to understand the aggregate level of benefits that electrification can unlock, how to achieve these benefits and for whom. This approach built upon the model developed by SEforALL and Power for All in the 2017 report Why Wait; Seizing the Energy Access Dividend studying the foregone benefits of delayed energy access in Bangladesh, Ethiopia and Kenya.

The research team attempted to quantify and monetize the benefits generated through accelerated electricity access. Criteria utilized included savings that electricity access generates on lighting and cell phone charging expenditures, the impact it has on emissions, and changes it produces in study time among schoolchildren.

The team’s analysis also incorporated the benefits to household ownership of appliances like fans, televisions, and refrigerators, and how electricity reliability impacts household productivity. Crucially, where the data allowed, the team considered the type of energy access needed to support each of these categories of benefits. To do this, the report utilized the Multi-Tier Framework (MTF)[1] which categorizes households into energy access tiers depending on the quality, capacity, daytime and evening duration, reliability, legality, and safety of their electricity access. 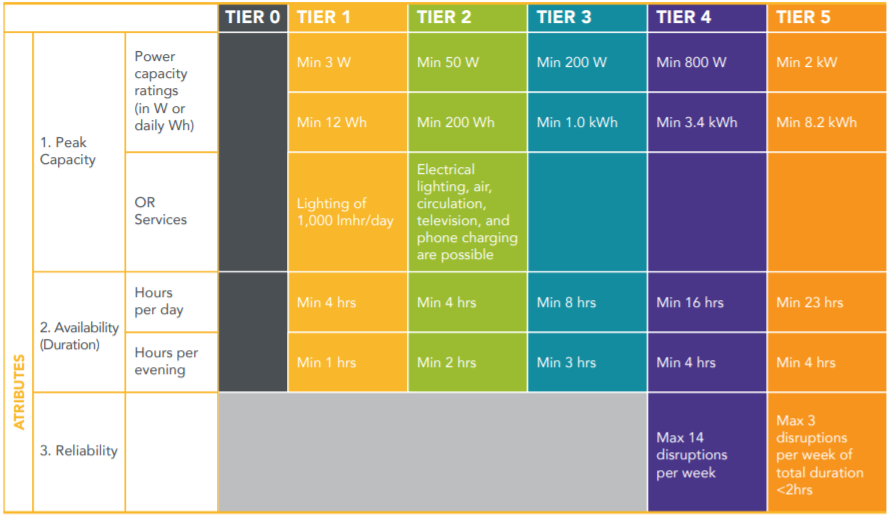 Haiti’s national electrification rate is the lowest in Latin America and the Caribbean. While that rate has been climbing by about 1 percent annually over the last decade, the country is not on track to achieve universal access by 2050.

Building out the generation capacity and the transmission and distribution networks to supply universal grid access will be expensive and take many years. The research team looked at the benefits that “tier 1” access options could provide in the meantime.

Typically taking the form of distributed solar systems equipped with lights and phone charging capabilities, these solutions may fall short in providing sufficient energy to power assets like televisions and refrigerators and may be inadequate to power some small businesses, irrigation equipment, or other productive applications. But they do have critical advantages in terms of low cost and fast deployment.

The research team found that basic “tier 1” electricity access would bring the average unelectrified household an estimated annual benefit of USD 16.20 from reduced kerosene consumption for lighting, USD 10 from reduced cell phone charging expenditures, and USD 3.80 from reduced climate-affecting emissions (which accrues to society more broadly). Aggregating these benefits across Haitian households that are not on pace to be electrified by 2050, we found that more than USD 423 million in economic benefits could be realized.[2]

Most people in Honduras have unreliable power. It’s holding them back

International attention on energy access has increasingly focused on Sub-Saharan Africa, and rightfully so, as more than 600 million people in the region are projected to still be without basic access in 2030. But electricity reliability and low-quality power systems are constraining people and national economies around the world. Honduras is the perfect example.

More than four out of five people have electricity access in Honduras, but the country remains severely constrained economically because 62 percent of households do not have access to “tier 5” electricity, which is the standard for safe, reliable electricity available at least 23 hours/day. This is important because households with more reliable, higher capacity electricity access begin to use electricity as an input to income generation. As such, they may incur income losses when they experience unexpected interruptions in access.

Our research looked at these income effects and how additional benefits are likely to accrue as reliability increases. We also considered the benefits that come with increased ownership of four key household appliances: radios, fans, televisions, and refrigerators.

We found that the economic benefits of improving power quality to households that have it can be greater than providing basic access to first-time users. Honduras has a much smaller unelectrified population as compared to Haiti and their business-as-usual electrification rate leaves far fewer people un-electrified in future years.

So, estimating the same “tier 1” electricity access benefits—phone charging, lighting, and climate pollution—for Honduras that we did for Haiti yields a much lower figure of USD 54 million through 2030.[3] However, once we start to consider appliance acquisition and household productivity growth, the picture is very different. Incorporating the benefits that come with higher tier access could yield an additional USD 267 million in benefits in Honduras.

It is important to note that these benefits are based only on individual households, and therefore understate the potential gains. Including the benefits to businesses, while outside the scope of the report, would increase these figures greatly, as reliable power is prerequisite for firm competitiveness in most sectors.

The “Dividend” model not only illustrates the aggregate level of benefits that electrification can unlock, but it can demonstrate the modalities (grid, mini-grid, solar home system) and populations (urban vs rural, low-tier vs high tier) that benefit. This can be crucial for improving the targeting and effectiveness of electricity planning.

While the electrification debate in many places frequently centers on the cost of power provision, the methods established in The Energy Access Dividend in Honduras and Haiti will, hopefully, help to quantify the massive cost of not electrifying populations. It provides an illustration of what integrating more granular household data into electrification policy making can yield.

[1] Developed by the World Bank

Jonathan Phillips is the founding director of the Energy Access Project at Duke University with an appointment at the Nicholas Institute for Environmental Policy Solutions. Phillips was the senior advisor to the president and CEO of the Overseas Private Investment Corporation during the Obama Administration, where he helped manage operations of the 400-person development finance institution, scaling-up the agency’s climate finance capabilities and leading the implementation of strategic initiatives, including the agency’s $2.1 billion engagement in Power Africa. Before that, Phillips served as the deputy lead of the private sector team with Power Africa at the U.S. Agency for International Development and held a variety of roles in the U.S. Congress, most recently serving as the senior policy advisor to Senator Ed Markey of Massachusetts. He received a bachelor’s degree from the Milwaukee School of Engineering and a master’s degree in public policy from the Harvard Kennedy School.

Natacha C. Marzolf is a Principal Energy Specialist in the Energy Division of the Infrastructure and Energy Department and is based in Washington DC. She joined the Bank in 1996, selected by the Young Professional Program and has over 20 years of experience originating, structuring and disbursing sovereign and non-sovereign project finance and corporate finance transactions, in particular in the energy sector in Latin America and the Caribbean. Her most recent publications in the energy field include her second monograph on “A Unique Approach for Sustainable Energy in Trinidad and Tobago” (2015) making the case that climate-friendly and low-carbon green technologies are a viable and sustainable path for fossil-based economies such as Trinidad and Tobago; “Emprendimiento de la Energía Geotérmica en Colombia” (2014), “Power and Possibility: the Energy Sector in Jamaica” (2011) and “Instrumentos Fiscales y No Fiscales en Chile” (2010). She is also one of the authors of the article ”Analysis of renewable energy incentives in the Latin America and Caribbean region: The feed-in tariff case” (Energy Policy, Volume 60, September 2013). In 2018, she led the first academic partnership with Duke University and Sustainable Energy For All (SEforAll) working on the publication of the “Energy Access Dividend in Latin America and the Caribbean” (expected release date late 2019) based on the multi-tier framework methodology. Most recently, Ms. Marzolf focused her work on Haiti, assembling investment financing for several large infrastructure projects and advising on policies to improve the energy sector. Ms. Marzolf is a graduate of Harvard Law School and holds a post-graduate degree in Development and Economics Law from the University of Paris V and a Master’s in International and European Law from Paris II – Assas.

Hadley currently holds the position of Associate Energy Access Specialist at Sustainable Energy for All, where she focuses on working with partners to accelerate speed and scale in addressing the energy access gap, particularly in Africa. To date she has focused her career on providing energy policy advisory services to governments to achieve energy access targets, as well as designing end-user financing schemes to address affordability gaps for off-grid electrification. Hadley holds a Master’s of Public Policy Degree from the Hertie School of Governance and a dual Bachelor’s degree in Political Science and Global Development Studies from Queen’s University.