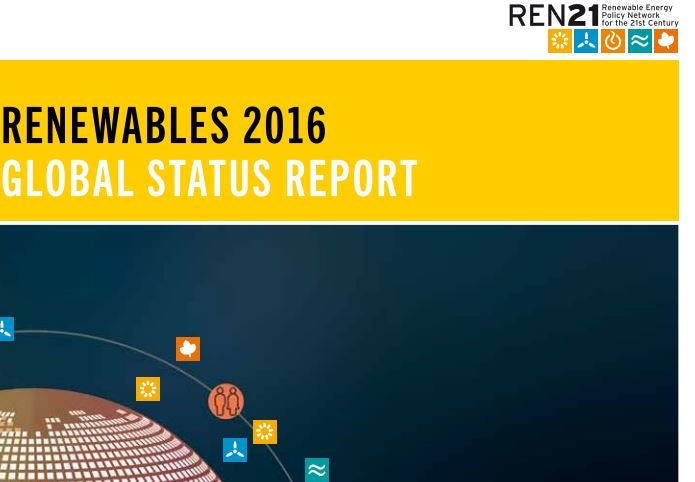 *The 2016 key findings report is available in Portuguese here.

The REN21 Renewables 2016 Global Status Report indicates that countries across Latin America and the Caribbean continue to have some of the world’s highest targeted shares for renewable energy deployment. The Renewables 2016 Global Status Report is the world’s most frequently referenced annual report on the global renewable energy market, and the industry and policy landscape. It has been published since 2005 by the REN21 Secretariat, relying on a multi-stakeholder network of 700 renewable energy, energy access and energy efficiency experts that collectively share its insight and knowledge. The REN21 reports can be downloaded here. A Spanish version of the 2016 key findings can be found here.

Latin America and the Caribbean remain at the forefront of the use of competitive bidding for renewable energy project allocations, with many tenders attracting record-setting participation. Several countries – including Brazil, Chile, Mexico, and Peru – held successful tenders in 2015 and early 2016, resulting in some of the world’s lowest bid prices, due in part to the region’s vast renewable energy resources.

Biomass-based heat accounts for almost a third of industrial heat production in Latin America. Honduras, Uruguay, and Jamaica ranked respectively second, third, and fifth in the world in investment in renewable power and biofuels per unit of GDP.

As far as jobs in the renewable energy sector are concerned, Brazil is among the leading employers for all technologies. Most employment in renewables is in bioenergy and large-scale hydropower, however in the wind sector jobs are increasing due to rising deployment and local manufacturing. Elsewhere in Latin America, jobs also are increasing in the wind and solar sectors.

REN21 is proud to work closely with the SE4All initiative to achieve the three SE4All objectives by 2030: (i) to ensure universal access to modern energy services; (ii) to double the global rate of improvement in energy efficiency (EE); and, (iii) to double the share of renewable energy (RE) in the global energy mix.

The IDB collaborates with REN21 every year and acts as the SE4All hub for Latin America and the Caribbean, helping the region reach these three objectives in collaboration with other key regional organizations such as the UNDP, ECLAC and OLADE.