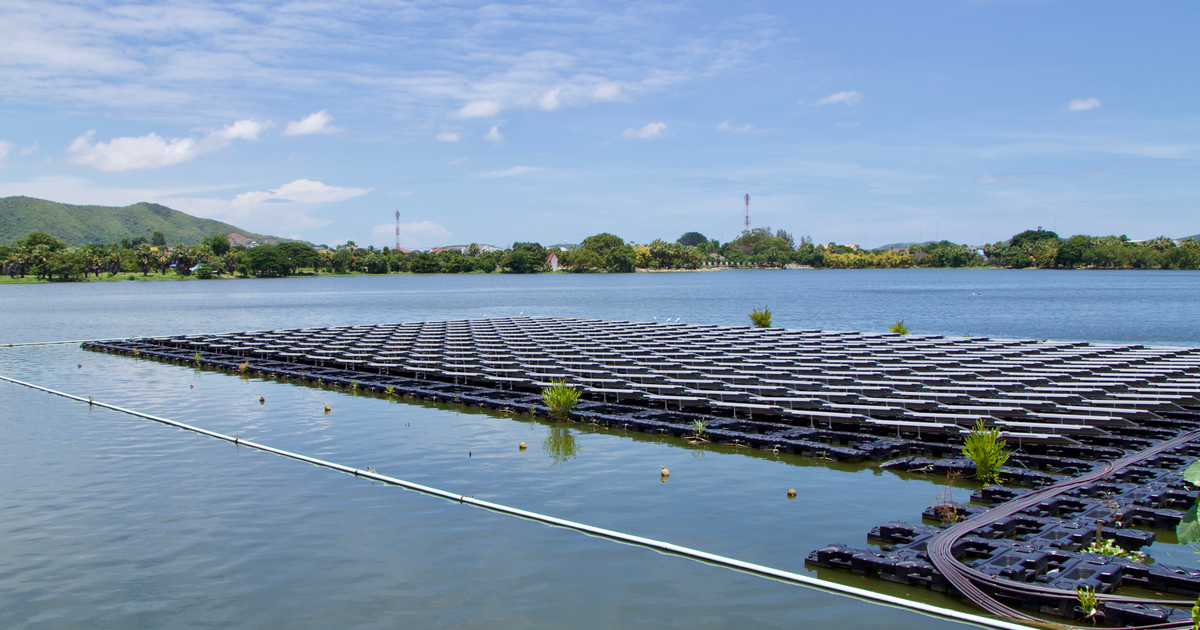 FPV systems present certain advantages and benefits over land-based systems. One of the main advantages is that these projects will not compete with other land uses, a relevant aspect especially for Small Islands Developed States and other countries where land availability for power generation is scarce. The World Bank estimates that by only using 5% of the water reservoir surface in Latin America would be possible to install more than 180 GW of solar floating energy, a value equivalent to the total installed capacity of hydroelectricity in the region. Additionally, these systems can bring other benefits to the reservoirs, as reducing evaporation and the eutrophication of the water body.

Likewise, FPV can have a greater energy performance than traditional solar projects since the water helps cool the solar panel -minimizing the thermal losses- and the panels receive higher solar radiation thanks to the water reflection. Additionally, the losses related to shadowing most likely will be lower than land-based solar plants.

The possibility of adding floating solar capacity to existing hydropower plants is of particular interest, as the FPV can complement the hydro resource, compensate the electricity production from hydroelectric plants during dry seasons, and reduce water evaporation in the reservoir, thus increasing the hydroelectric generation. Additionally, the hydropower plant can be flexibly operated to adjust its generation to the short-term variability of solar energy.

The capital costs of FPV are still slightly higher (or comparable) to ground-mounted PV projects. However, they are expected to drop over time, owing to better economies of scale. Total capital expenditures for turnkey floating PV installations in 2018 generally range between USD 0.8–1.2 per Wp, depending on the project’s location, the depth of the water body, variations in that depth, and the size of the system.

Considering all the advantages described above and the high contribution of hydroelectricity in Latin America, which in 2019 supplied about 45% of the electricity demand, it seems that FPV is an up-and-coming technology with a huge potential for the region. However, it is still a technology in a very early stage of development, and only a few pilots have been implemented or planned, for example, in Panamá, Colombia, or Brazil.

IDB supports the development of FPV in Suriname

The Interamerican Development Bank (IDB) is supporting the development of FPV in Suriname with a Technical Cooperation financed by the Japan Special Funds to study the feasibility of integrating FPV in the Afobaka hydropower plant, which currently generates about 50% of the total electricity consumed in the country. The electricity supply in Suriname is critical during peaks periods in the dry season, coinciding with the warmer and sunnier periods of the year, where also consumption of air-conditioning in buildings tends to be higher.

This project will help to supply electricity during these peaks and optimize the management of water resources to have reserves at critical moments. The FPV system can be connected to the same transmission line from the hydropower plant, managing solar and hydro generation in an integrated and optimal way for the grid. The Technical Cooperation will also analyze the value chain for the supply, installation, operation, and maintenance (O&M) of the project and propose recommendations to increase local content and create new local green jobs.

There are still many open questions regarding proper implementation of the technology: which additional feasibility studies need to be carried out to protect the local environment? what are the differences in O&M practices compared to traditional ground-mounted PV plants, and do they cost more? How do tender processes and procurement contracts need to be adapted to the new technology? In order to answer these and many more questions and close the existing knowledge gap, the IDB has partnered with the Clinton Climate Initiative (CCI) to launch a floating solar virtual training focused on Latin America and the Caribbean. The courses include a Technical Track (including a new module on hybrid systems, including FPV-hydro hybrid systems), a Procurement Track and is especially suited for decision-makers and technical staff at hydropower utilities and public sector organizations interested in the development of the technology.

If countries are serious about accelerating the decarbonization agenda, we need to consider all technically and economically feasible options, and FPV has the potential in our region to make a concrete contribution to that common goal. Other technologies like the offshore wind have gotten their feet wet with great success in many countries. Now it’s the turn of FPV to start generating sustainable and affordable electricity for all.