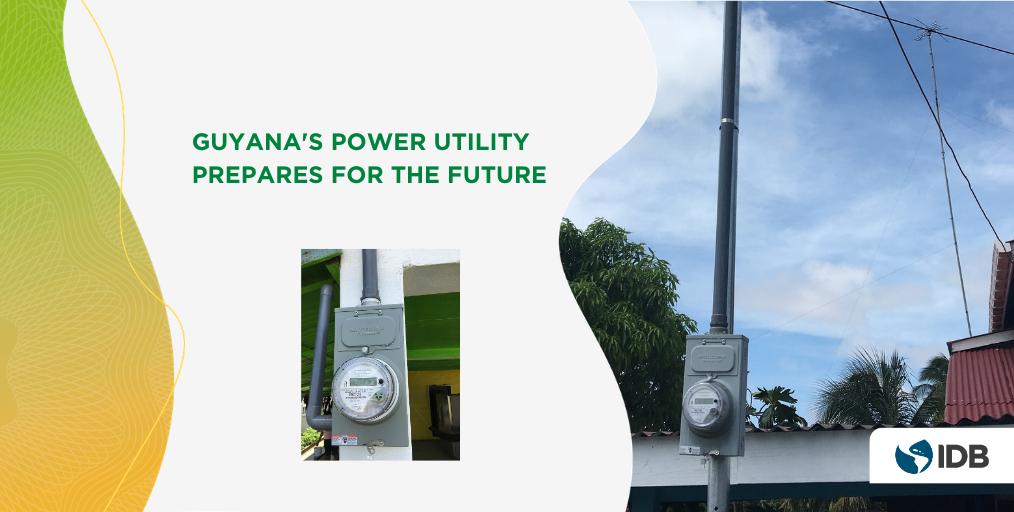 Encouraged by the opportunities presented by the continued evolution of digital technologies within the electricity sector, the main electricity supplier of Guyana has made important advancements in the last years to transform the sector. The Guyana Power and Light Inc. (GPL) is the main state-owned electricity supplier in the country with operations encompassing, generation, transmission, and distribution, which provide service to approximately 188,000 customers across the coastal Demerara-Berbice Interconnected System (DBIS), and smaller isolated grids on the Essequibo coast, the hinterland town of Bartica and the island of Leguan.

GPL’s operations although steadily improving through the implementation of targeted plans, have been faced with several challenges including low levels of reliability, aged generation and network infrastructure, and high levels of electricity losses.

Despite these challenges, there has been creditable progress over the last years with regards to the reduction and control of losses, in part attributed to a strong focus on technological improvements along the utility’s value chain. Such improvements include the adoption of modern customer information, inventory management and more recently, a business intelligence system, together with innovative construction methods to secure meter interfaces, and distribution network rehabilitation works.

In furtherance of the company’s drive for continuous improvement, other important digital interventions being pursued include the overhaul and upgrade of the SCADA system and GIS asset and customer mapping. However, one of the more transformational digital initiatives implemented by GPL to date, with the support of the Inter-American Development Bank (IDB) has been the introduction of smart meters under the “Sustainable Operation of the Electricity Sector and Improved Quality of Service”, as part of an Advance Metering Infrastructure (AMI) Pilot Project, and through the IDB-European Union (EU) co-financed “Power Utility Upgrade Program (PUUP)”, as part of an integral distribution network rehabilitation program.

Prior to the introduction of smart meters, GPL’s metering infrastructure was initially based on electromechanical meters, and by 2006 there was a transition to automated meter reading technology and prepaid meters. Subsequently in 2011, through a workshop facilitated by the IDB, and including the Dominican Corporation of State Electrical Companies (CDEE) of the Dominican Republic, GPL learnt of CDEE’s positive experiences with AMI, especially with regards to loss reduction. This exposure ultimately stimulated GPL’s interest in the technology and was the genesis of the AMI pilot project[1].

The AMI Pilot Project ultimately installed 2,094 smart meters together with complementary network equipment, host server and software. GPS data for individual meters were also logged during installation, along with circuit and transformer mapping. Overall, the results of the Pilot have been positive with the primary loss reduction objective being achieved. In this regard baseline data for August, September and October 2013 in the Pilot zone indicate that losses were 42%, 39% and 38% respectively, while post AMI implementation data in January 2016 show that losses in the Pilot zone stood at 25%.

The modernization of infrastructure and the impact on losses

With the commencement of the IDB-EU co-financed program “PUUP” in December 2014, under Component III: Infrastructure Investments for Loss Reduction, GPL continues to modernize its metering infrastructure and loss reduction capability, through mass deployment of smart meters, beyond the Pilot zone. To date, approximately 35,242 smart meters have been installed across the distribution networks of several communities in Regions 3,4,5 and 6, which encompass the entire DBIS. This intervention has contributed to the consistent decline of GPL’s overall losses in recent years, and at the end of December 2020, the reported figure was 25.86%, down from 31.4% at the start of the Program in 2014. In addition, other operational benefits of the installed smart meters for GPL include greater accuracy in consumption data and more efficient and flexible meter reads. In this regard, meter reads are now retrieved automatically, without need of entering the customers’ premises.

By the end of the current PUUP Program in October 2021, another 8,596 smart meters will be installed, and another AMI project is being conceptualized for the hinterland township of Bartica, under Component 1 of the IDB-financed program: “EMISDE”. Moreover, based on the Government’s 2021 Budget presentation, GPL will continue the “phased transition from Automated Meter Reading (AMR) technology to AMI technology”. Considering this policy position and the progress achieved by GPL to date, further planning will be required in the coming years, together with the commitment of developing the required communication networks to fully leverage and integrate the deployed smart meters, as fundamental components of an AMI system, and potentially a fully operated GPL smart grid of the future.

[1] IDB approval of the Smart Metering Pilot Project was granted in May 2012.

Lerone Williams is an energy consultant providing technical support for the supervision of projects in the Guyana energy sector which encompass the areas of power sector development, deployment of renewable energy technologies, and improved energy access in hinterland communities. Before joining the Bank, he was Engineer and Program Manager at the Ministry of Public Works in Guyana, responsible for the maintenance and upgrade of electrical and mechanical building systems within the public sector. During his time at the Ministry, he was also integrally involved in the inspection, and certification of residential, commercial, and industrial installations across the country. As an energy and power systems consultant in the private sector Lerone is also experienced in conducting commercial grade energy audits and designing electrical and solar PV installations. He has also worked with the UNDP office in Guyana supporting the Energy, Environment and Extractive Industries Program. Lerone is an Electrical Engineer, from the University of Camagüey in Cuba, and holds a Master of Business Administration, with specializations in Energy, Innovation and Finance from the University of the West Indies, Arthur Lok Jack Global School of Business. He is also a Project Management Professional (PMP) from the Project Management Institute.