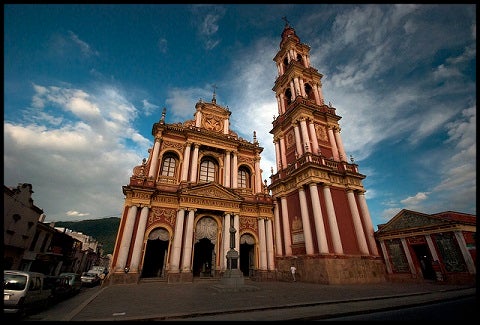 Endowed with rich and diverse natural and cultural resources, Argentina’s Salta Province has long been known to have tremendous but untapped tourism potential.

Located at the intersection of such natural attractions as the Andean highland plateau (the Puna), the Chaco forests, and the subtropical forest in the Yungas Biosphere Reserve, Salta’s landscape is graced with everything from colorful hillsides to sparkling ravines, mountain peaks, volcanoes, and salt flats.

Salta also boasts significant cultural wealth, including Indigenous and aboriginal communities, colonial heritage, archaeological sites, and even cave paintings from the precolonial period. The monumental Tren a las Nubes (Train to the Clouds) is one of the highest railways in the world.

Despite its attributes, Salta remained one of Argentina’s least developed provinces well into the early 2000s, with GDP per capita about half the national average (US$4,000 versus US$7,500 in 2001). Salta’s tourism industry lagged behind the rest of the country, as well.

The devaluation of the peso in 2001 presented an opportunity to boost tourism because it lowered the cost of visiting Argentina relative to other international destinations. Salta’s provincial government moved to take advantage by implementing a Tourism Development Policy (TDP), with coordinated interventions to boost the province’s tourism industry, and in so doing create new employment opportunities for the local population. The TDP measures included:

The Inter-American Development Bank (IDB) supported the TDP with a loan to the province of Salta specifically directed toward supporting the tourism industry.

The TDP had all the ingredients to turn around Salta’s flagging tourism industry, but measuring the effectiveness of structural interventions like this has long been a riddle for evaluators. In an ideal world, they would travel back in time, erase the intervention, and measure the difference in the result, which would become what is known as the “counterfactual” to what actually happened.

In the absence of such a time machine, evaluators usually set up an artificial “control group” and then measure the results of the intervention against that comparator—not unlike a medical study that administers a drug to one group and a placebo to another and then compares the results to determine the effectiveness of the drug.

In the case of a broad policy such as the TDP, which involves a wide variety of economic agents across the tourism industry and a broad set of interventions at different levels, constructing a control group to estimate a counterfactual is highly challenging.

One possibility is to focus the evaluation only on those policy elements (such as tax credits) for which beneficiaries and comparable non-beneficiaries can be identified. This would produce rigorous evidence on the effectiveness of such elements, but at the cost of missing the structural and complex nature of the policy.

Another possibility is to adopt a structural model approach, such as a computable general equilibrium model, in which most of the relationships between different parties would be simulated.

This would better account for the comprehensive nature of the policy, but at the cost of less rigor in identifying the causal relationship between the policy and the observed effects.

To deal with this tradeoff between completeness and rigor, the IDB used a new measurement approach developed by Harvard University’s Alberto Abadie and his co-authors, called the Synthetic Control Method (SCM).

The SCM statistically combines other Argentine provinces to construct its fictional comparator—a sort of “clone province” that approximates the characteristics of Salta as closely as possible. If only a single province were selected as a comparator, it might be very similar to Salta in terms of its tourism potential, but perhaps very different in terms of per capita income levels or other characteristics.

Using the SCM enabled evaluators to construct a comparator similar to Salta across the board.

Using the SCM and drawing on data from Argentina’s Observatory of Employment and Entrepreneurial Dynamics, evaluators created not only one, but two “synthetic clones”—one for the province as described above, based on a weighted combination of other Argentinean provinces that in the seven years before the TDP’s launch had trends similar to Salta, and another for the Argentine tourism sector in general, based on a combination of different industries within the province. This evaluation has been the first to use two separate clones.

The evaluation found that Salta’s TDP increased employment in the hotel industry by an average of 11 percent per year, for an overall impact of around 110 percent between 2003 and 2013.

Over the same period, the TDP doubled employment in the core sector of the tourism industry, which likely generated other positive employment effects on sectors upstream and downstream along the tourism value chain. Importantly, the evaluation results were consistent in the comparisons with both synthetic clones.

The IDB’s rigorous evaluation of Salta’s TDP shows that integrated efforts to produce structural change across a number of areas in a specific industry can effectively boost the growth of that industry.

The evaluation also shows that complex structural programs can indeed be evaluated in a much more rigorous manner than the traditionally used case study approach.

This also opens the door to using the same approach with the creation of multiple synthetic control units to evaluate programs with a dual industry-location focus, such as the widely diffused cluster development programs.

This story is part of Chapter 6: In Search of Attribution – Our Impact Evaluations, Developmet Effectiveness Overview.