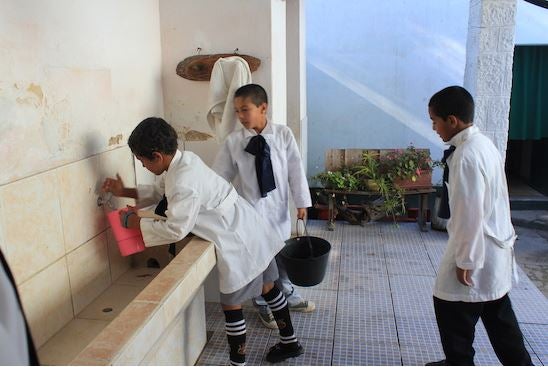 Much of the education economics literature focuses on how combinations of inputs, incentives and institutional structures result in better education results, in human capital accumulation and, in the longer term, in higher wages and economic growth. In this literature, less attention has been given to external factors, such as the availability of safe drinking water, personal safety or reliable electricity.

A recent paper for Brazil aims to close that gap, looking at the “relationship between access to tap water and schooling achievement which has not been done so far”. The authors (Julia Alexa Barde y Juliana Walkiewitcz from the University of Freiburg) focus on whether a child (fourth graders with an average 10.8 years of age) has access to tap water at home at the time when the Brazilian national standardized tests were administered between 1999 and 2005.

The study used data from the Sistema Nacional de Avaliação da Educação Básica, the national education evaluation program implemented every two years by the Brazilian Ministry of Education in that period (in 2007 the question on water access was dropped).

The authors find that the effect of piped water on test scores is significant (explains 11 percent of the standard deviation of test scores) and this effect increases with the level of education of the mother, particularly for families with lower incomes.The identification strategy is based on a regression model where standardized test scores are a function of water access at home, a vector of control variables related to the child’s economic background, school and time fixed effects.

The authors admit that their identification strategy is “not methodologically absolutely safe” [in terms of establishing causality] as they do not dispose of a good instrument for access to water and their data is “neither experimental nor does it allow for regression discontinuity design”.

One wonders if it was not possible a randomized phase in design taking advantage of the introduction of piped water, particularly in the North East in Brazil, where water connection rates were lower.

Nevertheless, the authors perform a comprehensive battery of tests on the proposed specification to rule out that “the error term contains some unobserved component which drives the probability of having tap water at home and the test performance in the same time.”

That is twice the effect of piped water. These are important results as it is the first time that a direct connection between piped water and educational results is established, although the identification strategy could not establish causality.

Nevertheless, the various specifications do not include (data issues?) a variable for the presence of piped water – or bathrooms – in the schools themselves. This is not a minor issue because this unobserved variable could be biasing the estimations.

In one of our latest blogs we presented new Guidelines for Impact Evaluation in Education which included information on which type of investments in education have the most – or least – impact. In primary education, investments in nutrition and early education have large effects (above 0.4 standard deviations on test scores), modifying inputs (like teacher training) tend to have medium effects (above 0.2 standard deviations) and information changes have little or no effect. And effect size varies a lot depending on the context.

In conclusion, we know that having water – and electricity – is important and that it is linked to education results, but we need more hard evidence.