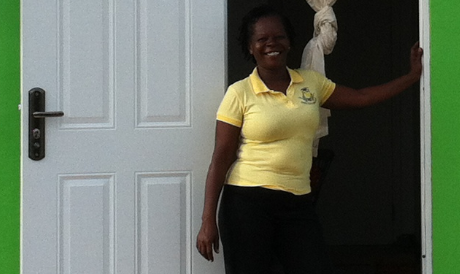 Suriname finds an affordable housing solution for less than $15,000.

Mrs. Urmie Elisabeth Wijnstein is a single mother in Paramaribo, the capital of Suriname. She has a steady job cleaning government offices, but with a salary of just US$260 a month she never was able to rent or buy her own home. She had to live with her mother, sharing a room with her two sons.

Her job and some savings were not enough to qualify for a bank mortgage, because most banks in Suriname target middle and upper income class clients. Even if they had considered her request, she could not afford any of the houses on the market.  Like the banks, Suriname’s housing industry caters mostly to middle and upper-income buyers, who account for just 20% of the population.

Prices are high because there is a shortage of affordable urban building sites, and because financing costs for developers and buyers alike are high. Low-income families build their own simple homes on vacant lots or hire small contractors to do it for them. The result: higher construction costs and less-than-ideal quality standards.

In 2011, the Wijnstein family’s opportunities for housing improved dramatically, thanks to a Suriname government program that aims to provide affordable housing options and improve the quality of the available housing stock for low-income families. The program, financed by the Inter-American Development Bank (IDB) provides a one-time US$3,000 up-front subsidy per household which can be used either to improve or expand existing living arrangements, or towards a down payment for a new home.

Families either need to own land on which to build the house, or they can apply to receive the subsidy to improve their current housing situation. Eligible households have a maximum income less than or equal to US$400. Furthermore, a cap of US$15,000 per house was set to ensure that beneficiaries could afford their mortgage payments. The program features a complex targeting system that identifies qualified families without having to rely on self-reported income or pay slips.

The program identifies qualified families without having to rely on self-reported income or pay slips.

The government worked hand in hand with housing developers and financial institutions to ensure that they would take the risk to work with low-income clients. Non-governmental organizations promote the program in eligible communities and helped potential beneficiaries with their applications. The government, which owns 98 percent of the country’s land, agreed to allocate some urbanized lots for low-income housing developments.

In the four years since the inception of the program, more than 2,000 homes have either been improved or expanded, and only 87 new homes have been built. While, as part of the program, two large developers successfully collaborated to design a 50 square-meter house costing the maximum of US$15,000 and two financial institutions did engage in providing mortgages to low-income clients, this second result falls considerably short of the original target for new homes.

This is because most program beneficiaries are too poor to pay for land and simultaneously take-on a mortgage for the house itself.  The project has demonstrated that even if subsidies can increase the ability of low-income households to buy new homes, the lack of affordable urban land remains a binding constraint in Suriname. Aside from some instances in which the new house was built on the same lot as that of a family member, most of the 87 new homes were built on government-sponsored housing developments where the urbanized land was given for free to beneficiaries.

Given the high cost and low availability of urbanized lots, most beneficiaries opted to improve existing homes, spending the up-front subsidy to purchase materials or hire small contractors to fix roofs, install tile floors, improve water and sewer connections, or add on new rooms. Overall, 95% of the beneficiaries express satisfaction with the program.

One such  beneficiary, Mrs. Wijnstein built her home on a government sponsored urbanized development called Hanna’s Lust, after qualifying for a 15-year mortgage from one of the financial institutions that took part in the program. The house is small but fully functional: 50 square meters, two bedrooms, a bathroom, a living room area with a kitchen sink, and water and sewage connections. These small yet functional homes provide much needed accessible low-cost housing.

This post is part of a blog series on development effectiveness featuring stories on learning and experiences from IDB projects and evaluations.

*Carolina Piedrafita has worked on projects of social and urban development in most of Latin American and the Caribbean, specifically in Argentina, Bolivia, Brazil, Colombia, Chile, Ecuador, Mexico, and Uruguay. Carolina currently leads projects of urban development and housing in Mexico and Suriname. Before joining the IDB she worked at the World Bank in the Division of infrastructure, finance and private sector in Latin America.