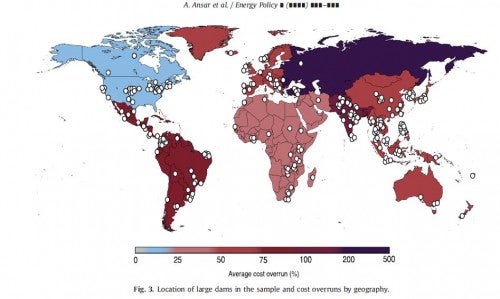 On this blog we have talked about cost benefit pitfalls and white elephants, speculated on how (not) to lie with it, but also and more boringly we have discussed discount rates, cognition, opportunity costs, and the costs of inaction, all hoping to go back to the future. The focus of most of the Cost Benefit literature is on the estimation of the benefits side of the Cost Benefit ledger.

As the economist noted recently this estimation is harder than you think. So hard in fact, that many economists think it is sometimes hopeless. Some object on the basis of ethical concerns on valuing benefits (Is the life of a worker in Bangladesh really less valuable than Donald Trump’s?). For others certain goods are what Musgrave called merit goods, and access to them should be universal.

So if benefits estimation can be in many cases an analytical stretch, what about costs? Much less effort – as far as I know – has been exerted on modeling the cost side, for either Cost Benefit or even Cost Effectiveness analysis.

So if benefits are hard to extract and might not be that credible, one can always count on a solid cost estimation.

It turns out that many cost estimates are everything but solid. A recent article (which. got. a. lot. of. publicity) on large dams was merciless on its criticism of cost estimates. Drawing from a sample of 245 dams built between 1934 and 2007 in 65 countries with a total estimated value of US$353 billion, the authors found that three out of four large dams suffered a cost overrun, the average cost overrun was 97% and the median was 27%. Costs estimates in the sample did not become more accurate over time and there was little learning from past mistakes.

The issue of cost overruns is not exclusive to large hydropower projects. It has also been documented in roads, urban transportation, information technology and water and sanitation among many others.

If it happens in the US (where a search of “overruns” in the GAO web site results in over 2,500 hits) , the UK, Canada, or Australia, it can happen anywhere in the world-

Why are costs persistently underestimated?

First, the existence of detailed cost estimates based on precise engineering studies can provide a false sense of control and generate delusion, overconfidence and provide grounds for deception. The evidence shows that experts (the engineers etc.) are too optimistic on costs, timing and benefits. They tend to take an “inside view” and ignore the history of similar projects in the past. In many projects, forecasts can provide a false sense of control given the detailed nature of engineering cost estimates.

As Kahneman (ungated) puts it:

Decision makers have a strong tendency to consider problems as unique. They isolate the current choice from future opportunities and neglect the statistics of the past in evaluating current plans.

In addition (ungated), many times project promoters have incentives to misrepresent costs, and agency issues affect decision making in a complex web of government agencies at various levels, consultants, contractors, tax payers and civil society in general. The weight of detailed and granular engineering cost reports can easily pulverize even the most unbelieving skeptic that questions cost estimates derived from scientific studies.

Second, it could be just bad luck. Stuff sometimes happens and black swans fly, as deliciously explained in Spanish by Xavier Sala-i-Martin.

And of course there are the megaprojects with their megacosts. In those cases one would have to add the idea that if you dig a big enough hole, there is no alternative but to find the equivalent of Jamaica’s GDP to fill it.

Maybe the solution is to follow Hirshman’s hiding hand: it is better not to know, or otherwise nothing would ever get built. Or not. Certainly not.

So, what can be done?

We will talk about that in a next entry.