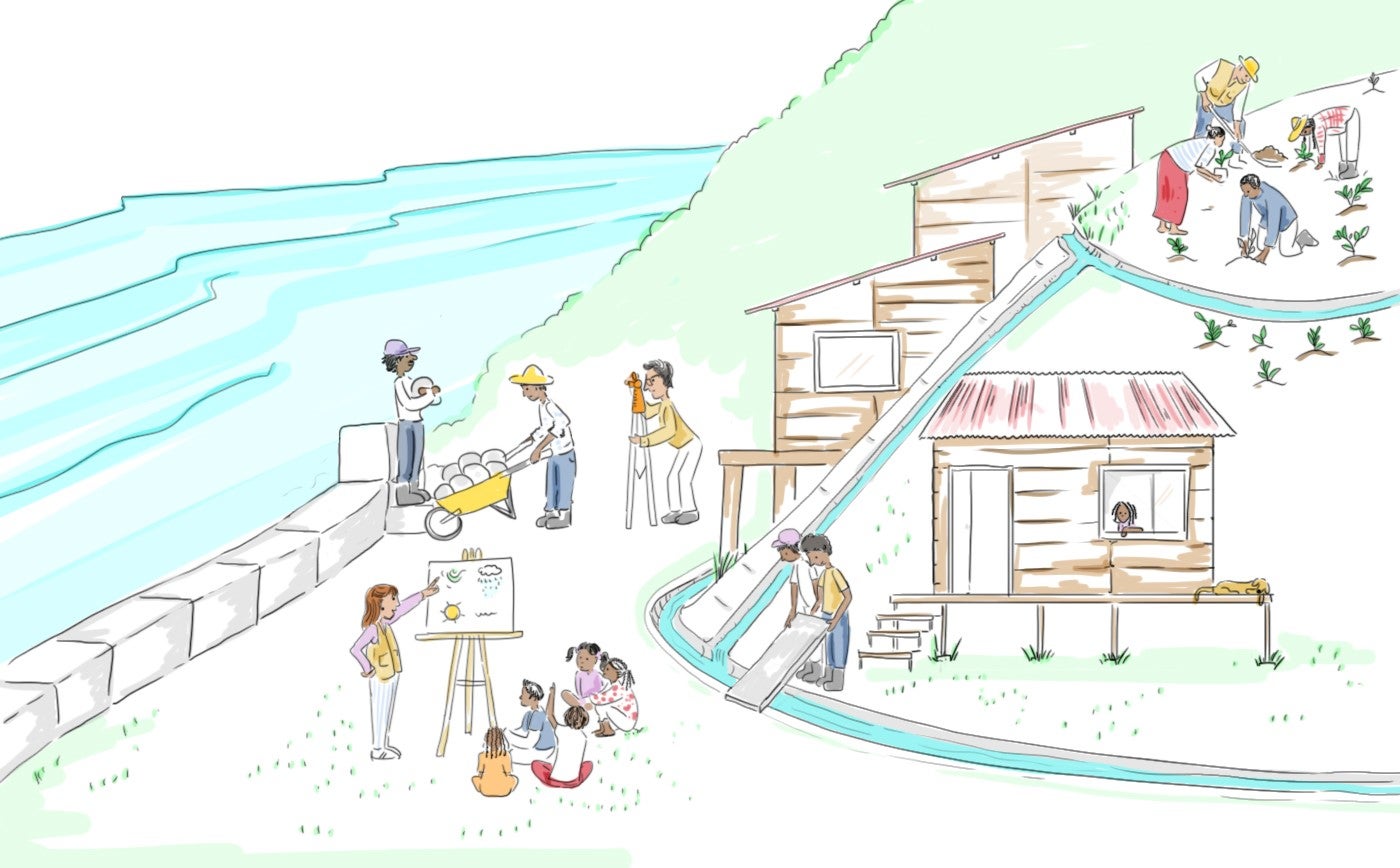 On October 30, 1998 Hurricane Mitch caused hundreds of rock and debris-filled landsides, brought about by the erosion of riverbanks in the most vulnerable neighborhoods on the outskirts of the cities of Tegucigalpa and Comayagüela.

The most devastating landslide originated below the hilltop of what is today called the Cerro El Berrinche. It was an event of biblical proportion, that destroyed hundreds of homes and generated the movement of 300 million cubic meters of terrain, that clogged the Choluteca River and resulted in flooding of the city for several weeks. Fortunately there was no loss of human life, but the Soto colony disappeared completely. The definitive solution did not come about until 2011, when, thanks to the Japan International Cooperation Agency (JICA), the risk reduction works to stabilize the slope were completed.

In reality, however, the works only addressed the unsafe conditions. The fragility of the terrain, informal occupation of land, precarious housing, overcrowding, and social fracturing that generated the disaster in the first place still persist today in Tegucigalpa and represent a high risk.

“Disaster risk prevention and reduction strategies based on public participation and the revitalization of neighborhoods have been particularly effective in reducing those risks.”

over a million square kilometers and a population of some 30 million, Central America historically has been subject to natural disasters that have had devastating consequences in the region. Since this past November, 7 million people suffered the ravages of Hurricanes Eta and Iota, in a region subject annually to floods, droughts, and landslides, as well as physical and social dislocations due to significant seismic and volcanic activity.

Natural disasters, extensive deforestation, destruction of river basins, high levels of environmental degradation, and the lack of specialized planning are factors that exacerbate the already alarming levels of poverty, inequality, and insecurity in a region also afflicted by the COVID-19 pandemic.

In recent decades, a lack of adequate urban planning and a flow of migrants fleeing rural areas to cities in search of opportunities, populated peripheral neighborhoods of the Central American capitals, that are already highly vulnerable to natural disasters and where there is limited access to basic services.

To support the Central American region in the management of risks associated with natural disasters in urban areas, the Inter-American Development Bank recently published a study with recommendations to reduce disaster risk conditions and to strengthen the response capacity in neighborhoods of the capitals of Guatemala, El Salvador, and Honduras.

Traditionally, disaster risk management at the local level was carried out with the support of regional and national authorities. However, recent experiences have shown that disaster risk prevention and reduction strategies based on public participation and the revitalization of neighborhoods have been particularly effective in reducing those risks.

When risk mitigation is not feasible, it is recommended to:

One of the greatest challenges is the lack of education among residents regarding the danger represented by having a house in high-risk areas. Therefore, a community response would be the most effective.

It is critical to involve the community in actions such as risk monitoring and the implementation of early warning systems, as well as the establishment and communication to the public of evacuation routes and safe zones. These efforts should be accompanied by periodic disaster response simulation exercises organized by community brigades that prioritize assistance to the populations most vulnerable to natural disasters.

The ideal, of course, is to prevent communities from getting to this point.

However, it is worth noting that not all risks can be mitigated. There are areas where it is not possible—for environmental or economic reasons—to implement protection measures.

In areas where risks can be mitigated, risk reduction programs can include strengthening housing and services infrastructure or environmental management measures, such as the adequate management of waste and wastewater.

In areas where risk mitigation is not viable, other actions can be taken. It is advisable to declare these areas uninhabitable, to program the resettlement of households, and involve the community in identifying and designating a practical use for these areas, by creating recreational areas or community gardens, in order to prevent their subsequent occupation.

These actions must be accompanied by monitoring and control mechanisms—coordinated among central and local governments as well as the community—in order to prevent the arrival of new families, the establishment of businesses with inadequate security measures, or environmental degradation.

“Central and municipal governments must put in place programs that facilitate access to land and secure housing for families with scant resources.”

To prevent the generation of new disaster risks, a development strategy in an informal settlement with at-risk areas should involve the community in order to take into account the needs of the population as well as the social-environmental potential and territorial limits. The size of a building, the location of a business, or the expansion of a home are important factors that can mitigate risks in the event of a disaster.

However, to solve the problem in the long-term, it is urgent to analyze how terrain located in high-risk areas is sold without property titles to low-income persons, putting them at risk of losing all of their assets in the event of a disaster, without any possibility of receiving financial compensation.

Both central and municipal governments must put in place programs that facilitate access to land and secure housing for families with scant resources, put an end to speculation, and prevent the occupation of areas that should be declared inhabitable.

Not doing so is allowing the risk to grow exponentially, generating greater disasters and higher reconstruction costs. In this context, the IDB study recommends that, to avoid future disasters, it is critical to address the social conditions at the root cause of these risks. What would an intervention with such an approach look like if we could travel back in time to avoid the Berrinche disaster?

To learn more about the mitigation of risks from natural disasters, consult the IDB report here.

Sandra Bartels is a Lead Sector Specialist in the Office of Strategic Planning and Development Effectiveness.