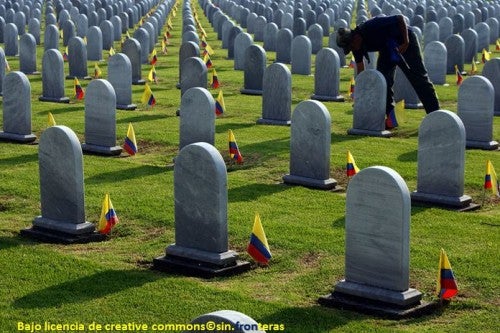 The Colombian armed conflict has generated a considerable amount of evidence based research. So much so that many have started to refer to it as “violence-metrics”.

This literature can be grouped in three categories: descriptive studies that show how the conflict has evolved both geographically and chronologically; studies that look into its causes, and third, research that focuses on the costs of the conflict.

Among the descriptive studies Granada, Vargas and Restrepo analyze the conflict looking at its evolution over time. They identify three stages: territorial expansion (1990-1996), flare-up (1996-2002) y re-arrangement (2003-2008).

Botero and Sánchez look into the geographic and time dynamics in armed actions, combats, and political homicides, and according to their incidence, classify local municipalities.

In both Ávila (2010) and Ávila and Valencia (2011) we find an analysis of the specific dynamics for the Revolutionary Armed Forces of Colombia (FARC); in Núñez (2001) we find that information for the National Liberation Army (ELN); for “self-defense” groups we find it in Duncan (2005); and in Restrepo and Aponte (2011) we can find the neo-paramilitary information.

According to these studies, the Colombian armed conflict is nation-wide in nature, depending of the specific group strategies. According to Ávila, by 2010 almost 600 out of 1101 municipalities had some illegal armed activity.

With respect to the FARC this study suggests that they maintain their military capacity, have withdrawn to their rear and have instituted a process of troop professionalization, increasing sharpshooter and explosive activity in order to avoid direct combat.

On the other hand, the ELN reorganized in smaller structures and set up support networks, which allowed it to advance in frontier areas.

Finally, although the negotiation process with self-proclaimed Autodefensas Unidas de Colombia (paramilitary self-defense groups) allowed for the de-mobilization and disarming of approximately 30 thousand of its members, the paramilitary phenomena is still active, starting a new phase (called “neo-paramiliarism”) linked to drug trafficking and illegal exploitation of natural resources.

But, what does this literature say about the causes?

In terms of the causes, some authors contend that economic inequalities, social exclusion and discrimination are correlated with the armed conflict.

Although poverty and conflict have a complex relationship, one thing is clear: conflict affects the poor disproportionately. Galindo, Restrepo and Sánchez contend that poverty feeds the conflict as fewer opportunities lead them to take riskier conducts creating a poverty-conflict trap.

In parallel conflict can cause poverty as it destroys wealth.

The “cursed” resource considered both cause and result of the armed conflict is cocaine, as stressed by Díaz and Sánchez (2004) or Angrist and Kugler (2008). Vargas and Dube (2006) show that the curse is clear for the cases of oil and cocaine, but not for coffee.

Leiteritz, Nasi and Rettberg (2009) add gold, palm oil and bananas to the curse list, given their direct relation with armed activities. Idrobo, Mejia and Tribin (2002) show that, in the case of gold, illegal exploitation is responsible for the increase in violence in gold producing areas.

With respect to costs, the literature presents two kinds of studies: those that focus on economic estimates and those that look at social consequences. On the economic impact of violent conflict, various studies since the nineties have quantified its direct and indirect costs.

This cost is estimated at between 4 and 9 percent of GDP (see Alvarez and Rettberg, 2008, for an excellent literature review). Regarding entrepreneurial activity, Camacho and Rodríguez (2010) find that company survival is affected negatively by illegal armed activity.

With respect to agricultural activity, Muñoz (2011) found a negative relationship between the number of attacks and coffee production, where municipalities with higher attack rates, have production reduced by as much as 1.2%.

Acevedo (2009) states that the price paid to agricultural producers is lower in violent municipalities than in peaceful ones, using coca leafs as a case study.

Finally, the evidence from Fernández, Ibáñez and Peña (2011) suggests that when faced with violent shocks, rural households are forced to work in non-farm markets. Rural labor markets cannot absorb the excess supply, creating a vicious cycle.

Among the studies that focus on social topics, Sanchez and Rodríguez (2010) found that violent attacks increase school desertion for kids 6-17, for three reasons related to the conflict: economic shocks, lower life expectancy and lower education quality.

Armed conflict creates displacement, which is widely documented, and this affects women in particular as shown by Calderón and Ibáñez (2011). Calderón, Gálfaro and Ibáñez (2011) find that women suffer more domestic violence, which in turn is linked to increased violence towards kids, perpetuating the cycle of violence.

Without a shed of doubt, the availability of good quality micro-data will introduce incentives do undertake deeper and better studies that will complement those referenced here.

One must acknowledge, finally, that measuring many aspects of the conflict is challenging, as clearly presented by the work of Granada, Restrepo and Sánchez and by Espinosa.