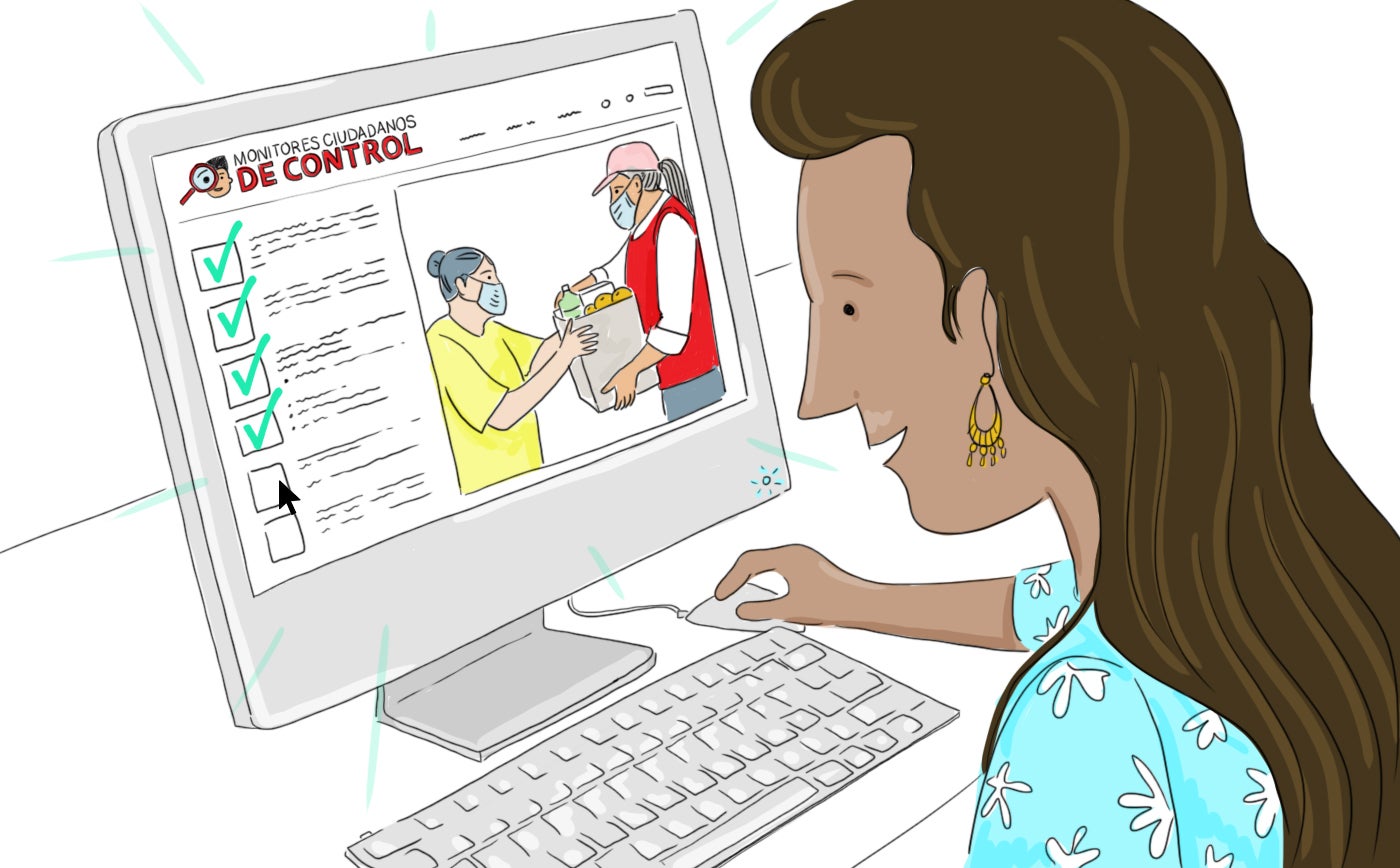 María Jiménez * is determined to put an end to corruption in Peru. The 26-year old economist monitors public works and files reports on irregularities. This can lead to complaints and penalties for construction firms that commit violations. María is participating in a monitoring program called Citizen Control Monitors, comprised of hundreds of volunteers who, like her, have passed competitive exams to become part of the government’s monitoring services.

The program is an anti-corruption initiative run by the Office of the Comptroller General of Peru (Contraloría General de la República del Perú – CGR) and backed by  the Inter-American Development Bank (IDB). The CGR is an autonomous entity of the Peruvian government in charge of monitoring the use of public resources. Through the Citizen Control Monitors program, the CGR supervises the country’s public works that have a budget of up to 10 million soles (approximately US$2.7 million).

“If a work is valued at 1 million, it actually costs less. The authorities call this ‘the famous 10 percent,’” explains María, who is aware of the high level of corruption within the construction sector in many countries in the region. In her numerous in-person visits to public works, she has witnessed many irregularities. She explains how cost overruns can be hidden in extra charges for lower-quality paint or cement. “If you use a gallon of paint that costs 25 soles instead of 42 soles, you are spending less than what you are billing,” she said.

In an evaluation of the monitoring program conducted by the IDB, we found that the monitoring visits reduced cost overruns by subcontracting construction firms by approximately 9 percentage points. This is the result of an effective strategy to reduce corruption through cost-effective monitoring.

The evaluation shows that this monitoring program can generate benefits for the State by helping to detect cases of corruption in the execution of public works, which is even more crucial now during the economic crisis resulting from the pandemic.

This innovative program promotes transparency and greater citizen participation in combating corruption.  María, who has learned to recognize the different ways cost overruns are charged, feels that her work is making a difference.

In addition, the Citizen Monitors Program promotes access to information platforms such as InfObras, which also strengthen transparency in the execution of public works. These portals allow citizens to follow up on different projects, and they have become a key tool to empower citizens and promote government accountability.

Social Monitoring and the Pandemic

The collaboration of citizen monitors has been key during the COVID-19 pandemic. Visits to works have been suspended, but remote monitoring strategies have been implemented to supervise the authorities’ response to the emergency, especially the delivery of basic goods needed by families affected by the crisis. María was part of the team of volunteers in her province that participated virtually in monitoring the State’s delivery of baskets of basic goods. The team reported several irregularities among the lists of beneficiaries. Thanks to the information generated by the monitors, reports were issued to alert public entities about adverse situations that warranted corrective action.

María thinks that for the program to reach its full potential, the law must be enforced. “But laws are quite  ambiguous in Peru, and that limits us at times,” she explains. Despite the challenges, María believes she is providing a service to society, and that the work being carried out not only makes a difference but makes her feel empowered as a citizen. In addition, the program gave her access to dozens of hours of training that helped her get her current job.

Now more than ever, promoting citizen monitoring programs is key to preventing corruption and ensuring the proper use of vital public resources in times of economic crisis. Programs like the one in Peru will play an essential role in keeping authorities accountable in our region during and after the crisis.

*María Jiménez is a pseudonym.

Do you want to learn more about this topic? This blog article might interest you: “Comprar con evidencia en tiempos de pandemia. Lecciones de Argentina. (“Evidence-based Purchasing in Times of Covid-19: Lessons from Argentina.”) You can also learn more about IDB efforts to promote data transparency.

Gastón Pierri holds a Ph.D. in Economics with a penchant for governance, tax reform, and digital technology. Economics Specialist in the Office of Strategic Planning and Development Effectiveness of the Inter-American Development Bank.