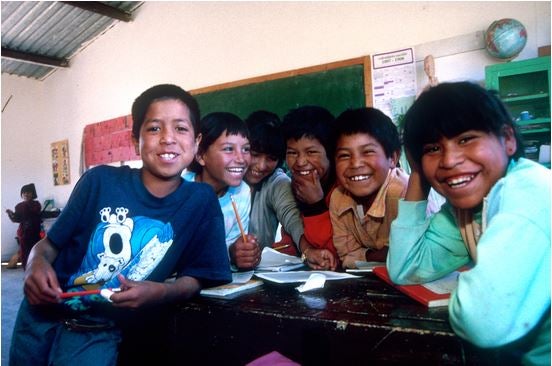 Evaluations of supply side educational interventions such as conditional cash transfers and private school vouchers have shown that such programs can be effective in increasing the demand for education in the developing world. In a new paper, we study a program that seeks to mitigate the costs of such transfer programs by supplementing donor funds with the remittances of international migrants.

In 2012, international remittance payments to developing countries were over $400 billion worldwide, and policymakers have long been interested in creating tools to maximize the development impact of these funds.

In our study, we find that households in El Salvador increased educational expenditures by a large amount when receiving remittances meant for education.Project design

In conjunction with the Fundación Empresarial para el Desarrollo Educativo (FEPADE) an educational foundation in El Salvador, and Viamericas, a money transfer company, we developed the EduRemesa. EduRemesa is a new financial tool that allowed migrants to direct remittances meant for education to high school and college students of their choosing in El Salvador through FEPADE, who issued an ATM card for the beneficiary student (not a parent or guardian) and deposited the EduRemesa funds in the student’s account in monthly installments throughout the school year.  Migrants chose the total amount to be transferred to the beneficiary student from a set number of discrete levels.

To test the extent to which donor funds for education can be effectively supplemented by these migrant remittances, we studied three different versions of the EduRemesa:

1) 3:1 match: every dollar sent by the migrant was matched by three project dollars

2) 1:1: match: every dollar sent by the migrant was matched by one project dollar

3) No match: the entire EduRemesa was funded by the migrant

Migrants were randomly allocated to receive an offer of one the three types of EduRemesa, or to a control group. Because the treatments were randomized, differences in outcomes between the four groups can be attributed to the different treatments they received.

Study participants were recruited at the Salvadoran consulates in the Washington, DC area. Migrants who chose to take up the EduRemesa did so by sending a remittance (via Viamericas) to FEPADE at the beginning of the school year, identifying the beneficiary student. Two thirds of the way through the school year we followed up with all study participants (migrants and their families in El Salvador) to measure the impact of the program. The Inter-American Development Bank funded the implementation and impact evaluation costs of the study.

The results show that, at least for female students, any concern that the EduRemesa funds would not be spent on education as intended are unfounded. In fact, the EduRemesa “crowded in” educational expenditures: households increased spending by far more than the amount of the transfer. This increase is even more striking when examining how the EduRemesa affected student labor force participation.

What is the economic explanation for such a large response to receipt of the EduRemesa funds?

One possibility is that students used the funds to pay for something that had a large lumpiness in costs. The EduRemesa alone was not enough to cover this cost, and therefore had to be supplemented with other funds. One expense with large lumpiness in costs is private schooling, whose costs are typically discretely larger than those of public schooling. Indeed, we find that female students in the 3:1 match group were 20 percentage points more likely to be attending private school than those in the control group (see Figure 3).

Figure 3: Student is in private school

The main result of our study is that households in El Salvador increased educational expenditures by a large amount when receiving the EduRemesa. In this study, $1 of donor funds generates additional funds amounting to $0.33 from the migrant and $3.62 from the beneficiary household. Although we cannot say exactly where the additional funds come from, we show that they do not come from increased remittances or by shifting educational expenditures away from other students in the household.

The results are limited to the specific context that we study in this paper, and it is not clear that every family would react in such a way when receiving an EduRemesa. In fact, the migrants may be playing an important role in screening. Because migrants choose the beneficiaries themselves, the funds end up going to the students who are most likely to want, for example, to switch to private school. Further research is needed to determine whether programs such as this can be similarly effective in identifying beneficiary students outside of this particular context.

* Kate Ambler recently completed her Ph.D. at the Department of Economics, University of Michigan (ambler@umich.edu). Starting August 2013 she will be a Post-Doctoral Fellow in the Markets, Trade, and Institutions Division, International Food Policy Research Institute (IFPRI). Follow @ambler_kate