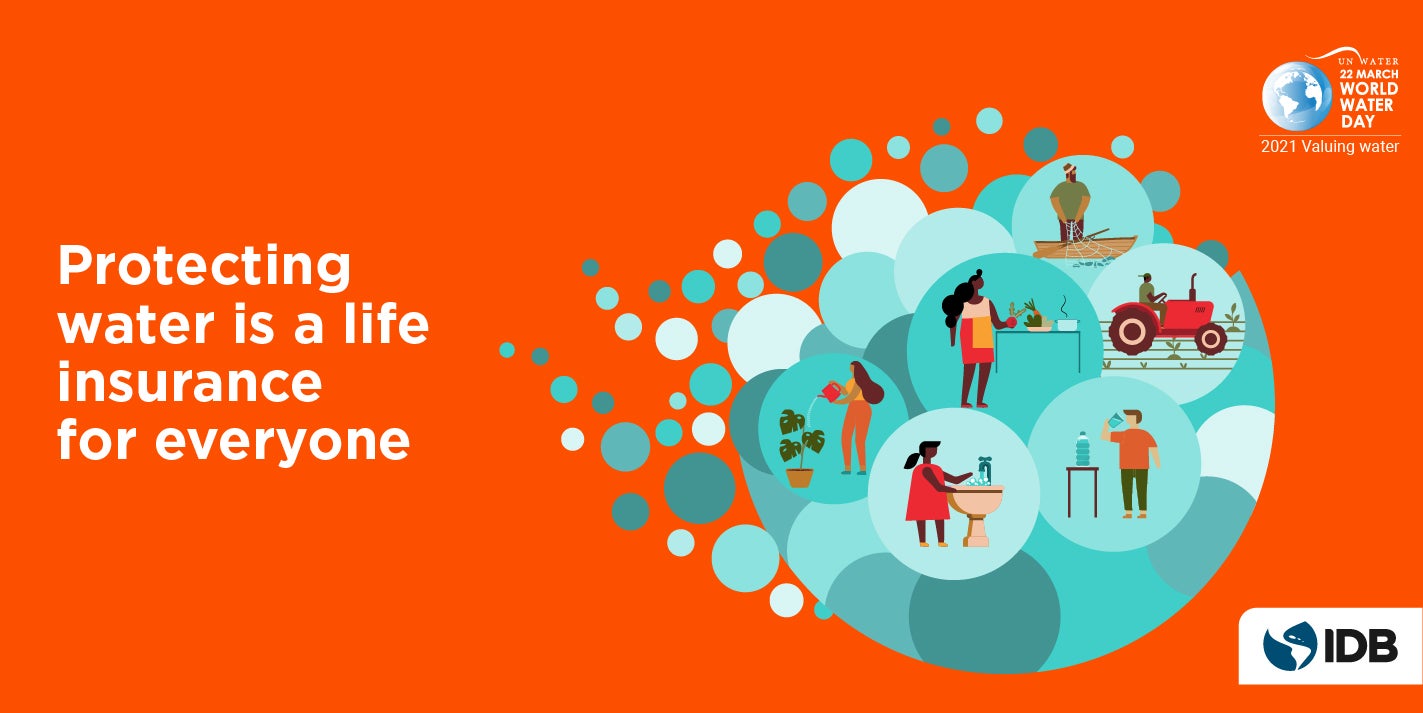 This month we celebrate World Water Day and the United Nations has invited us to reflect on an increasingly meaningful question: What is water worth to you? Most, if not all, people would agree that water is invaluable. After all, there’s a reason it’s called the “vital fluid.”

Sadly, we appear to be treating water as the exact opposite of that precept – and we’ve begun to pay the price too. We’ve been using water as if it were an unlimited resource. However, 77 million people still lack access to safe water in Latin America and the Caribbean, and over two thirds of the region’s population have an intermittent supply. How ironic that these same people possess the largest fresh water reserves per capita in the world.

Although we’ve made some progress – given that in 1960, only 33% of people had access to drinking water–, there is still a gap that will be hard to bridge unless we make changes.

First, because historic investments, under the paradigm of large costly infrastructure, are unsustainable. These investments have done little for development and have instead deepened inequality. In fact, people living in poverty in our region pay more for water than the middle or high classes, often having to buy from unreliable providers due to supply interruptions. This inequality is even more significant when it comes to sanitation. Eighteen million people still resort to open defecation, and 31% of the region’s households remain unconnected to the sewage system, creating a consistent threat to people’s health and a source of pollution that jeopardizes the integrity of our water sources.

Secondly, mismanagement of water resources and distortions caused by climate change have broken the abundance and scarcity cycles that are taken into consideration for water management. In fact, some of our most highly populated urban centers, such as Mexico City, Santiago, or Lima are constantly threatened by water stress.

This is why the answer to how much water is worth to us is of the essence, although we have yet to act accordingly.

However, we could bridge historic investment gaps while protecting ourselves from climate change by relying on new paradigms to respond to old problems, and by acknowledging that climate change is becoming an increasingly important and frequent threat.

Unpredictable events such as the COVID-19 pandemic, for which basic handwashing with soap and water is one of the first lines of defense, have shown us once again that we are not giving water the credit it deserves.

At the IDB, we support the development and innovation of tools to improve water resource management. Hydro-BID, for example, relies on satellite technology and specific water basin information to create present and future availability scenarios. Twenty countries across the region have already implemented this tool. Among them, Guyana and Suriname, will be able to rely on solid data to set up comprehensive water resource management plans and improve its flood and drought predictions.

We also work directly with operators through Aquarating, the only tool in the market capable of swiftly, reliably, and comprehensively displaying the situation of water and sanitation providers in every area. After a thorough assessment process, a baseline is established on which to develop a business transformation and improvement plan for the short, middle, and long term.

Protecting our watersheds has become now more than ever a form of defense against a climate change scenario that is quickly becoming true. We can tackle this threat while investing to overcome historic inequalities across the region. To do so, we must rely on new paradigms such as Optimal Sanitation, a program that aims at allocating nearly US$15 billion to developing sanitation infrastructure in the most vulnerable areas, with plans and designs adapted to every community, while at the same time protecting watersheds.

The post-pandemic recuperation stage presents us with a unique opportunity to not go back to normal. Or else, we won’t have learned the lesson. We have the chance to put our people back to work, with investments that take technology and management innovation into consideration. These could lead to more and better services that require fewer resources, while boosting climate change resilience.

We are still in time to truly give water the essential value it deserves – the one that has led us to call it a “vital liquid.”