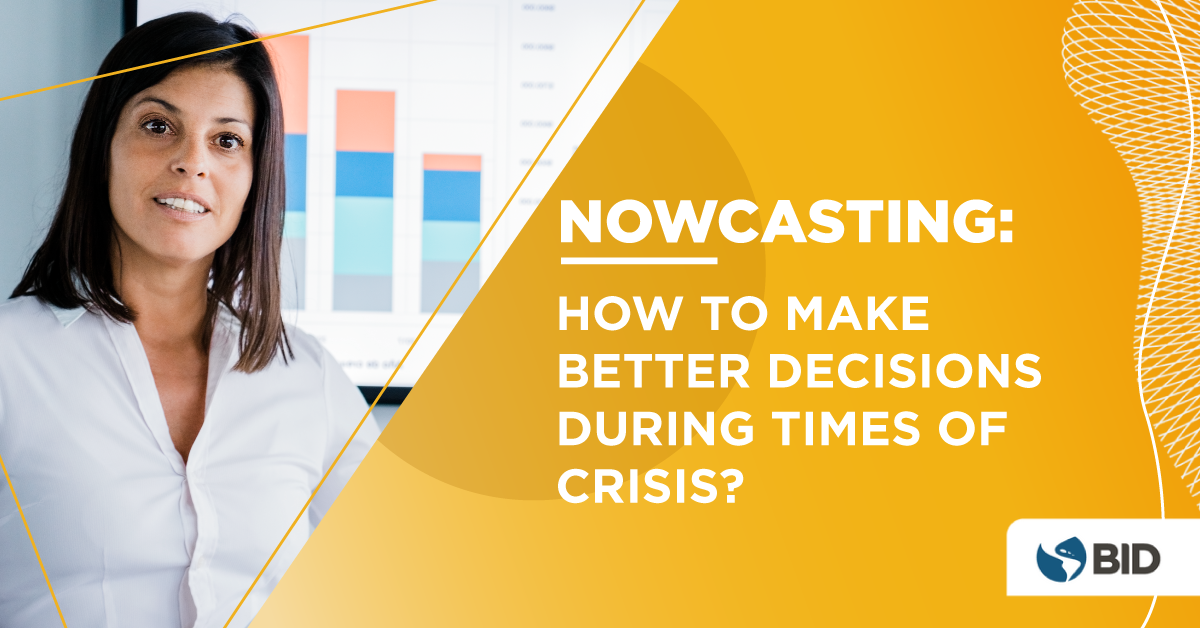 One of the most common questions in times of pandemic has been: how to cope with constant uncertainty? This is because uncertainty makes it difficult to plan our lives, to manage our finances, it makes harder to have future job prospects, and even creates mental health challenges. At the macroeconomic level, uncertainty hinders the decision-making process for governments, can delay investment decisions, and can cause spending cuts by households and companies as a precautionary measure.

In the face of a major economic uncertainty created by the pandemic, the ability to gather and interpret information quickly is crucial for decision makers, specifically when the crisis deepens or turns into a recovery. To this end, governments, central banks and leading institutions have increasingly added nowcasting models to their decision-making toolbox. The term nowcasting is a contraction of “now” and “forecasting”, which are combined to make explicit that the aim of this exercise is to forecast an economic variable that has not yet been published by using high-frequency data.

During past crisis, governments and stakeholders over relied on typical economic data – often subject to publication lags of up to three months – which exposed them to potential losses and risks. For instance, macroeconomic variables such as the quarterly Gross Domestic Product (GDP) are released with a lag of two to three months in most Latin American and Caribbean countries, which somewhat restricts the information available for short-term decision-making, as past information does not reflect current conditions – a suboptimal undertaking in circumstances of high volatility.

Nowcasting exercises make it possible to fill the gaps arising from the lag in the publication of macroeconomic indicators by exploiting the availability of other indicators which are semi or highly correlated with GDP that are published on a daily, weekly or monthly basis. This process allows to secure real-time signals of movements in GPD and produce an accurate forecast of the value of output between 60 and 90 days before its official publication.

Nowcasting into practice: the cases of Belize and El Salvador

Since the start of the pandemic, the Inter-American Development Bank (IDB) through the Country Department of Central America (CID), Haiti, Mexico, Panama and the Dominican Republic, has been working to develop tools that offer a clearer view of the economic outlook for the region. To that end, we have calibrated nowcasting models for all CID countries.  However, we chose Belize and El Salvador as pilot countries to test the effectiveness of these methods in two economies that, though similar in certain respects, also feature significant structural differences. For both countries, CID developed nowcasting models that use six different methods from the Machine Learning family to produce a narrow forecast range for quarterly GPD. The six methodologies are: Random Forest, Gradient Boosting Machine, Neural Networks, Lasso Regression, Ridge Regression and Elastic Net Regression.

The nowcasting models for Belize and El Salvador show high predictive power and a good fit compared to the official figures released by the authorities. Furthermore, the use of Machine Learning techniques allows for an improvement in the out-of-sample performance and better handling nonlinearities, as they are specifically designed to handle complex relationships between variables. These advantages make the models especially useful to forecast structural changes such as steep declines in GDP in economic crisis or rebounds in periods of recovery. This was observed in the last three quarters of 2020, where both economies experienced historical GDP falls, and the nowcasting models were able to capture the large reduction in GDP during these periods. For example, in the second quarter of 2020, our model predicted a 19.4% drop in El Salvador’s GDP and the official figure was -19.7%. Likewise, the model predicted a 23.0% contraction in Belize’s GPD, and the published figure was -23.9% (Later on, the Central Bank of Belize revised the figure to -27%).

Which countries are candidates for Nowcasting and how much data is needed?

A crucially important aspect of nowcasting exercises is the quantity and quality of information available to calibrate the models.  In general, the fit of the models is better for El Salvador than for Belize because in the latter case access to some variables with a strong association with quarterly GPD was lacking, such as production and energy consumption or monthly employment series, which were available for El Salvador. However, the solid predictive and fitting power of these models in Belize is encouraging for the use of this tool in economies with similar statistical constraints. Likewise, the results constitute an incentive to improve statistical capabilities and optimize forecasts.

One of the most enriching experiences during this exercise was the interaction and dialogue with the Central Bank of Belize, which actively participated during the calibration of the nowcasting models and could use them as an additional institutional forecasting tool. Because the calibration of nowcasting exercises is a dynamic process that is refined over time, the IDB trusts that this work will help support the ongoing efforts of the government and national statistical offices of CID countries in securing better economic forecasts to guide policy decisions.

Do you want to learn more about Nowcasting models?  Download our publication Nowcasting to predict Economic Activity in Real Time : The cases of Belize and El Salvador

Also, if you want to discover more about how the national stadistical offices work, download the ICS (Innovation for Citizen Services) publication on Statistical legal frameworks in Latin America: Realities, best practices and recommendations.

Welcome to the blog of the IDB's Division for Innovation in Citizen Services. This blog is a space to discuss solutions to improve governments in Latin America and the Caribbean in order to strengthen services to citizens and promote greater transparency. Join this conversation!