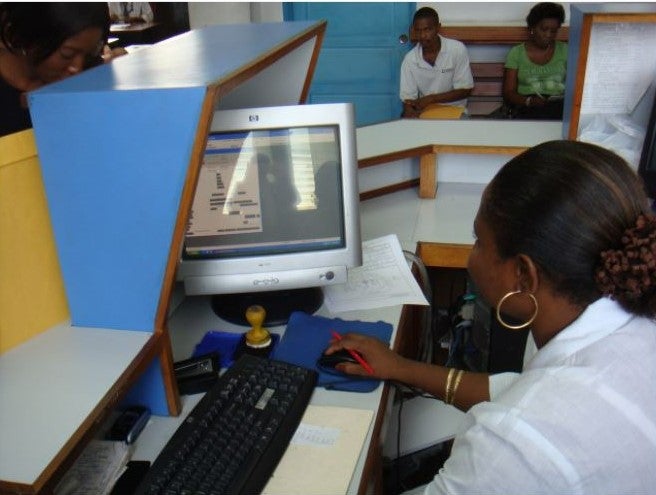 Digital transformation is no longer a choice. The pandemic has highlighted disparities among countries, including their ability to adapt public service delivery in response to the unforeseen shutdown of economic activities around the world and the increased needs for governmental support by citizens. At the heart of this lies a key lesson – digital transformation is no longer a choice but a must in the 21st century. This transformation requires not only investments in key infrastructure but also streamlining in processes, such as interagency coordination, capacity building of digital skills in the public sector and adaptation of the administrative culture.

Understanding the political economy of digitalizing public sector was the theme of the May 5th “Mercredi de Réflexion”, a monthly meeting organized by the Inter-American Development Bank (IDB) in Haiti. The periodic gatherings provide a platform for key actors in Haiti to discuss relevant topics contributing the country’s economic development. The virtual event, moderated by Mr. Kesner Pharel, had the following guest speakers: Mrs. Takady M. Konaté and M. Alejandro Glass from the IDB, Mr. Guy Serge Pompilus and Mr. Wilson Fièvre from the Haitian Institute of Statistics and Information (IHSI) and Mr. Donald Marcellin from the Ministry of Finance (MEF).

Haiti has a significant gap to fill in terms of digitalization

Digital transformation in the public sector is still at a nascent stage. According to the latest ranking of the United Nations Department of Economic and Social Affairs (UNDESA) on the digital maturity of governments, Haiti is the country with the lowest level of digitization of its public services in the Caribbean, ranking 180th out of 193 countries. Most public institutions are functioning without an IT master plan and with minimal guidance to ensure the required standardization for the implementation of a holistic digital agenda. There is a lack of interconnectivity between and within public entities, hindering the ability to provide online services to the population. In July 2020, the IHSI was named the strategic entity responsible for the coordination and implementation of the government’s digital agenda, a necessary step to ensure harmonization across public entities.

The existing legal framework has shortcomings. The current legal framework does not meet the vision and needs of the Government for a digitized public administration. The “Telecommunications Act” was first introduced in 1977 and is not aligned with the World Trade Organization (1997 Acts). The “Organic Law of CONATEL”, adopted in 1987, defined the governance and powers of the regulator. In 2017, the law on electronic communication and digital signature came into force; however, those legal instruments are not widely used as the government is still heavily dependent on traditional paper archiving system.

Sustainable sources of funding are still lacking. The Haitian authorities have increased efforts to digitalize the public sector. From 2004 to 2018, an integrated public finance management system was put in place at the MEF with support from USAID, facilitating the deployment of the SYSDEP, an accounting system for the management of public expenditures, across 40 public institutions. This system is currently being consolidated with the implementation of an Integrated Financial Management System financed by the World Bank. Since 2009, the IDB has been providing financial and technical support for the design and implementation of the GOH’s digital transformation. More initiatives have been supported by Canada with the digitalization of the entities responsible for tax (DGI) and duty (AGD) collections across the country. Unfortunately, those projects strongly depend on donor funding and no long-term financing opportunities have been included in the national budget. Moreover, the GOH has not been able to provide operating funds, negatively impacting the sustainability of public investments financed with external support.

A culture where the digital economy is still out of reach.  There are limited human resources with the necessary skill set to implement the digital agenda of the public sector.  This situation is worsened by low wages, making it unattractive for skilled IT professionals to become civil servants. In October 2020, the World Bank financed the Haiti Digital Acceleration project which partly focuses on improving digital literacy and developing the skills needed to spur productivity and innovation in a digital society. Such sustained efforts are needed for a cultural shift in the sector.

How can we make digital government a reality in Haiti?

1. Review the existing regulatory framework and underlying public structures. The current legal framework should be revised to establish a governance structure capable of defining the sector’s guideline for digitization. Simple solutions should be prioritized, using a gradual approach to implementation, reducing transaction costs, and facilitating interconnectivity of public entities.

2. Develop a clear national digital development strategy. The overall vision for the development of the country’s digital economy should be defined and shared with all stakeholders. This would allow interventions to be directed more effectively and efficiently. In Haiti, it is important to prioritize a systemic approach, ensuring that any components essential for an adequate uptake of these technologies are considered, including the adequate uptake of digital services amongst the population.

3. Secure sustainable financing. The process of digitalizing the public sector should be included in the national budget to ensure the financing of the design and implementation of the digital policy and to provide adequate resources to support the endeavor. It is important to make special provisions to support, at a minimum, operating costs such as wages, maintenance of existing system, and the replacement of obsolete equipment.

4. Define and implement a capacity-building plan on digitization. In 2019, the government launched, with the support of the IDB, a project to modernize the public administration, including the implementation of a HR Management System and the improvement of the quality of human resources management. The program provides an opportunity to improve digital literacy of civil servants, with the recruitment of specialists in data management, cyber security, and digital infrastructure as well as the development and implementation of a continuing education program. Such initiatives should be sustained and enhanced over the years.

During the COVID-19 crisis, digitalization has been a critical tool to maintain government’s operations so they can cover society’s needs. At the heart of this lies a key lesson – digital transformation is no longer a choice but a must in the 21st century. For Haiti, improving its digitalization is a critical point to set the basis for the country’s development.

Takady Mamadou Konaté is the Public Sector Management Specialist at the Inter-American Development Bank (IDB) Country Office in Haiti. She previously worked as Project Director for Management Systems International in Mali and DRC, as a Regional Technical Advisor for FHI 360 and a Finance Director for the Academy of Educational Development. Takady has experience in Asia, Africa, Latin America and the Caribbean in the area of public financial management, public administration reforms, capacity and civil society strengthening.

Stevens Simplus holds a master's degree in Development Economics and International Project Management from the University of Paris-Est Créteil (UPEC). He currently works as Operations Analyst at the Inter-American Development Bank (IDB) Country Office in Haiti. He previously worked as a statistical and economic Analyst for several Haitian private companies as well as national and international non-governmental organizations. In addition, he is a founding member and the Program Director of POLICITÉ, a non-governmental and non-partisan think-and-do tank based in Haiti that aims to stimulate the design and implementation of citizen-centered public development policies through research, publication, and dissemination of innovative policy proposals, targeting both the decision-makers and the whole citizens. His main areas of expertise are the following ones: public policy analysis and evaluation, fiscal policy, development economics, econometric analysis, and project management. GRacias! Mildred

Welcome to the blog of the IDB's Division for Innovation in Citizen Services. This blog is a space to discuss solutions to improve governments in Latin America and the Caribbean in order to strengthen services to citizens and promote greater transparency. Join this conversation!