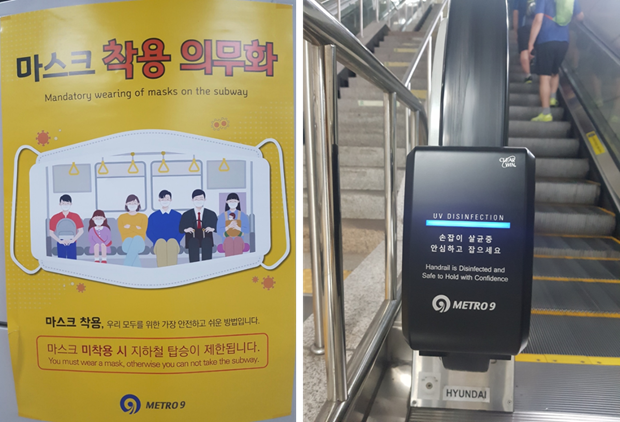 Until the beginning of March, South Korea had the second-most cases of Covid-19; now, the number of daily new cases is down to 30-50 people[1]. With the decreasing trend of new cases, the Korean government eased Social Distancing to Distancing in Daily Life since the middle of May, which includes the benefits of going back to school and allowing more social activities.

When every aspect of daily life is going back to normal, but still under the high risk of an outbreak, how can we manage public transportation to secure passengers’ safety against the pandemic? Here we will see the case of Seoul, a metropolitan city that hosts nearly 10 million people.

According to Seoul statistics, public transit is responsible for 65% of average daily traffic of 32 million trips in the city – 40% corresponds to the metro system and 25% to the bus system[2]. The Seoul metro system comprises of 22 metro lines in 746 stations connecting the whole metropolitan area of Seoul and the Gyeonggi province, where many people regularly commute to Seoul. Also, in Seoul city alone, around 7,400 buses service approximately 5 million daily passengers.

After the spike of Covid19 and the Social Distancing, the number of total passengers in the public transport system drastically decreased by almost 30%, compared to January 2020. However, since the restrictions started progressively to become gentler, it is estimated that by June, both the number of passengers as well as the congestion rate are going to recover up to similar before-pandemic level[3].

Distancing in Daily Life – How public transportation is being managed in Seoul?

In this context, going back to normal life is by no means an easy task and the government should come up with the strategies, tactics and/or good practices on how the risk of outbreak driven by public transportation can be reduced.

In the case of Metro, Seoul Metro established a guideline for managing the congestion level to control the certain physical distance between passengers and reduce the risk of outbreak. The following table shows the details of the guideline depending on the level of congestions:

From the congested level 1 (over 150%), more definite restriction of  “obligatorily” wearing a mask in the metro trains is required to secure the passengers’ health. During rush hours, some metro lines of high congestion level will have additional schedules. When deemed necessary, supplemental metro trains run once the congestion level gets over a certain higher threshold.

Especially the Metro Line 2, which has the highest congestion levels in commuting time in Seoul, will have 12 ATOs (i.e., Auto Train Operations) that can be operated with less time interval to manage the crowding level. The ATO system is an operational safety enhancement device used to help automate the operation of trains with regular time schedules and maintain the velocity that can have less interval time. When congestion reaches level 2 (over 170%), the guides may act controlling the passengers to limit the access. Besides, some of the metro trains would non-stop at the stations depending on the decision made by station officers/controllers/train operators.

Also, pre-notification system on congestions is set-up for the passengers to self-distribute in the use of the metro. Passengers can download the app or visit the website of Seoul Metro. They can acquire information of congestions by the hour, stations, metro lines, and the estimated weekly and daily congestion levels.

Live updates of the congestion level show up in Bus Information Terminal (BIT) installed in the bus stops. Or the passengers can check it out through the app. It will monitor and analyze the trend of bus passengers. This way, the extra buses can be offered to balance the congestions level.

Seonhwa Lee works at the Transport division of the IDB for the operations and research especially in Korea-LAC collaborative operations, rural transport, inclusive mobility and accessibility as well as the application of future technologies and innovations in transport sector. Before joining the IDB, she started her professional experience at the infrastructure unit of the Economic Commission for Latin America and the Caribbean (ECLAC). Also, she has project and research experiences in two Colombian projects, one in an urban-social development project implemented by KOICA, and the other one in the research project of sustainable agricultural system targeting forest conservation and peacebuilding in Colombia at Leibniz Centre for Agricultural Landscape Research (ZALF) in Germany. She graduated with a Bachelor of Economics in Korea and Master of Rural Development in Belgium and Germany.