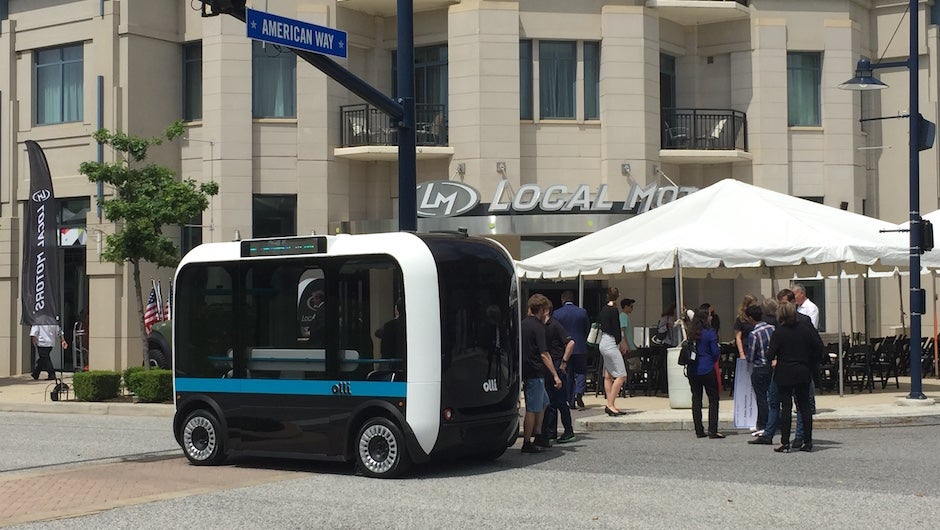 We are standing in front of a small electric autonomous shuttle. Instead of a steering wheel, pedals and a driver, it has screens that show information about the climate, destinations and nearby places. An autonomous vehicle with 6 LiDARs, 2 radars and 4 cameras instead of rear-view mirrors. This transport system uses machine learning algorithms that run on a high-performance computer hardware, and that is guided by a high-precision GPS and a high-definition digital map. But, perhaps most impressive, is that this means of transport is not manufactured from steel but 3D-printed using a resistant polymer, which enables the transformation of the manufacturing industry by having an effect in costs, risks, and more.

All these technologies are found in Olli, an autonomous shuttle from Local Motors that operates on the public streets in National Harbor, Maryland as well as in Berlin, Copenhagen and the University of Buffalo. We went to meet Olli as part of IDB’s Transportation Division digitalization agenda.

Along the route we see several signs warning: “Autonomous Vehicle”, and contrary to what we thought, the drivers of other vehicles and pedestrians that circulate in that area do not stop to take photos: in a few months they have already become accustomed to Olli’s presence in the streets.

When we boarded Olli, the operator who accompanied us during the trip explained that, although Olli is perfectly capable of operating without any human intervention, local regulations require that a human who can actuate an emergency brake should always be on board.

The journey begins at a slow speed, barely 15 miles/hr.

We arrive at a “4-way stop”, and Olli, like any human driver, stops and waits for the vehicle, which reached the same intersection just a few tenths of second before, to proceed. But the other vehicle appears to think that Olli arrived first and does not start. Olli advances an inch, and stops again, the other car does too. Again, it advances an inch and stops, until, Olli and the other car (led by a human) seem to arrive at a kind of agreement in which Olli crosses first.

This type of behavior, typical of human drivers is called “inche-ing”, and although it is natural for us who drive, almost innate, for a robot it is really complicated, but Olli does it very naturally.

Is this the future of transportation? What implications does it bring?

Most importantly, what is required for us to see it in Latin America and the Caribbean (LAC)?

The first step begins in how Olli is born.

Olli is the product of years of effort and experimentation by Local Motors, with an inclusive business model, to co-create products. This way of working began with a challenge of scarcity of funds in Local Motors, which forced the company to create its first car through crowdsourcing; this ended with the Urban Mobility Challenge in Berlin, which had the intention of creating a mass transit service without emissions, which won the winning proposal of Olli from a co-creator of Local Motors (Olli’s co-creators represent a network of more than 20,000 designers).

The potential of Local Motors is due to a disruptive vision, which draws on strategic alliances with technology and engineering companies. This is possible to promote in the LAC region. LAC must find ways to promote these innovative modes of transport and, at the same time, open space for small experiments with high potential.

With this, cities and countries of the region can learn from new technologies, know their social, environmental and technical implications, and be prepared to carry out the necessary reforms in their legal and regulatory frameworks. It’s a big and unclear challenge, but those who are at the forefront of these products will be able to absorb the innumerable benefits of this disruption.