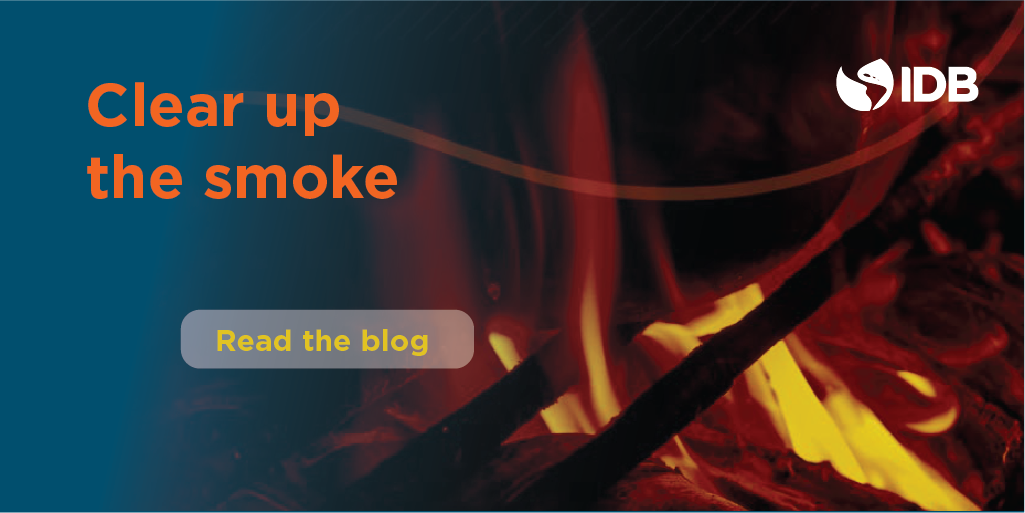 There is an urgent need in Latin America and the Caribbean (LAC) to cut down black carbon emissions. In 2012, one fifth of the 4.3 million deaths in the world related to the use of solid fuels for cooking or heating, either caused by health issues or accidents, were in LAC. Estimates show that if no action is taken to improve air quality, annual premature mortality from PM2.5- the particulate released from black carbon emissions- is expected to almost double by 2050.

In the region, one of the major sources of air pollution comes from residential cooking and heating, preceded by transport and industry. While not being the first source of emissions, it is the one that impacts the health of LAC citizens the most. The use of fuel wood, from which PM2.5 emanate, is primarily found in rural and peri-urban areas and concentrated mainly in Central American countries. Its particular harm to health and safety in the household, especially respiratory-related health, is due to the breathing of toxic pollutants, the higher likelihood of fire accidents and the burns caused by its use. In spite of the known harmful effects of the use of fuel wood, as of 2017, 90 million people in LAC still relied on solid fuels for cooking, accounting for roughly 15% of the region’s population.

In view of the urgent need for a transition to clean cooking, a recent publication by the IDB took a closer look at the problem of cooking with dirty fuels in LAC (i.e. wood, coal, and other high-emission fuels)  to identify which segments of the population clean cooking programs should target, what impact these programs could have in terms of improving health, and what the barriers in the per- and post-adoption phases of these programs were. The study focuses on three countries; Ecuador, Peru, and Guatemala, thanks to available data from all three and the possibility to carry out fieldwork in the latter.

Who are the most vulnerable?

The study found that the most affected by cooking with dirty fuels are usually the more vulnerable households, those that have a lower income, are located in rural areas and are less educated. In most cases, clean cooking policies are focalized policies. These household characteristics are very closely intertwined with informational barriers linked to the lack of access to media or information that comes with geographical isolation. In some cases, that isolation prevents access to basic electricity, which in turn prevents households from gaining information that would foster this transition. However, having communal information on the benefits that clean cooking can trigger coming from a respected rural community leader or neighbor can considerably influence the choice of the household to transition. This is one of the observations made during the fieldwork in rural Guatemala.

Findings also show that a household head who is older and female increases the likelihood of clean cooking adoption. This means that a quick transition to clean cooking can already be made amongst households led by women or older heads. These are also the population groups that are the most exposed to the adverse health effects of the use of fuelwood, as they are the ones who usually stay at home and/or cook, along with children,  who due to their lower height are more exposed to the smoke emanating from the stove.

In fact, in terms of adverse health effects, calibrated results from the study show that the potential successful implementation of the clean cooking program NAMA in Guatemala with 80% of adoption amongst 250,000 homes could reduce by 18% the number of deaths linked to acute lower respiratory infection amongst the 0-4 years old, and by 25% the number of years of life lost due to lung cancer amongst adults. These numbers send a strong policy message on the urgency to address these challenges.

With respect to barriers that take place before and after adoption of a clean stove, we take a look at a process known as attrition, when households initially adopt it and then drop out. This process can diminish the success of interventions on the field, therefore making it a relevant issue to address. Only those stoves that are long-lasting and supported by the user are well-suited for implementation. Failure to integrate user training and its preferences in the stove technology into the model decision-making process can cause users to revert to their old stove or method of cooking. In addition, the lack of access to basic needs, such as access to water, energy and transport, as well as to finance, matter and can be detrimental to the success of clean cooking adoption. These conditions of access are relevant to cover clean cooking stove repair and maintenance, or access to alternative fuel, such as GLP, at competitive costs. This is particularly true for places where in comparison wood is easily accessible and sometimes free (though recently illegal wood ‘markets’ have started to emerge).

Finally, culture and tradition matter. The secondary uses that a household gets from the stove are not automatically considered. Some households prefer their open pit fire for heating purposes, for the smoky flavor it gives their food, for the daily use of clay pots, or simply as an insect repellent. However, this is highly contextual to the location of the program. In the fieldwork in Guatemala, the open pit fire had the opposite effect of attracting flies due to the exposition of meat, whereas the clean cooking stove that could be used inside reduced the presence of such flies. Here, findings vary greatly by case study, which supports the idea that there is not a ‘one-size-fits-all’ program, and that each of these should be tailored according to the demographics and needs of the country, region or community.

Several policy steps can be taken in order to promote clean cooking programs and the effectiveness of their implementation. In addition to overcoming pre- and post-adoption barriers, and to tailoring programs according to the population’s needs, other steps include the provision of a regulatory framework that would incentivize manufacturers to improve the quality, reliability and durability of the improved cooking stoves. This is relevant in as much as one obstacle found in the post-adoption phase was the lack of guarantee or lack of assistance in the maintenance of the improved cooking stove, which would deteriorate over the years and hence lose its purpose. In terms of pre-adoption policies, norms, laboratory certification and field tests are necessary instruments to ensure that the quality of the stove matches the theoretical results of its applied use.

The need for implementation of clean cooking programs and the campaigning of their benefits is urgent and converges with the race against climate change and global warming. Clean cooking intervention tackles both objectives of diminishing high particulate matter and polluting emission, as well as preventing deadly diseases and illnesses amongst the most vulnerable populations at its source. It also has the advantage of preventing household accidents. Other benefits it brings that are less obvious are tackling deforestation caused by wood collection in some regions, and empowering women through more efficient cooking that allows for the reallocation of free time towards other activities that could potentially be a source of income.