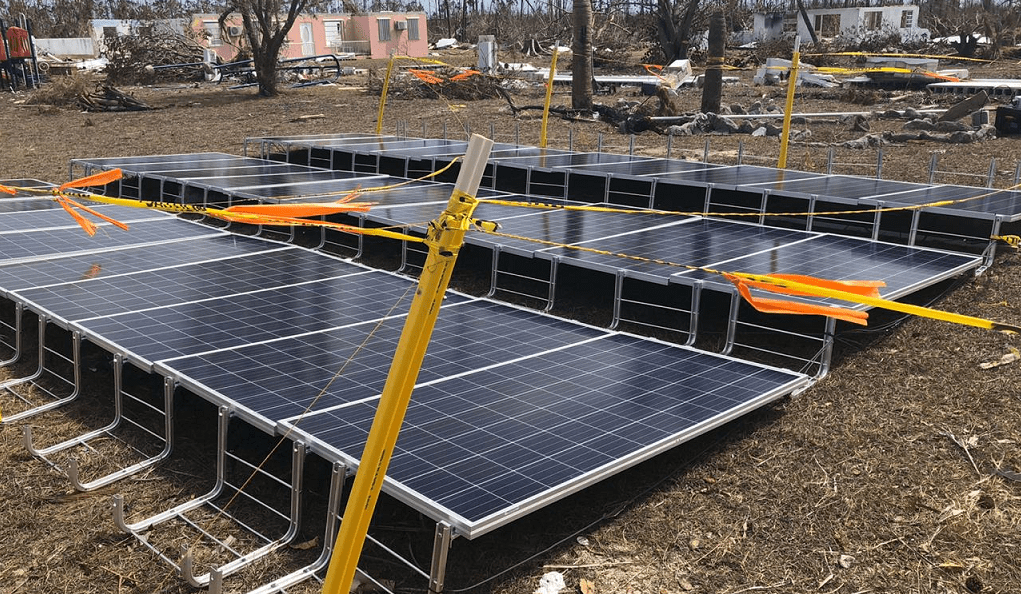 Climate change mitigation, adaptation and finance couldn’t be more pressing in Latin America and the Caribbean. In late November, the United Nations released the 10th edition of its Emissions Gap Report, which paints a bleak picture as it outlines the disparity between “where we are likely to be and where we need to be” in meeting out greenhouse gas emissions reduction targets.

The message from the UN is clear: signatories to the Paris Climate Agreement have failed to stop the growth in global greenhouse gas emissions, which means even greater and faster cuts are now necessary to limit rising temperatures to less than 2 degrees above pre-industrial levels and avert environmental and economic catastrophe in the years ahead.

On 15 December, the COP25 UN Climate Change Summit concluded in Madrid amid deep divisions between countries most vulnerable to warming temperatures and those emitting most greenhouse gases. The EU’s commitment to carbon neutrality by 2050 was the most substantive outcome from the latest round of climate talks, and an example others need to follow. Unfortunately, the largest emitters are resisting calls to take action. Regions like the Caribbean that bear the brunt of the impacts of climate change need to continue leading the charge by setting the right example and advocating for survival.

Time to take action! The opportunity to revolutionize the way we produce and consume energy

Notwithstanding the grim outlook for the planet, and especially for small-island developing states and densely populated coastal regions, there are signs of hope. Climate change has become the major political issue in many countries, and young people, especially, are voicing their commitment to a change of course. At the same time, clean technologies that enable a transformation of the energy sector are more accessible than ever, and financing is widely available from multilateral financial institutions and even commercial banks, both eager to lend in an environment of high liquidity and low interest rates.

We need to seize the opportunity to revolutionize the way we produce and consume energy and put this money to work quickly. It’s not just an existential imperative to take action; it also makes economic sense. The investments needed to make the energy sector in the Caribbean more efficient and less dependent on fossil fuels creates jobs, spurs economic growth and improves the trade balance for countries in the region, the vast majority net importers of energy and goods.

The modular nature of renewable energy systems supports a trend towards distributed generation, whereby centralized, vertically integrated utilities are making way for an increasing number of independent power producers and the large commercial and industrial consumers generating their own power to meet their needs. For small businesses and homeowners, grid-tied renewable energy systems are the most affordable way to reduce energy bills once efficiency measures have been adopted, and where feed-in tariffs are offered, the payback period on solar installations is drastically reduced.

More resilient grids for the Caribbean

The commissioning of the largest hybrid energy storage system (HESS) in the Caribbean by Jamaica Public Service (JPS) in mid-December bodes well for the region and demonstrates the utility’s acknowledgement of and support for this new paradigm in which it must put a growing emphasis on facilitating distributed generation by strengthening its transmission and distribution network. This is an important technical step towards building a more resilient electricity matrix in Jamaica, and one that will pay dividends in the coming years as the country’s renewable energy sector continues to develop. The development of the renewable energy segment in the Caribbean is key to climate change mitigation as the most effective way to reduce greenhouse gas emissions, but it’s also the best way to build more resilient grids, given that distributed assets are less likely to all be impacted by the same extreme weather event.

When Hurricane Dorian struck The Bahamas on September 1st 2019, it dumped 36 inches of rain in under 72 hours and decimated the Abaco Islands and East Grand Bahama with winds blasting up to 185 MPH and sea swells that exceeded 20 feet. It was the worst natural disaster in the country’s history, killing more than sixty, leaving tens of thousands homeless and causing an estimated USD 3.8bn in damage, representing nearly 1% of GDP. Months later, hundreds were still unaccounted for.

The mark of disasters due to hurricanes in the Caribbean

In the immediate aftermath of the storm, rescue workers searched for bodies and relief workers delivered water and food to a desperate population, while the destruction of homes, businesses and critical infrastructure was assessed with horror. Governments of the Caribbean once again responded with solidarity, sending reconnaissance and security teams, drinking water, food and temporary shelters for the immediate stabilization of a population still in shock. Over 90% of the buildings in Marsh Harbour and East Grand Bahama were destroyed. Water, transport and power infrastructure was obliterated. Hurricane Dorian had left its indelible mark.

In 2017, the costliest hurricane season on record, it was Harvey, Irma and Maria. Governments of the Caribbean can’t afford to wait for disasters like this to strike to take action on climate change. Despite a robust effort from neighboring countries and multilateral financial institutions like the IDB to provide funds and logistical support for relief, recovery and reconstruction, the lives of thousands of inhabitants of Grand Bahama and the Abacos will be disrupted for years, with a long road ahead to restore basic services.

Attempting to incorporate elements of resilience amid hasty rapid response efforts is challenging and inefficient at best. The vitally important exercise of assessing risks, reinforcing critical infrastructure and preparing for the inevitable is best approached when seas are calm, skies are clear and funding is readily available. The time is now.

The increasing frequency and severity of catastrophic hurricanes in the Caribbean makes the region an apt, albeit involuntary, laboratory for climate change mitigation and adaptation measures. Building resiliency in the region will require a comprehensive strategy that layers contingency planning on a robust infrastructure development plan and innovative financing from governments, multilaterals, the private sector and citizens themselves.

According the World Bank, which released its Lifelines: The Resilient Infrastructure Opportunity report in July, building resiliency into new infrastructure projects costs as little as 3% more. Castalia Advisors estimates resilient energy infrastructure in the Caribbean will cost as much as 30% more, depending on the type of asset, but in either case, the cost of relief and rebuilding after a major hurricane typically dwarfs the additional expense. This makes resilient infrastructure a good long-term investment, and investors of all kinds are demonstrating appetite for the stable returns and impact these assets represent.

IDB will support The Bahamas to diversify its energy matrix

When Dorian hit this past September, the Inter-American Development Bank (IDB) had been finalizing plans to support the Government of the Bahamas and the state-owned electric utility, Bahamas Power and Light (BPL), with a USD 170m Conditional Credit Line for Investment Projects (CCLIP). The CCLIP loan was designed to help diversify the country’s energy matrix, lower electricity rates and improve energy security on the heels of a grant-funded technical cooperation that laid the foundation for a massive deployment of solar photovoltaic (PV) technology in New Providence and the Family Islands, including the Abacos.

The execution of these plans is now more critical than ever, underpinned by the urgent need for resilient reconstruction in areas hardest hit by Hurricane Dorian. The Bahamas faces several challenges common in the Caribbean as it seeks to diversify its energy mix, as well as the unique technical challenge of providing power across a vast archipelago where demand for electricity on any one island is often insufficient to make conventional models economical.

The need for affordable, modular, highly resilient energy solutions that rely to the greatest extent possible on indigenous solar and wind resources can make The Bahamas a regional epicenter for innovative hybrid micro grids. The challenge of delivering state-of-the art energy solutions while lowering high electricity costs that have plagued The Bahamas and other oil-dependent territories of the Caribbean can only be overcome through innovative financing that engages and benefits the same consumers these infrastructure improvements aim to serve.

Community solar projects are one vehicle contemplated in The Bahamas following a model that’s been gaining steam across the US, where electricity rates are much lower than in the Caribbean. Community renewable projects can work here too, but governments need to modernize their laws and regulations to facilitate innovative financing structures that can offer more affordable, clean and reliable power to those least able to cover the high upfront costs.

The IDB brings a wealth of experience and technical expertise from Across Latin America and the Caribbean to analyze risks, prepare for natural disasters, establish contingent financing and invest in resilient critical infrastructure. Thanks to the advances in renewable energy technology, energy security is within reach. Resilient low-carbon energy infrastructure is a key component in the creation of the world’s first Climate Smart Zone in the Caribbean. It’s time we put our heads and money together to make this region the greatest example, advocate and beneficiary of climate action. Let us make this our mantra and bring it to Glasgow with demonstrable results in November 2020 COP26.

Dr Malaika Masson is a Senior Regional Energy Specialist at the Inter-American Development Bank (IDB). She brings 15 years of experience bridging governance and institutional policy with transformative investments in the energy sector. She currently manages the IDB energy portfolios for Jamaica and Bahamas, focusing on integrated resource planning, investments in renewable energy and energy efficiency and alternative fuels for transport. Prior to joining the IDB, Malaika worked for 9 years on public private partnerships and extractive industry governance within the UK Government, Chatham House, and Shell Group and served on public boards. Malaika received a Ph.D. in 2003 in Management Studies from Cambridge Judge Business School, Cambridge University.