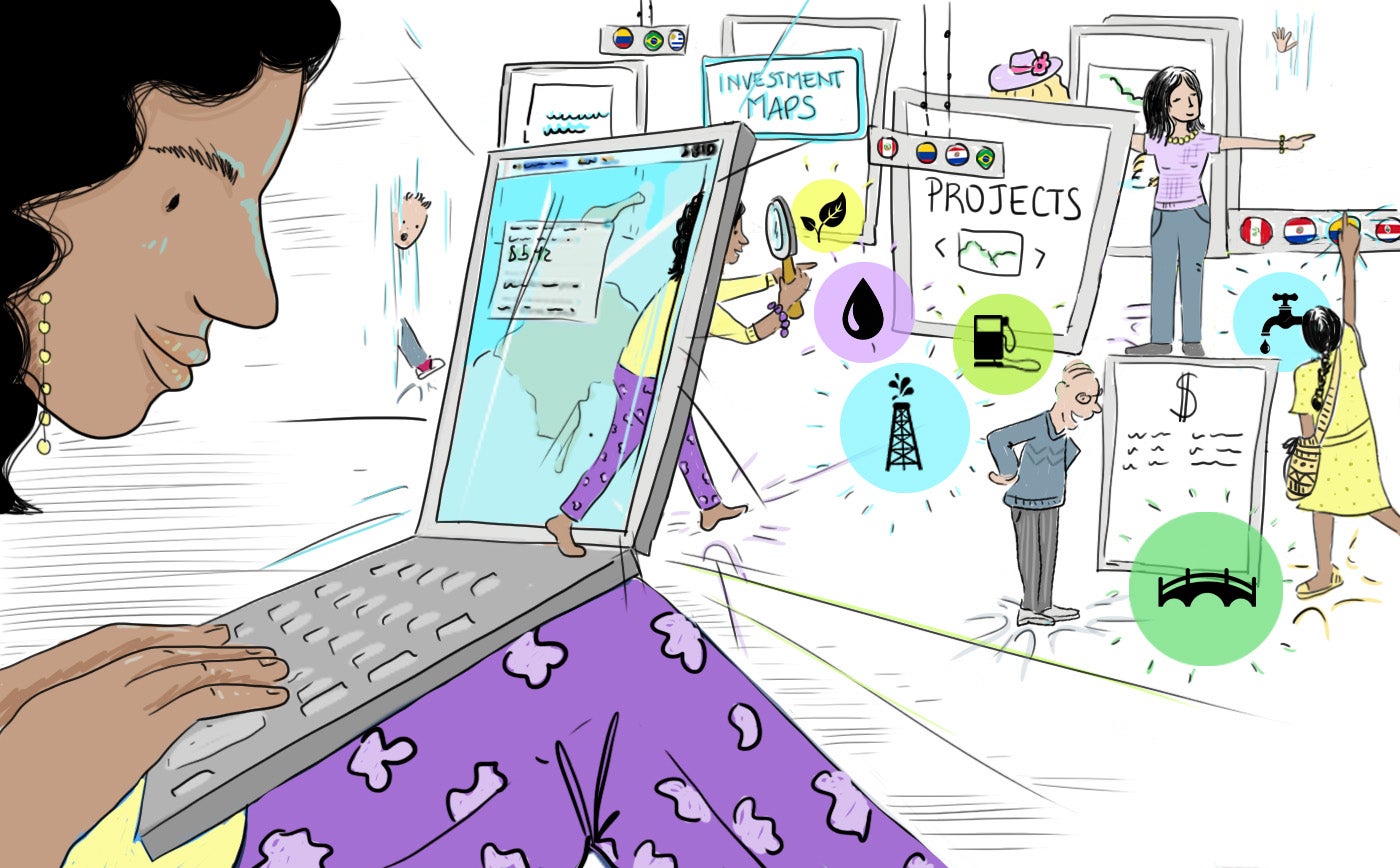 Facebook posts that include pictures result in an average of 180% more interactions compared to simple text posts. Including photos in LinkedIn increases the probability of having comments by 98%. The same thing happens on Twitter.

How are these statistics relevant to transparency policies? Very simple.

If a country wants to provide open access to information about public investments, it has a better chance of capturing citizens’ attention by including pictures or, even better, videos.

In 2014 the government of Colombia and the Inter-American Development Bank (IDB) launched the georeferenced platform called MapaRegalías (map of royalty payments). Royalties are the payments that oil and mining companies make to the Colombian government, for exploiting deposits of non-renewable resources.

MapaRegalías enables citizens to visually monitor public investments resulting from royalty payments in real time, including data on the cost of the project, its progress and who is entrusted with its implementation and supervision.

When the platform was launched, pictures of the actual projects were included alongside the data collected about execution of those projects. For the first time, those pictures allowed citizens to compare what official documents of government agencies said had been built against the actual public work built in a specific location. During the first three years of implementation, the gallery of pictures in MapaRegalías grew from 300 to almost 28,000, making it easier for everyday citizens to track multimillion-dollar projects.

Nowadays the digital revolution is helping to hold decision-makers accountable by bringing public matters under the scrutiny of the public eye.

A host of new technological solutions are redefining the role of transparency, going far beyond the mere disclosure of information. Civil society organizations and individual citizens can now check where public resources go and how are they being used.

Based on the results from MapaRegalías in 2016, the IDB launched the InvestmentMap regional initiative, aimed at developing online information management and visualization technology platforms to boost transparency in public investment projects.

As of today, InvestmentMap has been successfully implemented in Costa Rica, Paraguay, and Peru, and is being developed in The Bahamas, Jamaica, Argentina, and Trinidad and Tobago. In Paraguay, for example, some of the country’s most important infrastructure projects featured on the platform include videos filmed by drones.

The InvestmentMap platform displays data about public investment at your fingertips, including the physical and financial progress of each project in a simple and intuitive manner. The IDB has conducted field workshops with citizens, journalists and civil society in Paraguay, Costa Rica and Peru in order to ensure that the platforms are designed based on users’ capacities and that citizens are able to understand and use information intuitively

The fundamental concept for the creation of this web platforms is traceability. InvestmentMap allows the tracking of public resources, starting with where the funds originate and follows them until the project’s completion.

The tool is also an excellent weapon against corruption. In Colombia, thanks to InvestmentMap, the number of irregularities detected in public investment projects and referred to an oversight institution such as the Attorney General rose from 57 in 2013 to over 1,000 in 2016.

The InvestmentMap platform also enhances decision-making with respect to the planning and execution of projects. It has become a vital source of reliable and timely information.

In Costa Rica the InvestmentMap platform was included in the National Plan for Development and Public Investment (2019-2022) as one of the fundamental instruments for following up on the progress made on public infrastructure projects.

In addition, the multisectoral group of the Initiative for Transparency in the Construction Sector formed by the government, the civil society and private companies already uses the platform as an automated monitoring tool of public works.

When policymakers are not held accountable, corruption and inefficiency in public investment projects can go unnoticed, bearing profound economic and social implications. Corruption generates waste, scarcity, inflated prices, as well as bottlenecks and delays in public investment projects that result in a lower provision and quality of public goods and services, hurting the daily lives of citizens.

Technology can therefore play a significant role in disseminating information that allows for more accountability by empowering citizens. Our goal is to expand the project to other countries across the region and ultimately track 100% of public investments. What an immense challenge and at the same time tremendous opportunity to enhance transparency, anti-corruption and digital transformation across Latin America and the Caribbean.

If you want to learn more about the priorities of the IDB Group to support Latin America and the Caribbean, download our Institutional Strategy.