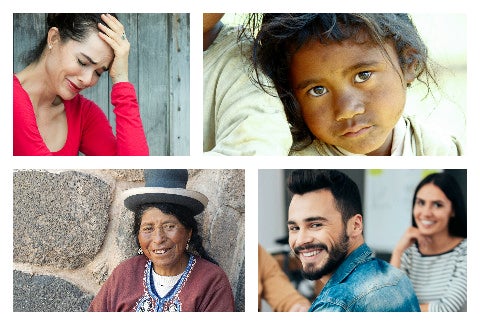 The mission of the IDB is to work with the countries of Latin America and the Caribbean to improve the lives of their citizens. However, this process is not an exact science, so it is not always easy to ascertain whether that objective is being achieved. How can we know for certain that Bank-supported projects are helping people live more prosperously?

Responding to this question is not easy, above all because measuring improvements in people’s lives can involve different factors. How can such a measurement be undertaken? By carrying out a cost-benefit analysis or an impact evaluation with experimental methodologies for a specific project? By calculating reductions in poverty rates? By measuring levels of satisfaction and happiness of citizens before and after implementation of a public policy?

At a recent presentation at IDB headquarters in Washington, DC, Gerardo Leyva, Associate Director of Mexico’s National Institute of Statistics and Geography (INEGI), showed us how his country is exploring new methodologies to understand whether or not Mexico is truly improving the lives of its people.

For a long time, no one doubted that GDP was the principal indicator to measure well-being. But is it sufficient? Is GDP really the best way to determine whether citizens are satisfied? Are citizens of a county happier the higher the GDP?

The search for responses to these questions led to the study of “the economics of happiness,” a joint endeavor of psychologists and economists from around the world. Since the 1970s, they have proposed alternative metrics known as “subjective well-being” or   “happiness” measures.

In broad terms, what this research approach suggests is that although GDP captures many dimensions of well-being, it is not sufficient to measure all the dimensions of satisfaction and happiness. INEGI conducted this type of study, surveying more than 44,000 Mexican households in the nation’s 32 states.

INEGI’s Self-Reported Expanded Well-Being Study, more commonly known as the Expanded BIARE, was conducted between August and November 2014. It combines objective measures of poverty from Mexico’s National Council for the Evaluation of Social Development (CONEVAL) with measures of subjective well-being. Those measures include personal autonomy, feelings of achievement, security, affection, family, friends, or feelings about having a purpose in life.

Can You Be Rich and Unhappy, or Poor and Happy?

Among other things, INEGI analyzed the correlation between being rich and being happy. Can persons with medium incomes (objective measure) be unhappy or dissatisfied with their lives (subjective measure)? And can a poor or vulnerable person be happy?

The findings of the study provide us with more information when designing projects to improve lives.

INEGI also found that the more education people have, and the higher their income levels, the more they report being satisfied with life.

So, does money bring happiness? Not necessarily, according to the research. To be married, to be male, and to have friends increase happiness. Married Mexicans are slightly happier than those who are single, and Mexican men report being happier than women.

The study also showed that a person’s family and social life bring more happiness. The study found that Mexicans with five or more family members in whom they can confide, and who have frequent social gatherings, are more satisfied with their lives than others. The empirical evidence indeed supports the proverb that “those who have friends have treasure.”

In all cases, the survey data prove that there is a strong association between extreme poverty and people being dissatisfied with their lives.

The study also presents a series of data on dissatisfaction to take into account. The level of satisfaction with life is lower than average in households where there is domestic violence or discrimination, or where a family member has psychological problems. The same is true in households where one or more people have problems with addictions such as those to alcohol or drugs.

Some European countries such as France and the United Kingdom have already started to work with these types of subjective measures of well-being, prompting the collection of data on these characteristics in their government statistics offices.

One example is the study by my colleague, Sebastián Martínez, who with his co-authors evaluated the impact on Mexican households of having a cement floor. Employing subjective questions about well-being like those used in the INEGI study, the authors found that in households with cement floors, there were improvements in the health of children, reduced psychological stress among mothers, and a more pleasant environment in which to live.

The information on subjective well-being can be a useful tool to evaluate public policies. Efforts such as those by INEGI should be strengthened, combining objective and subjective measures of well-being like those used in the study by Sebastián Martínez and his colleagues.

When all is said and done, there are no absolute truths when it comes to improving lives. Everything is relative to the context and the reality of the countries in which we are working.

Arturo José Galindo is the Manager a.i. of the Office of Strategic Planning and Development Effectiveness, and the Chief of the Strategy Development Division, at the Inter-American Development Bank in Washington, D.C. Previously he was the Regional Economic Advisor for the Andean Region at the same institution, Chief Economist of the Banking Association of Colombia, Advisor to the Ministry of Finance of Colombia on financial sector issues, Advisor to the government of Colombia on Coffee Affairs, Professor of Economics at the Universidad de los Andes in Bogotá, Colombia, Research Economist at the IDB, and an Economist at the Central Bank of Colombia. He holds a PhD in Economics from the University of Illinois at Urbana-Champaign, and Master’s and Bachelor’s degrees from the Universidad de los Andes in Bogotá, Colombia.