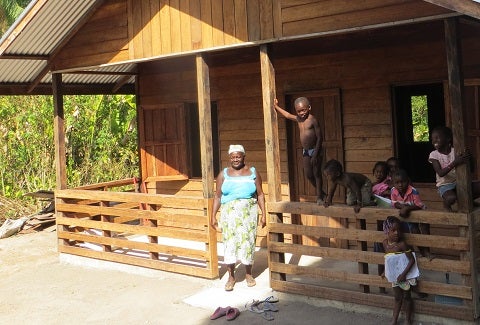 Maseja Amoloe is a single mother in Pikin Pada, a small Maroon village in Suriname’s hinterland. These villages have their own form of government rooted in Amerindian traditions such as birth rights, and are fully recognized by Suriname’s government. The villages are run by a kapiten, who functions as the highest local authority.

Like others in her village, Amoloe cultivates yucca, bakes bread, and sews for a living. She lived in a hut with her five children until November 2015, when a government housing program targeting rural villages reached Pikin Pada.

Amoloe was selected by the village chief as one of 20 beneficiaries to receive a $8,000 subsidy to build a better home. She now has plenty of space, sanitary facilities, and a good quality roof and walls.

Approximately 65,000 people, or 12 percent of Suriname’s total population, live in the hinterland, including around 150 villages inhabited by either Amerindian or Maroon groups.

Most of these villages can only be reached by dirt road, river, or small plane. Many lack electricity and depend on government generators that work just a few hours a day.

The initiative that helped Amoloe’s family and many others is the Second Low Income Shelter Program, financed by a $15 million sovereign-guaranteed loan from the Inter-American Development Bank (IDB).

The program is tailored to provide affordable housing options for the poor, including Amerindian and Maroon populations. Since its launch in 2011, it has financed construction of 200 houses and improvements on 1,800 houses, benefiting more than 2,000 families.

It took some trial and error to improve the hinterland housing stock. Building there is challenging: some materials are not readily available, transportation and supervision costs are high, and an adequate workforce is hard to come by because men, who traditionally worked in this sector, often migrate to find work.

Moreover, most beneficiaries are too poor to obtain a loan, and the communal ownership regime does not allow them to use land as collateral.

Four villages–two Amerindian and two Maroon–were selected for a pilot program to design a subsidy model tailored for rural areas. Beneficiaries were chosen by the kapitens based on need according to clearly defined criteria.

The upfront subsidy was set at $8,000 to cover most of the cost of building a 50-square-meter house with a water harvesting system, but beneficiaries still contributed in kind (materials, labor) or cash, according to their ability. For example, Amoloe provided sand, gravel, door locks, nails, and a PVC ceiling, and paid for the transportation of these materials.

The process started with a meeting where the kapitens explained the program, followed by a building and design workshop where village members drew their dream home.

A team of architects translated that vision into a small but functional unit that incorporated specific requests, such as, a bathroom accessible from the outside, a front porch, and the number of partitions within the structure.

Once the house was designed and the beneficiaries selected, the program negotiated the acquisition of materials that best worked for the project.

The construction process was guided by an architect and a village foreman, prioritizing hiring local workers, including women who helped in making bricks for the houses.

Initially, a single house was built in each of the pilot villages to incorporate lessons learned before scaling up.

The pilot trained community members in building techniques and provided a low-cost, streamlined, and replicable house design. Within a year, 100 houses had been built in eight villages, with many others on the waiting list.

Suriname’s program changed lives in some of the country’s most remote areas, providing housing for the poorest and most vulnerable in a sustainable and culturally appropriate way, all this while instilling a sense of pride in beneficiaries who contribute to the building process that incorporated traditional designs.

Carolina Piedrafita is a counselor to the Argentina & Haiti Executive Director at the IDB.

Carol Nijbroek is an operations senior analyst at the IDB Country Office in Suriname.