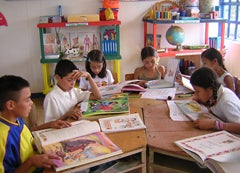 Caldas, Colombia. As part of the 30-year anniversary celebration of the alliance between Escuela Nueva and the Colombia’s National Coffee Federation, I was invited in 2012 to speak about public-private partnerships in education. The event included a presentation by five articulate, passionate and interesting teenagers about a science project on composting techniques to reduce waste in small farms. One of the teenagers told the guests that her family had incorporated some of these ideas at her farm.  All five of them were students from an Escuela Nueva school in this coffee region of Colombia.

Escuela Nueva is a large pedagogical model that started in the seventies in a handful of rural primary schools (grades 1 to 5) in Colombia. Nowadays it is used throughout the rural areas in the country in both primary and secondary (grades 6 to 11). What makes the model special is that there are very few new pedagogical models such as Escuela Nueva that have been implemented at scale in developing countries, as one recent post in the New York Times argues. Each school usually has one or two teachers each with a small group of students—typically six— from different grades who sit at hexagonal tables. The students work at their own rhythm with the help of special textbooks and workbooks (the guides) in subjects ranging from Spanish to natural sciences. The guides strike a balance between being highly prescriptive and being flexible. They contain practical examples and applications to rural areas. The teacher is a facilitator, visiting each table and helping the students with the readings and discussions. The governance of the classroom is shared between teachers and students; usually, there is a class president elected by students.

On top of this, it is difficult to attribute specific aspects of the model to this apparent positive result. One potential culprit is the “active student” philosophy of the model.  Another potential explanation can be found in the guides: they provide clear direction to teachers, at the same time they provide a flexible learning pace to the students. Perhaps, the success is the emphasis on skills such as group work, individual responsibility, and civic engagement. Maybe the alliance between private agents (the National Coffee Federation) and the local school districts drives the results. Or perhaps the success of the model rests on the tour de force of one of its founders, the formidable Vicky Colbert, recipient of the Clinton Global Citizen Award.

Economists have been interested in the educational interventions in Colombia for some time. For example, several evaluations of a Colombian voucher intervention (PACES), of different work policies, and of conditional cash transfer programs have appeared in top economic journals. To this end it has been puzzling that Escuela Nueva has not received the same treatment. The answer lies, I believe, in the lack of stronger evidence of its impact. As a comparison, let’s take the case of Charter Schools in the USA which have been the subject of a rich debate. There are three characteristics that make the Charter school model interesting. First, it is a new, different way to deliver public education, breaking the “business as usual” model in public education. Second, the potential improvements from the model are based on theoretical foundations of competition. Third, there are strong evaluations of the model. In the case of charters, the comparison group is credible since some districts use lotteries in assigning students to charters. Students who are not placed into a charter go to the regular public school, constituting a comparison group that has the same characteristics on average as the students who end up attending the charter.

Similarly to charter schools, Escuela Nueva has the potential to be policy disruptive and it is grounded in strong theoretical models. Escuela Nueva, like charter schools, is a model that can in a fundamental way change the operation of public schools. As such, Escuela Nueva can change the system from within. Escuela Nueva is based on theoretically-backed pedagogic models: it breaks the teacher-student relationship based on authority and puts an active student at the center of learning. However, unlike lottery-based charter schools, Escuela Nueva schools are not easily evaluated given the difficulty in constructing a valid comparison group. Perhaps this shortcoming explains the lack of traction among economist. Perhaps the lack of evidence is the consequence of being born in the seventies, a time in which evidence-based policies and strong impact evaluations were not the currency of the day.

Cities in Colombia are considering the model as a pathway to break with the inertia of the typical work of public schools. Likewise, other countries –such as Vietnam– are starting to implement the model. This current expansion presents both challenges and opportunities.  On one hand the urban setting requires substantial changes in the grade composition of each class, and adapting the guides to the urban setting and to K to 11. Urban teenagers have very different aims and attitudes than rural teenagers. Nevertheless, there are some encouraging indications from the nascent urban model, Escuela Activa, implemented in Manizales, Colombia.  On the other hand, the expansion is an opportunity for a stronger evaluation of the model. The urban expansion will potentially result in an over-subscription to these new schools and allowing school districts to allocate slots based on lotteries. Implementation of Escuela Nueva in other countries can use geographical random allocation of the model.

I believe that Escuela Nueva has the potential to change in a fundamental way the education in developing countries. However, I strongly believe that we need more evidence not only to guide in the development and implementation of the program but to convince policymakers of its relevance. Evidence-based policy is the new currency, and Escuela Nueva cannot escape this reality.