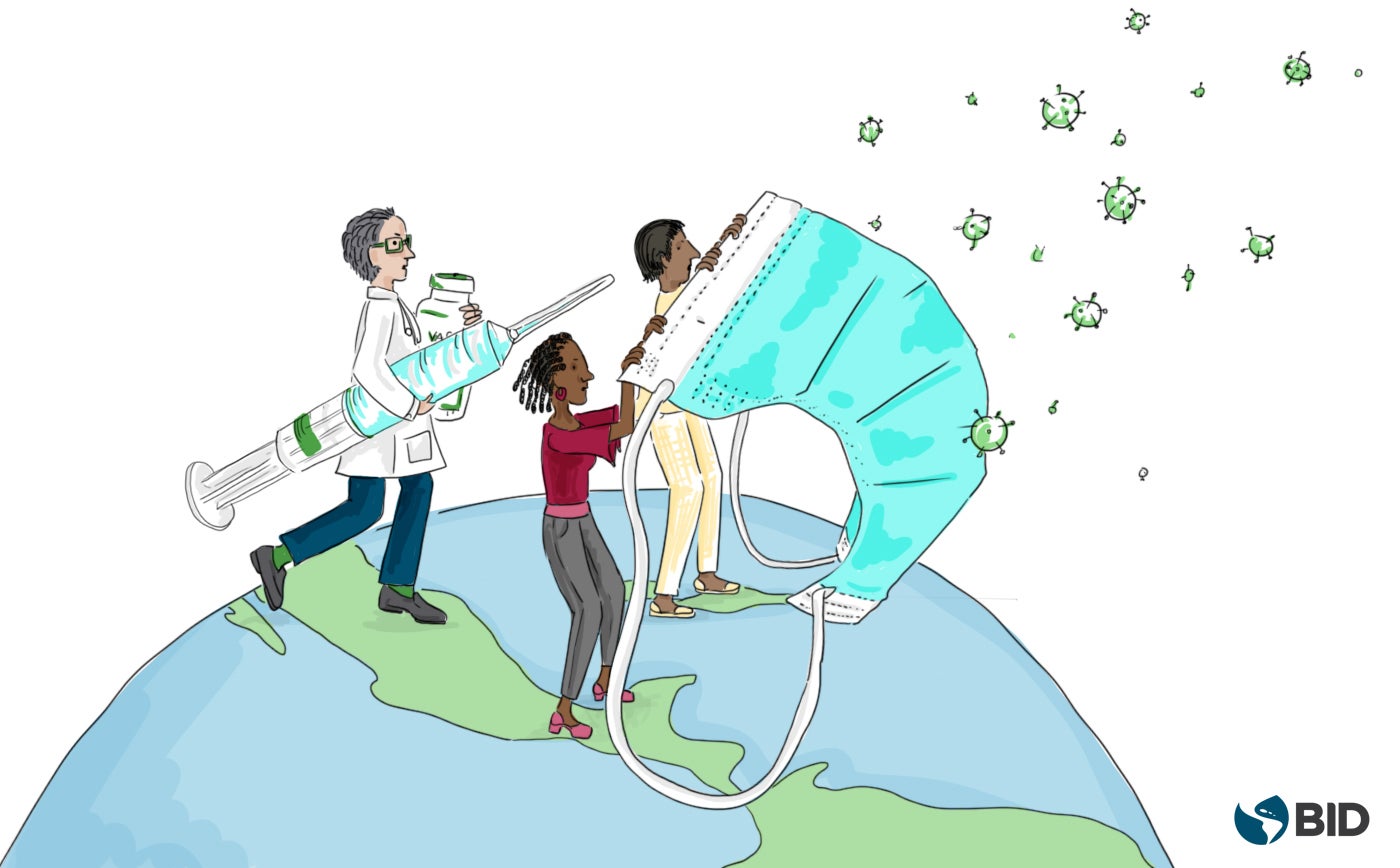 The year 2020 was unprecedented throughout the world, and Central America and the Dominican Republic were no exceptions. The effects of the COVID-19 pandemic, as well as those of Hurricanes Eta and Iota in some countries, caused the largest economic contraction in the region in recent history, surpassing even the effects of the 2009 global financial crisis. In the wake of the emergency, the IDB Group played a key role in the region; it increased its financing to historic levels and focused its response on the containment of the crisis, while also protecting the most vulnerable populations and economic sectors.

Since the first case of COVID-19 was detected in Central America and the Dominican Republic (from now on, “the region”) in March 2020, the rapid spread of the virus stretched the region’s already fragile health systems to the limits of their capacity. The strict containment measures, necessary to reduce infection rates, prompted a suspension of economic activity that resulted in a loss of employment and income for households.

With the aim of mitigating these negative effects on the most vulnerable population and on businesses, the governments approved emergency measures such as the expansion of social programs for cash transfers and credit moratoriums. Although necessary in the short term, these measures put pressure on public finances which were already facing limited fiscal space due to the expansion of expenditure over the past decade.

By the end of 2020, more than 1 million people in the region alone had contracted COVID-19, and more than 21,000 had died, with Panama being one of the most affected countries in Latin America and the Caribbean. The unemployment rate almost doubled, more than 2.8 million people fell into poverty (going from 31 to 37 percent of the population), and the regional GDP contracted by 6 percent in 2020, partially reversing the social and economic progress achieved over the last decade.

In the wake of an urgent need to control the pandemic and support the most vulnerable populations and economic sectors, the response of the IDB Group in 2020 was of historical scope. The region’s public sector lending program was significantly restructured to focus more directly on supporting the institution’s four priority areas to address COVID-19: strengthen health systems to combat the pandemic; provide income support to vulnerable families through temporary transfers; expand access to financing for small and medium-size enterprises (MSMs) with the aim to protect employment; and support sustainable fiscal management in order to alleviate macroeconomic impacts.

In a context of urgent needs for financing and limited fiscal space, countries also requested more fast- disbursing loans, which came in the form of (i) Special Development Loans (SDLs), that provide financial support during a macroeconomic crisis, in coordination with the International Monetary Fund; (ii) Policy-based Loans (PBLs), which provide budget support; and (iii) semi-standardized investment projects (called “prototypes”), of swift approval, that are based on the four areas of action previously mentioned.

Figure 1: Eighty percent of loans approved in 2020 were aligned with the response to COVID-19

In response to the crisis, the Bank increased its lending capacity in 2020, reaching historic records for the region in loan approvals (more than US$3.5 billion) and loan disbursements (more than US$3 billion). Disbursements to the public sector alone covered 31 percent of the additional fiscal expenditures of governments in response to COVID-19. Equally important has been the supply of financing at highly competitive rates in 2020, with a cost differential of 5 percentage points on average compared to market rates for the region.

During the past two decades, the Bank rapidly adapted to the changes in macroeconomic conditions in the region, responding with appropriate lending instruments to finance the region’s needs in times of crises. This can be seen particularly during the 2009 global financial crisis and even more in 2020, during the COVID-19 crisis (Figure 2). It also reflected in the net financing flows to countries (that is, disbursements net of repayment of debt with the Bank), which in 2020 were positive for all the countries of the region, tripling the decade’s average.

The IDB Group’s response to the private sector was also significant. In 2020, IDB Invest made record numbers of approvals and disbursements (US$1.34 and US$1.26 billion, respectively), focusing on ensuring the uninterrupted flow of credit to foreign trade and support for MSMs, agribusinesses, and firms in the tourism sector, as well as for basic service providers that suffered as a result of deferred payments. For its, part, the IDB Lab, the IDB Group’s innovation laboratory, invested primarily in innovations in tele-medicine, biosecurity, and electronic payments.

Given IDB Group financing of projects in 2020, we expect, among other results, to support nearly 17 thousand MSMEs in their recovery process, temporarily support the economic income of more than 3 million families, facilitate 1.7 million workers to receive unemployment relief transfers, and allow some 4,300 workers to receive transfers for job training, contributing to their job placement.

For more information consult The IDB Group in the Central American Isthmus and the Dominican Republic: Activities Report 2020.

If you want to learn more about the IDB Group contributions to the Sustainable Development Goals, please visit us www.iadb.org/SDGs

Catherine Alexis is an Operations Associate in the Department of Central America, Haiti, Mexico, Panama, and the Dominican Republic at the Inter-American Development Bank.